A Storm Is Brewing: Time to Vote Yes on W

All that lightning provided a beautiful show, but the accompanying rain did a number on our beaches.

The county’s 2,800-mile storm-drain system is designed to channel rainwater to the ocean to prevent local flooding. But it also carries tons of trash and bacteria-laden runoff directly into the Santa Monica and San Pedro bays following stormy weather.

A single major storm can send 10 billion gallons of water into our bays!

There’s another equally disturbing aspect to the runoff – it’s a huge waste of a precious resource.

Los Angeles imports costly and increasingly scarce water from Northern California and the Colorado River. We now import more than 80% of our water, using enormous amounts of energy and capital to do so.

The modest parcel tax would create a lattice of parks, green streets and wetlands throughout the region. Instead of sending runoff uselessly to the sea, the projects would capture and clean more than 100 billion gallons of water for reuse throughout the region. That’s enough to meet the water needs of 2.5 million Angelenos each year.

“It’s depressing to see all the waste on our shorelines after a big storm,” said Shelley Luce, president of Heal the Bay. “But it’s just as depressing to think about all that rainwater we are wasting. By approving Measure W, voters can turn a nuisance into a resource. This is a once-in-a-generation opportunity and we need to seize it.” 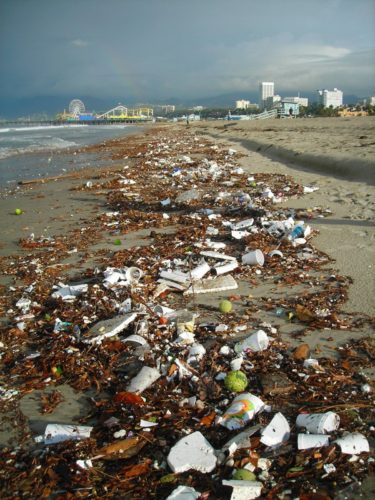 During the rainy season, Heal the Bay reminds residents that they can take steps in their own home to take pressure off an already taxed stormdrain system. Among them: keep trash out of gutters and stormdrains, dispose of animal waste and automotive fluids properly, and limiting runoff by curtailing such wasteful practices as hosing driveways and overwatering landscapes.

You’re Invited to ‘Honor the Ocean’ and MPAs at Zuma →