If you’ve enjoyed a day at Southern California beaches anytime over the past 10 years, take a moment to thank Kirsten James.

Kirsten has been Heal the Bay’s clean water watchdog for nearly a decade, most recently serving as our co-Science and Policy Director. During her tenure, beach water quality has steadily improved, with 93% of L.A. County beaches now getting A or B grades in our last annual report. Ever humble, she’d probably attribute the cleaner waters to drought and less urban runoff, but Kirsten and her team should take a lot of the credit.

Kirsten has now decided to take the next step in her professional career by exiting Heal the Bay to join the Boston-based nonprofit Ceres. She will develop a West Coast water program for the group, which catalyzes major industries to invest in sustainable practices.

Her years in the trenches of Southern California water policy will serve her new group well. Kirsten is a staunch defender of the federal Clean Water Act, standing strong in the face of many local challenges. She has played a pivotal role in ensuring that water quality standards are met in the region’s various water bodies and that dischargers are held accountable when they pollute our creeks, rivers and ocean.

It takes a unique blend of personality and knowledge to be an effective advocate. Kirsten’s success has been built on a bedrock of traditional Midwestern values. As a native Missourian, she’s industrious, self-effacing and unfailingly polite. Think of her as the Girl Next Door—but with an encyclopedic grasp of arcane water quality regulations and a dogged determination to see them enforced.

When our longtime president Mark Gold transitioned to UCLA three years ago, Kirsten had huge shoes to fill in taking over Heal the Bay’s water portfolio. After years of apprenticing under the famed environmental warrior, she now was calling the shots on water strategy and policy. Slowly but surely, she found her own voice and style, leading us to some remarkable wins. Among her most recent accomplishments:

The Bay is healthier than it was a decade ago, thanks to Kirsten. So are the swimmers—and marine animals—who frolic in it. As the modest Kirsten attests, still waters run deep. Very deep.

As Kirsten transitions to her new job, we asked some of her key partners to share their thoughts about her impact.

“Kirsten’s sharp critical analysis and tireless advocacy has truly shaped water quality programs, initiatives, regulations and legislation throughout the region. Our Bay and region is in a much better place from a water quality perspective because of the work that Kirsten has done. Her legacy will be felt by generations to come.”

“In all my years at Heal the Bay, no one wrote better technical comment letters than Kirsten. She was able to read the most complicated, technical, jargon-laced, draft regulations and develop clear, strong advocacy comments. Heal the Bay won on so many critical issues because of her analytical writing, and technical and policy skills.”

“Kirsten has been my comrade-at-arms for a decade as we’ve fought the marine debris battle. She always writes what needs to be written (no matter how complicated), and shows up at every meeting. She has pounded the halls of Sacramento even into the wee hours of the morning. She has worked harder than anyone to ensure that the environment is protected, and she has done it with a smile on her face, and her friendly hello. From our 4 a.m. flights (always working the whole time), to my hoisting her over a wall to take clandestine pictures of a nurdle factory, from utter dismay when the first state bag ban bills failed (I remember she got physically ill once, and had to take a sick day), to our zany attempts at plastic fashion wear, we have shared so much, professionally and personally. She is an invaluable colleague, and a treasured friend.

“The Bureau greatly appreciates Kirsten for her tireless support of the organization, in particular the Watershed Protection Program I oversee. Working on stormwater issues with us, Kirsten is truly a champion of the environment in California and has helped protect the water resources in our entire region.

Shahram Kharaghani, division manager for the L.A. Bureau of Sanitation.

“From the volleyball court to the hearing room, Kirsten handles tough situations with precision and poise. I’m honored to have spent the last nine years working with her at Heal the Bay (and two years beforehand together at graduate school). She’s never met a water policy acronym that she can’t break down. Kirsten’s leadership has led to many water quality improvements throughout Southern California that will be felt for decades. We will all miss her. 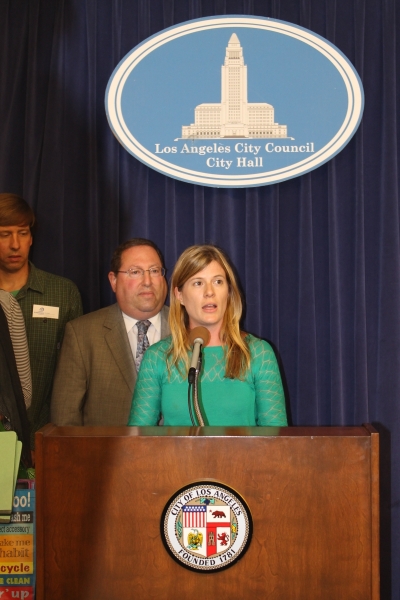 S.T.E.A.M. Machine Madness at the Aquarium →