Heading east, away from the beach and the surf, we were on a mission. The destination: Golden Road Brewing, just north of downtown. They had a special treat waiting for Heal the Bay staffers. Today was the day that the Heal the Bay IPA (India Pale Ale) would be tried and tested.

The partnership between Heal the Bay and Golden Road Brewing is a seemingly perfect match. The two-year old brewery, founded by Tony Yanow and Meg Gill, an avid surfer and swimmer, focuses on sustainability, local followers, doing things right for the community and jumpstarting a local movement of craft beer making. Other than the beer making, Heal the Bay’s focus has been on a similar trajectory for nearly 30 years.

The carbonation would be added later that night, but we sampled the essence of the ale, the brainchild of Golden Road’s team led by lead brewer Cole Hackbarth and brewmaster Jesse Houck. Both herald from places with histories of great brewers – Cole from Oregon and Jesse from San Francisco – but wanted to kick start that same passion in a place known for its love with food, drink and beautiful beaches: our home, Los Angeles.

When asked about how a beer that would represent Heal the Bay was created, I was given a beautifully worded description of the “two-row base malt, layered with three different hops (Citra, Centennial & Nelson Sauvin) that would bring about a citrus and fresh flavor to a light and drinkable IPA.” Yes I love it… but after a few more tastes and some casual banter in their “brewers” room, I got to see the artistic, yet scientific, nature of brewing at its best. Words that are associated with Heal the Bay, like “Summertime,” “Fresh” and “CLEAN” came up when they put their fine minds together to create a beer that would proudly wear the name of Heal the Bay. There it was! A beautiful partnership of a local brewer and their fine craftsmanship, representing Heal the Bay’s years of hard work to make our oceans, fresh, light and CLEAN – all in an IPA!

Golden Road’s Heal the Bay IPA will debut this Saturday when the new brew will be full of carbonation and available for everyone and anyone to try at the Santa Monica Pier for the Earth Day Blue/Green Festival. Just $10 gets you a sustainable bamboo pint mug and tastes of three different Golden Road beers at three Santa Monica Pier establishments (Big Deans, Rusty’s Surf Ranch and Santa Monica Pier Seafood) all the while supporting a clean ocean just in time for the start of summer. 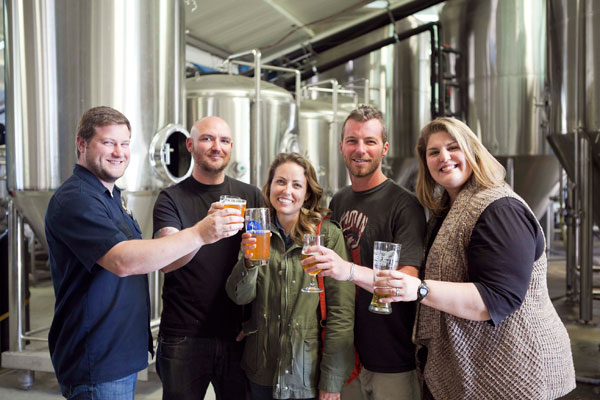 Bringing the Ocean to the Capitol →