FAQ: Is It Safe to Recreate in the L.A. River?

Aug. 25, 2016 — Popular recreation zones in the L.A. River suffer from elevated levels of bacterial pollution, according to a new technical report from Heal the Bay that analyzed water quality during the busy summer season. Here we address concerns people may have and share our vision for a healthier river. 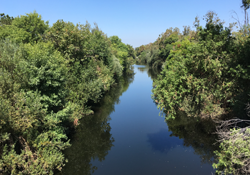 Why and when were they created?
The L.A. River was designated a “navigable” waterway back in 2010 by the US EPA, meaning that it’s protected by the Clean Water Act. This designation was the result of years of advocacy by many groups, including Friends of the Los Angeles River, NRDC, Heal the Bay, and other environmental groups as well as a group of kayakers and boaters who paddled 51 miles of the river to show that the river is in fact navigable (check out the documentary “Rock the Boat”). In 2011 a pilot recreation program was started in the Sepulveda Basin, and in 2013 the Elysian Valley recreation zone was opened. The zones are open for recreation during the summer months (typically from Memorial Day to the end of September) and during safe flow conditions.

Why is Heal the Bay testing water quality on the L.A. River?
Heal the Bay is well known for its Beach Report Card, which has provided A-to-F water quality “grades” each week for over 450 beaches in California since 1990. However, we’ve also been monitoring freshwater rivers, streams and creeks since 1998 through our Stream Team program. We believe that assessing water quality in a variety of waterbodies provides a clearer, more robust picture of environmental health throughout Greater Los Angeles. Recently, our focus has shifted to popular freshwater recreational spots, which, aside from the L.A. River, includes swimming holes in the Santa Monica Mountains. 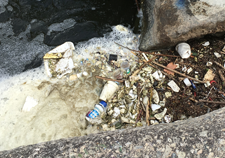 What kind of bacteria is Heal the Bay testing for?
Heal the Bay tested for two types of fecal indicator bacteria (FIB) — E. coli and Enterococcus. Our staff scientists — led by Dr. Katherine Pease — collected and tested water samples weekly for fecal indicator bacteria at three sites in the two recreation zones in the Sepulveda Basin and Elysian Valley areas of the river over a three-month period in summer 2015. Bacteria levels varied among the sites in the new L.A. River study, but overall were quite high. For example, samples for one type of fecal indicator bacteria, Enterococcus, exceeded federal standards 100% of the time at two sites in Elysian Valley (Rattlesnake Park and Steelhead Park) and 50% of the time in Sepulveda Basin. The Rattlesnake Park site also suffered from a 67% exceedance rate for E. coli.

What illnesses are associated with those bacteria?
FIB, while not necessarily harmful themselves, indicate the possible presence of pathogenic bacteria, which have been found to cause ear infections, skin rashes, respiratory illnesses and gastrointestinal illness. High levels of FIB are particularly concerning in areas where people come in contact with water through activities like swimming, fishing, and kayaking.

How does the bacteria get in the water?
The Total Maximum Daily Load, or TMDL, for the L.A. River identifies several contributors of harmful bacteria to recreational zones along the river: urban runoff, leaks and flows from wastewater collection systems, illicit connections and failing septic systems. Bacteria sources include pets, horses, wildlife, and human waste. 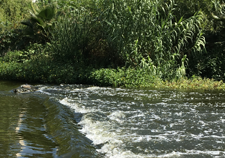 Will I get sick if I go kayaking in the L.A. River?
The odds are that if you go on a kayak trip on the L.A. River you won’t get sick. But there’s always that risk – especially if you don’t follow common safety procedures. We do know that the water quality is uncertain and known to have bacteria levels that are frequently over accepted thresholds. The thresholds that the US EPA and the Regional Water Quality Control Board have put forth are based on epidemiological studies and risk. Recreation in waters that are over accepted bacteria thresholds means that there may be an increased risk of illness when you come in contact with the water. An increased risk of illness is not a guarantee that you will get sick. Certain activities are more risky when water quality is poor; for instance, swimming and submerging your head is more risky than wading; swimming is more risky than kayaking; kayaking is likely more risky than hiking (at least with regards to picking up a waterborne illness), and so on, with the risk dependent on how likely you are to ingest or contact water. Whether we realize it or not, we all make decisions every day based on risk, such as driving a car, eating questionable leftovers, or playing a sport. Deciding what to do with this water quality information depends on the risk level you are comfortable with. 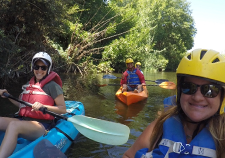 Does Heal the Bay support kayaking and other recreational uses on the L.A. River?
Heal the Bay has long advocated for public access to and use of open space and waterways, whether it is in Compton Creek, Malibu Creek State Park, Ballona Wetlands, or the beach. Benefits from utilizing these open spaces are clear in terms of individual and community health as well as fostering environmental stewardship and engagement. Less than 10 years ago we worked successfully alongside many partner groups to get US EPA to designate the L.A. River as a navigable waterway, in part so it could be used more for recreational purposes. Experiencing the L.A. River firsthand is an undeniable way to make a connection to a river that needs supporters and advocates; many Heal the Bay staff members and volunteers have kayaked the L.A. River over the years and will continue to do so. We also believe that the public has a right to know what the water quality of the river is and then to make an informed decision about how they want to experience the river.

I want to go kayaking. How do I book a trip?
There are a number of groups who lead kayak tours of the river. You can take your own kayak or steerable non-motorized boat down the river or you can book an individual trip or a group trip through the kayak concessionaires listed here.

What can I do to keep safe if I do go?
Swimming is not allowed in the Sepulveda Basin or Elysian Valley recreation zones. We recommend limiting your contact with the water, particularly avoiding hand-to-face water contact, entering the water with an open wound, if immunocompromised, or after a rainfall. After water contact, we recommend rinsing off with soap and water. We also encourage all visitors to learn about water quality and ask questions. Check the most recent water quality results from Heal the Bay. Bacteria-related water-quality information will be posted on this page weekly during the summer months or open recreation season.

Who is responsible for making sure the river meets clean-water standards?
The Los Angeles Regional Water Quality Control Board has the authority to enforce Clean Water Act guidelines for the L.A. River. The board issues permits and regulations for the L.A. River, such as discharge permits for water reclamation plants, stormwater permits for cities along the River, and Total Maximum Daily Loads (TMDLs) for pollutants, such as bacteria. A TMDL basically sets the amount of pollution that a waterbody can handle while still maintaining its beneficial uses, such as recreation, wildlife habitat, and groundwater recharge. There is a TMDL for bacteria pollution in the L.A. River Watershed; this document identifies entities that contribute to bacterial pollution and sets limits and timelines to achieve reductions in pollution. 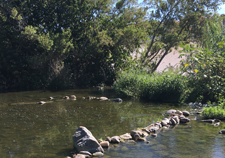 What does Heal the Bay envision for the river in the next few years?
We envision a river where people can explore, kayak, fish, and even swim without fear of getting sick. However, this goal is likely many years away. In order for this vision to be realized, community members and municipal and non-governmental agencies need to work together to support efforts aimed at reducing pollution in the river, such as stormwater capture projects. Heal the Bay is also advocating for more flexible funding options to support these projects. Understanding the impact that we as individuals can have is also key to making behavioral changes that can improve the quality of runoff entering the river – picking up after our pets, properly managing our trash, and not overwatering our lawns or washing our cars in the street.

In the meantime, Heal the Bay hopes to see readily available water quality information for people visiting the river, as well as more informative signage so that people understand the simple precautions they can take to minimize their risk of illness. Further, we will push for immediate abatement actions to reduce bacterial inputs, particularly in dry weather. For instance, if a stormdrain is determined to be a major source of bacteria, a low-flow diversion should be explored, where the runoff is diverted to the sewer system to be treated instead of reaching the L.A. River. 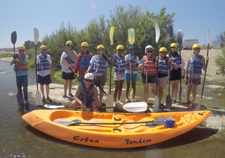 What can I do to help improve water quality on the L.A River?
Heal the Bay was founded on the principle of concerned citizens standing together to right an environmental wrong. In 1985, we pressured the Hyperion Wastewater Treatment Plant to improve its treatment process and stop discharging sludge into Santa Monica Bay. The same principle can be applied to the improvement and stewardship of the Los Angeles River. If enough people are aware of the problem, and commit themselves to collaboratively finding solutions, a healthy, clean L.A. River is within reach.

We urge Angelenos to explore and get to know their river, to pay attention to conversations about the River happening at council meetings and other agencies and make sure that their voices are also heard in these venues, and to support efforts that will lead to lasting change and improvements in the water quality of the river.

This FAQ is available in Spanish here.