FAQ: Why We Need to Restore the Ballona Wetlands

Apr. 15, 2016 — This summer the state of California is expected to release an Environmental Impact Report detailing various options for restoring the degraded Ballona Wetlands near LAX. Here we answer commonly asked questions about how to protect this critical habitat.

What are the Ballona Wetlands?

The Ballona Wetlands are located between LAX and Marina del Rey. These state-owned lands once comprised more than 2,000 acres of marshes, mud flats, salt pans, and sand dunes. Today they have been reduced to 600 acres of habitat that unfortunately are highly altered and degraded. Dredging conducted more than 50 years ago to create the harbor in Marina del Rey and flood control channelization have left a legacy of sediment and degradation.

Why are they important?

Wetlands are essential for our environmental and economic well-being. They provide nursery, shelter, and feeding grounds for fish and wildlife; purify water through filtration of pollutants; recycle nutrients; and provide a place where people love to walk, recreate and learn. Wetlands help buffer against the impacts of climate change by protecting us from flooding, storing carbon from the atmosphere, and maintaining vulnerable plant and animal communities. The benefits that wetlands provide can only be achieved when they are healthy and functioning. In areas like Southern California, which has already lost 95% of its wetlands, it is imperative to protect and restore these valuable habitats.

What kind of animals call them home?

Why do the wetlands need restoring anyway? What happened to them?

The channelization of Ballona Creek for flood control cut off the needed lifeline of freshwater to the wetlands; tidal gates near the sea also limit the influx of saltwater into the marshes, creating dried out wetlands that are no longer connected to the natural water cycle. The creation of Marina del Rey Harbor resulted in direct loss of wetlands; the mud and sediment that was dug out was subsequently dumped onto other areas of remaining wetlands. More than half of the Reserve has been taken over by non-native invasive plants such as mustard and ice plant, creating a habitat with reduced ecological, social, and economic value — but much potential.

What is the current plan for restoring them?

The process to restore this important state-managed habitat is underway. A report called an Environmental Impact Report/Statement (EIR/EIS) is set to be released this summer. The document will detail and evaluate four tentative alternatives, ranging from doing nothing to removing concrete to establish a more natural creek connected to the wetlands. The Army Corps of Engineers and California Fish and Game Commission will make the final decision together on the restoration plans. There will be a public comment period along with meetings where the public will get a chance to weigh in on the future of the Ballona Wetlands.

What does Heal the Bay want to see happen?

Once the EIR is released, our staff scientists will carefully review it and decide which alternative or combination of alternatives we support. Conceptually, we strongly support the restoration of ecological processes to create a thriving wetland ecosystem where there is also a place for people to learn, engage, and enjoy the wetlands. Heal the Bay hopes that the restoration project that is ultimately approved for Ballona Wetlands follows the nine Principles of Wetland Restoration, which outline practices of scientifically based successful restoration projects.

Why is there often public controversy about efforts to restore Ballona?

Many organizations care deeply about the Ballona Wetlands. However, some groups think that the wetlands should be left alone. Given the numerous scientific studies showing that the current wetlands are highly degraded and are continuing to deteriorate, Heal the Bay feels that not taking action will cause further and irreparable harm to an already diminished and compromised habitat.

What is Heal the Bay’s history at Ballona?

Heal the Bay has been active in the Ballona Creek Watershed for many years. Heal the Bay has and continues to act as an advocate for strong water quality and habitat regulations for Ballona Creek, Ballona Estuary, and Ballona Wetlands. Heal the Bay actively participated in setting important regulations to improve conditions such as the Total Maximum Daily Loads (essentially pollution limits) for metals, toxics, trash, sediment, exotic vegetation, and bacteria in Ballona Creek, Estuary, and Wetlands. Heal the Bay collaborates closely with Friends of Ballona Wetlands and other groups that work in the area such as Surfrider and Los Angeles Waterkeeper. Together, these four groups crafted the nine Principles of Wetland Restoration, and we have been sharing these principles publicly to educate about the importance of wetlands and the need for their restoration in a transparent and consistent manner.

What programs are there for the public to engage with the wetlands?

Heal the Bay has also been actively engaged in education, teacher professional development, and community outreach events in the Ballona Creek Watershed. During Coastal Cleanup Day 2015, the largest volunteer event in the world, Heal the Bay in partnership with Culver City, Friends of Ballona, and Ballona Renaissance hosted eight sites in the Ballona Creek Watershed. Our Key to the Watershed high school science program utilizes Ballona Creek as its classroom, taking high school students on bio-assessment field trips. Heal the Bay recently hosted a Youth Summit at the Playa Vista Library, educating high school students and clubs about biodiversity in the watershed and training them to participate in community science initiatives.

The Friends of Ballona Wetlands hosts a behind-the-scenes tour of the wetlands on the third Saturday of every month. Most of the Ballona Wetlands Ecological Reserve is closed to the public so this is a great opportunity to access the wetlands with the experts. They will guide you through salt marsh and dune habitats. You will get to see some of the 300 bird species that live in and visit the wetlands. If you’re lucky and there in the right season (summer), you may even see endangered El Segundo blue butterflies feeding on dune buckwheat flowers.

How can I stay informed about ongoing developments with the restoration?

Heal the Bay will be providing regular updates on our social media channels. But to get the latest news directly and to receive engagement opportunities please sign up for our Ballona email alerts here. 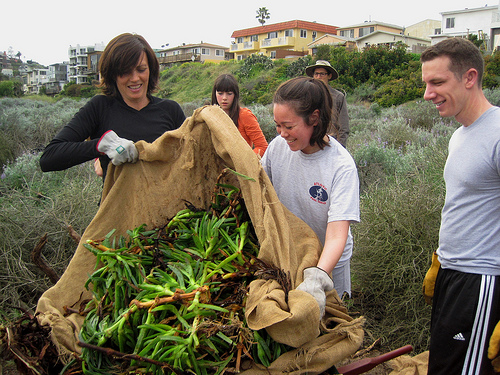 ← Heal the Bay’s Guide to Staying Safe at the Beach

Wow! What an Amazing Weekend For the Earth →