This morning, I joined Heal the Bay’s volunteer-driven Storm Response Team at Santa Monica’s Bay Street Beach to help pick up ocean-bound debris unleashed by the season’s first downpour. As Communications Director it’s my job to take photographs of the toll that pollution takes on our shorelines. A picture is worth a thousand words when it comes to getting people excited about urban runoff, which courses through city streets, catch basins and stormdrains and then dumps trash onto some of L.A.’s most popular beaches (see below). 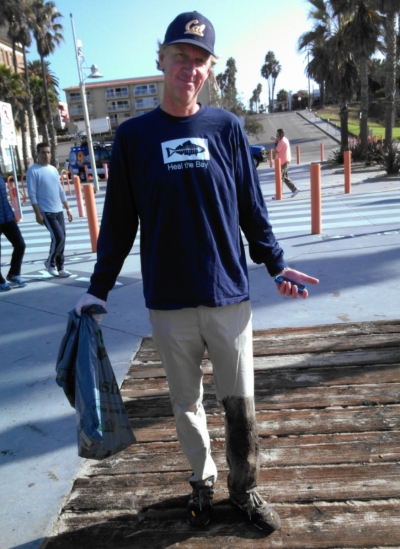 I found myself tiptoeing through the muck near the Pico-Kenter stormdrain to get a perfect shot of a soiled plastic bag perched atop a black-and-white soccer ball. Unfortunately, I took a misguided step and suddenly found myself thigh deep in a sickening sludge of brackish water, clumpy sand and very dirty trash.

A moment of panic hit as I began sinking deeper into the ooze. It felt like being in one of those cartoons you saw as a kid, when the hero gets trapped in quicksand. Just as I was about to whimper for help from my colleague Meredith, I thankfully hit hard ground. With a creepy slurping sound, I was able to extricate my leg from the quagmire and find solid ground. I was wet and I stunk, but I was safe.

Thankfully, the dozen or so other participants who came out from 8-9 a.m. escaped misfortune. Our group filled about 10 enormous garbage bags, stuffing them with the usual litany of depressing trash items: cigarette butts, plastic water bottles, fast-food wrappers, Styrofoam cups, snack-chip bags, straws, coffee cup lids, you name it. In all, we collected about 60 pounds of trash that otherwise could’ve migrated to the sea.

Considering that a single storm can pump as much as 10 billion gallons of runoff through L.A. County stormdrains, it’s not that surprising to see so much trash on the shoreline after rainfall. Still, after writing about pollution week in and week out at my job, it’s instructive and sobering to see all that trash in its not-so-natural setting. One post-storm cleanup will get you immediately rethinking your daily consumer habits.

Kudos to Heal the Bay board member Lisa Boyle for coming out to help, after dropping her child off at school. Lisa is an outspoken and tireless advocate against plastic pollution, so it was inspiring to see her walking the walk as it were and getting dirty with the other volunteers. I also was impressed with a friendly woman named Leslie Rockiteer, who was all set to go on her morning run by the beach. She saw the TV news trucks filming our group and then decided instead to grab some gloves and help us remove debris. 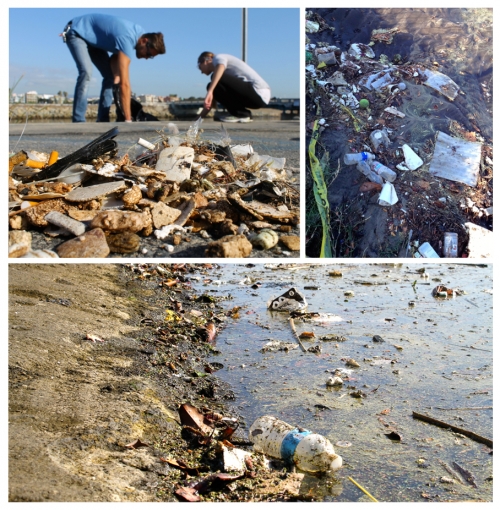 A few intrepid volunteers also joined our efforts along the rocky banks in Playa del Rey, removing a significant amount of derlict fishing gear in addition to clumps of cigarette butts and plastic detritus.

If you want to join us next time, we will be deploying the Storm Response Team as needed through the rainy season. Sign up and you’ll get an email with locations and details hopefully with 24 hours’ notice. If you can’t get to the beach, do your part and please remind friends and co-workers to kindly dispose of trash properly before it gets into the stormdrain system. It’s the single biggest step we can take in our everyday lives to keep our shores clean.

← Testing the Waters in Malibu Creek

Hands-on Science in Our Schools →

Tracy Quinn is joining Heal the Bay as our new CEO! Read our press release about why this big news upholds our commitment to science-based advocacy. View a farewell letter from Shelley Luce. Share this news with your networks via LinkedIn, Twitter, Instagram, and Facebook.