Sept. 20, 2014 — As with my children, I love all my Coastal Cleanup Day sites equally. But I admit that one type of site holds a special place in my heart.

To promote our biggest volunteer event of the year, I’m always on the prowl for oddball stories that capture the imagination of the media and general public. And the pier sites, where teams of SCUBA divers scour the ocean bottom to remove a truly bizarre hodgepodge of lost and abandoned items, never fail to deliver.

Over the years, we have found discarded wedding gowns and WWII-era gas masks underneath the Santa Moncia Pier. We’ve had to shut down the Redondo Beach Pier site when divers plucked what that they thought was a human skull from the seabed. Tests later revealed that the object was merely a very realistic anatomical model weathered by months (years?) in the sea. After 2011’s Coastal Cleanup Day, I spent a week in vain trying to track down an Encino woman, whose wallet we had found in the waves off the Santa Monica Pier.

And this morning was no different.

In rolling surf, a team of about a dozen divers underneath the Redondo Beach Pier recovered what looked like the sliding piece of a semi-automatic handgun. Local police came down to retrieve the gun part and begin an investigation. Who knows, maybe a criminal tossed it off the pier?

Then, as I headed back to the office, I got word that divers in Malibu Pier had also found a handgun! Cue the opening theme music from “NCIS: Los Angeles.”

One side note more germane to our mission: Before finding the weapon, the Redondo divers discovered four octopuses and at least 100 crabs trapped or entangled in fishing line and other manmade trash. 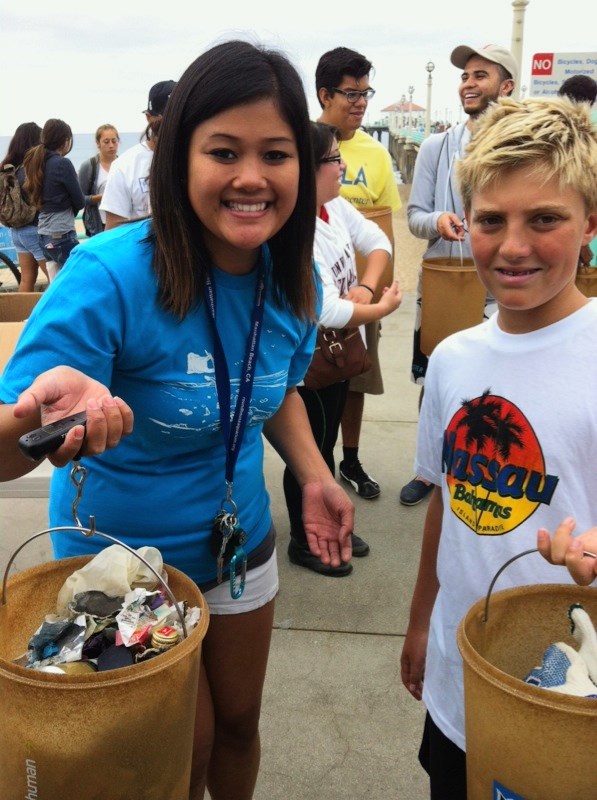 The 11,155 volunteers who participated this morning in Heal the Bay’s 25th Coastal Cleanup Day didn’t unearth anything as dramatic as a cephalopod or a Glock. Instead, they helped collect and dispose of the everyday items that comprise the bulk of trash in our beaches and inland waterways – cigarette butts, food wrappers, bits of Styrofoam, plastic bottle caps and the like. Scattered in piles, this detritus looks like an archaeological dig, a telling testament to our throwaway culture and how we treat our natural places.

That said, a few unusual items made this year’s blotter of found objects. Among them: a horse saddle and cash register (Agoura Hills), a manhole cover (Compton Creek), a video promoting a transgender beauty queen contest (L.A. River) and a Pepsi soft-drink can from 1994 (King Harbor).

The final trash tally reveals that volunteers removed 30,480 pounds of trash at 49 locations, spanning 42.5 miles. That haul adds to an already impressive amount of trash collected by Heal the Bay during Coastal Cleanup Day over the past 25 years – more than 1.7 million pounds. That’s equal to the weight of two fully loaded 747 passenger jets!

We can’t possibly clean up all the litter that mars L.A. County shorelines, rivers and parks in three hours on one Saturday. It is a great day of action and community, but education remains the lasting benefit from Coastal Cleanup Day. A single morning on the beach, creek or park will empower tens of thousands to take steps in their daily lives year round to protect our beaches, neighborhoods and waterways.

After years on this job, it’s clear to me that most Angelenos still have no idea how the stormdrain system works. So it’s enlightening to go to cleanup sites and watch our site captains explain how urban runoff carries pollution directly to local beaches. You can almost see behaviors changing when participants learn that a cigarette butt tossed carelessly on the street in Pacoima, or a fast-food wrapper chucked out of a parked car in Beverly Hills, will ultimately find its way to sea.

Coastal Cleanup Day always lifts my spirits. Besides being good media fodder, the massive volunteer mobilization affirms my belief that L.A. residents care deeply about our work and the local environment. A cross-section of greater L.A. rallies to protect what they love — be it sororities from Cal State Northridge, soccer teams from Lincoln Heights, small business owners from Long Beach, surfer groms from Hermosa Beach or high school students from Compton. It truly takes a village to heal a bay.

Not to worry, if you missed today’s cleanup. You can still do your part. Our Programs staff hosts monthly beach cleanups throughout the year all over L.A. County. Come join us. You might be surprised about what you find.

For a photo roundup from some of today’s cleanup sites, check out our Flickr album. More pictures to come! 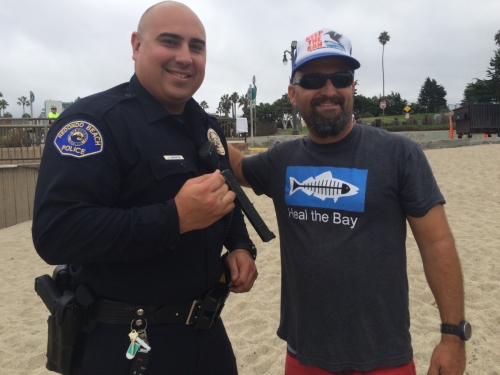 Sniffing Out the Truth About Orca Poop →