Heading Into the Great Blue Open

August 11, 2015 — Communications Manager Nick Colin stepped away from social media one morning for an unforgettable boat trip to Palos Verdes.

This is what I repeated to myself as I held on to the gunnels of our speeding, swell-hopping cruiser. It was 7 a.m. when we left Redondo Beach’s King Harbor, bound for Palos Verdes to collect seaweed for the Aquarium. Before, I had assumed our seaweed rations were replenished by mail or procured at a local seaweed shop. Turns out, one must embark on a lusty maritime expedition every week to feed the fishies.

At the helm: two salty cubanos: José Bacallao, our longtime Aquarium operations manager, and Lazaro Serrano, his fellow aquarist. They were born with sea legs, and thus had no problem singing and dancing to a medley of top 40 hits while also captaining and navigating. I wanted to join in, but didn’t want to go overboard…literally.

After about an hour, we reached a site known for top-shelf aquarium fare like Macrocystis (kelp), Egregia and Plocamium. Laz dropped anchor and we began suiting up. Not only was the water wintry at 58 degrees, but José cheerfully announced that the surge was strong and underwater visibility was next to nil. I hoped my wetsuit was thick enough to conceal my pounding heart. I thought fondly of my cubicle.

José and Laz slipped into the water with a casualness I’d never known; I had to be coaxed in like a reluctant toddler. I managed a clumsy back-roll into the churning waves and gave the requisite “I’m ok” signal–which was only partly true.

Once I got my bearings, I began looking. Up at the golden cliffs of Palos Verdes, down into the emerald-turquoise depths, around at the vivid blue wildness. I found myself in a Whitmanesque rapture, making peace with sharks and guessing the Pantone color of the waves. But while I dithered, José and Laz had already set to work harvesting seaweed with an automatic elegance. I snapped out of my reverie and dog-paddled fast through thick snarls of kelp to catch up.

Breathe, dive, cut, surface. Repeat until exhausted. I thought I would take a stab at it, but came up empty-handed. Not 35 pushups hard, but I’m really not sure my body can do this hard. I resigned myself to documenting José and Laz’s labor as best as I could.

Once they’d collected about 20 lbs. of seaweed (and I’d snapped about 100 blurry GoPro photos) we lumbered back aboard. José was satisfied with the haul and charted a course for home. We idled over a particularly lush kelp forest, dragging our nets along the surface to collect tiny mysid shrimp–a special treat for aquarium omnivores. José said he’d never netted so many before and attributed the bounty to my good shrimping juju. I swelled with pride.

The cruise back to Redondo felt quicker than the journey out. I peeled off my wetsuit and air-dried on the deck, tracing our wake until it disappeared into the waves. 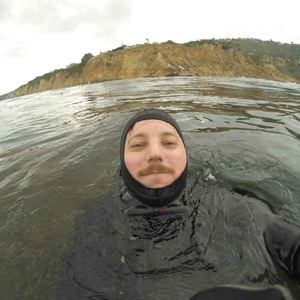 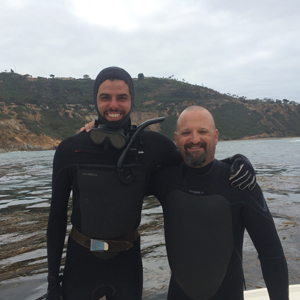 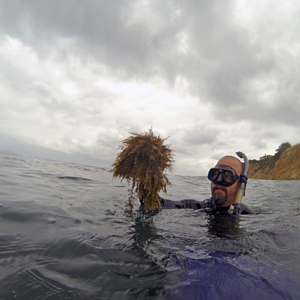 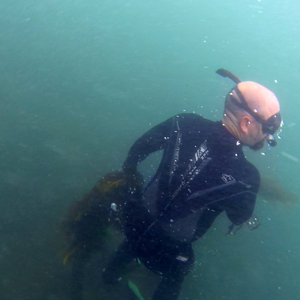 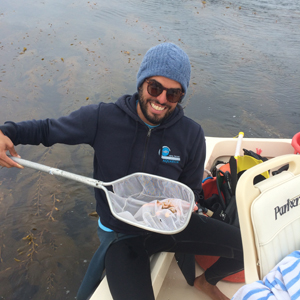 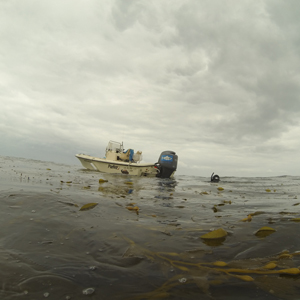 Clockwise from top left: Author Nick bobbing blissed-outedly; Laz and José; José with a handful of Plocamium; the S.S. Dorothy anchored off Palos Verdes; Laz with a netful of mini mysid shrimp; José surfacing after a dive for kelp.

← 5 Reasons to Be Wary of Desalination