Kicking off El Niño Week, Heal the Bay staff scientists and program directors have assembled simple answers to the complex questions about what El Niño may bring to your home, our beaches and greater L.A.

What does El Niño mean anyway?

El Niño is a global climate event that occurs at unpredictable, two-to-seven-year intervals. The hallmark of El Niño is more than a year of above-average surface temperatures in much of the Pacific Ocean. This has impacts on weather over most of the world, but can mean more rain for the southwestern U.S.

The direct translation from the Spanish word means “the little boy.” According to one version of the name’s derivation, Peruvian fisherman noticed a pattern of unusually warmer waters around Christmas time and called it “El Niño” in reference to baby Jesus. Scientists in Peru adopted the name and evolved the meaning when they recognized more intense and irregular changes in climate within seven-year intervals seen throughout the entire Pacific Ocean, not just along the coast of Peru. 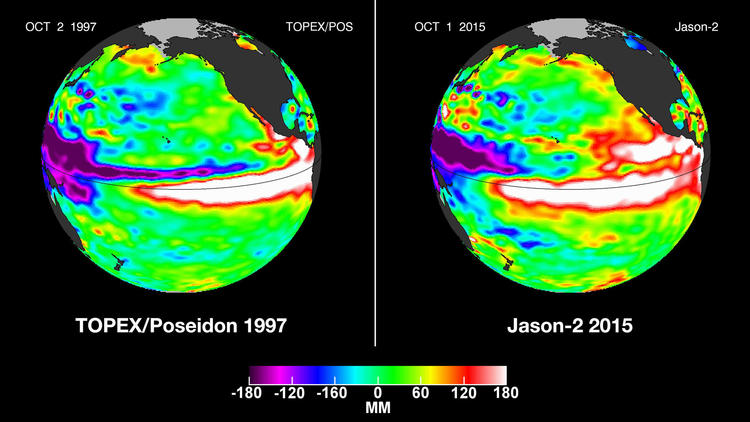 What causes an El Niño?

An El Niño is caused by the prolonged warming water temperatures in the Pacific Ocean. It occurs alongside Southern Oscillation, which is the change of atmospheric pressure over the eastern and western Pacific Ocean. Because they happen at the same time, El Niño and Southern Oscillation are often referred to as ENSO. Today, scientists use ENSO and El Niño interchangeably, so El Niño does refer to the entire phenomenon.

With a decrease in atmospheric pressure over the eastern Pacific, we also see an associated decrease in the westward blowing Trade Winds along the equator. This allows the warmer waters to travel north, and during heavy El Niños the subtropical jet stream can move north. The subtropical jet stream usually runs over Mexican and Nicaraguan rainforests. If it were to move over the southwestern U.S. this year, we could see heavier rains and a stronger El Niño.

When is it coming?

We will be feeling the effects of El Niño in the late fall/early winter of 2015. We already have experienced some early signs, with unusual stretches of humidity this summer and our thunder storms in July from Hurricane Dolores (warmer oceanic waters help to fuel hurricanes). The effects are expected to diminish in spring 2016.

Will it definitely bring heavy storms?

Experts predict a 95% chance of moderate El Niño conditions to continue into the winter, which may bring rain to California during a few large rain events.  El Niños don’t guarantee rain and can be unpredictable, which is why you probably heard discussion on the matter on-and-off for years without seeing a lot of rain. Some El Niño years have remained dry while others have produced epic rains.

The last major El Niño we saw in Southern California was in 1997-98, and the above average ocean temperatures this summer have mirrored the ones we saw in 1997. As of now, we are seeing predictions of El Monstruo-type storm events this winter. 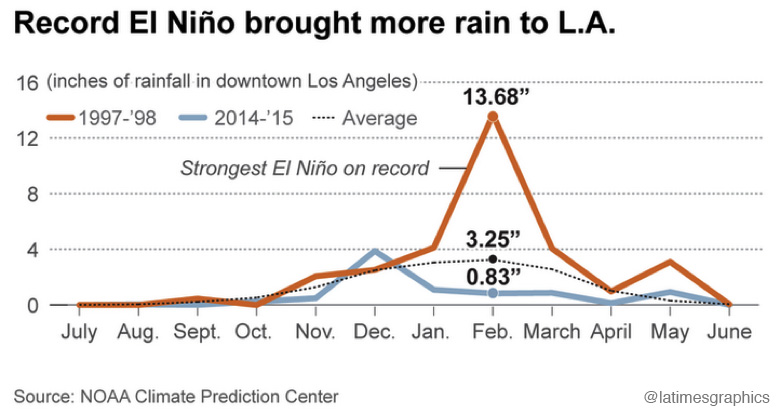 How much rain are we talking about?

The ocean temperatures suggest that we will see an El Niño that matches, and may even surpass, the strength of the 1997 El Niño, the strongest on record (represented by graph on right). In February 1998, downtown L.A. saw 13.68 inches of rain, which is almost equivalent to a full year’s worth of rainfall seen in only one month. If it does indeed mirror 1997, we could see double the rainfall in Southern California. However, this is all dependent on the wind patterns, which we have yet to see. These uncertainties make El Niño so unpredictable and why we keep speaking in terms of hypotheticals.

A Godzilla El Niño refers to an exceptionally strong El Niño that can actually move the subtropical jet stream over California. We have only seen these Godzilla storms in the El Niños of 1982-83 and 1997-98.

What areas in L.A. will likely be hit hardest?

El Niño events can bring much rain to Southern California, which can result in mudslides, erosion and flooding. Homes located in areas known to be at risk of mudslides will likely be hit hardest–for example, houses built on the side of steep mountains or hills. Also, any areas in L.A. that have storm drains that are clogged by trash and debris could experience flooding in their neighborhoods. If you find a gutter that’s blocked, call the City’s Storm Drain Hotline at (800) 974-9794 so that L.A. Sanitation can remove the debris before the rain hits. (And look out for our blog post later this week on how you can better prepare your home for expected rains.)

If it rains, will it mean the drought is over?

No. California has 43 million acre-feet of water storage in reservoirs, and 75% of that storage is located north of Fresno. The majority of the rains are expected to hit Southern California, and currently our regional infrastructure is not set up to store rainwater or dry weather runoff. The system is designed to move rain water to the ocean as fast as possible. Only 12% of Southern California drinking water comes from locally captured rainwater seeping into our groundwater. It might temporarily relieve drought effects, but it is not the silver bullet answer.

A good analogy is relating the drought to using your credit card: an El Niño winter is like paying off the minimum balance on your credit card. You have temporary relief, but you still have a lot of water debt to pay off from the water you took out before. Our depleted reservoirs require much more water to reach healthy and secure levels.”

Is this a sign of the future? Are storms going to continue to be more intense?

Climate change impacts are already happening now in L.A., and can be intensified in an El Niño year. Impacts from climate change along our coasts include increased storm intensity, ocean temperature increases, changing currents, sea level rise, species range shifts, coastal erosion, and ocean acidification. To make matters worse, a combination of impacts may collide during an El Niño year — such as high tides, sea level rise, storm surges, and inland flooding. The projected inundation could severely impact our freshwater supplies, wastewater treatment plants, power plants, and other infrastructure, not to mention public health and the environment. (See our blog post later this week about how climate change could impact local shorelines in Venice and Malibu.)

I thought rain was a good thing. Why is Heal the Bay worried about it?

Yes, we desperately need rain in our drought-parched state. But rain creates urban runoff — the No. 1 source of pollution at our beaches and ocean.

What is “stormwater capture” and why is Heal the Bay so excited about it?

The L.A. region now imports more than 80% of our water from Northern California and the Colorado River watershed, using enormous amounts of energy and capital to do so. In an era of permanent drought, we simply must do a better job of using the water we already have by investing in innovative infrastructure projects that capture and reuse stormwater instead of sending it to senselessly pollute our seas. Runoff — if held, filtered and cleansed naturally in groundwater basins — can provide a safe source of water for human use. 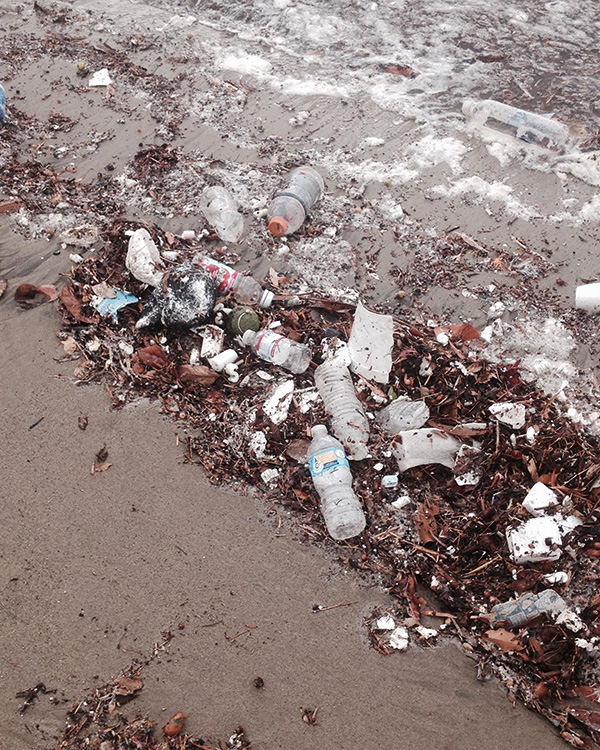 How does rain create pollution?

Rimmed by foothills and mountains, Los Angeles County is like a giant concrete bowl tilted toward the sea. When it rains, water rushes along paved streets, picking up trash, fertilizer, metals, pet waste and automotive fluids before heading to the ocean via the region’s extensive stormdrain system.

How do stormdrains trash the beach?

With memories of historical deluges on their mind, engineers designed L.A. County’s 2,800-mile stormdrain system in the ‘30s and ‘40s to prioritize flood prevention.  Moving stormwater out to sea quickly was their number one goal. But it also has the unintended function of moving trash and bacteria-laden runoff directly into the Santa Monica and San Pedro Bays, completely unchecked and untreated. An average one-inch storm will create about 10 billion gallons of runoff in L.A. County stormdrains. That’s 120 Rose Bowls’ worth of dirty water.

What does all this runoff to do the ocean and the animals that call it home?

Hundreds of thousands of animals each year die from ingesting trash or getting entangled in manmade debris. Seawater laden with chemicals and metals makes it harder for local marine life to thrive and reproduce.

What about the human health impacts?

Beachgoers who come in contact with polluted water after storms face a much higher risk of contracting illnesses such as stomach flu, ear infections, upper respiratory infections and skin rashes. A UCLA epidemiology study found that people are twice as likely to get sick from swimming in front of a flowing stormdrain than from swimming in open water.

How can ocean lovers stay safe during the El Niño months?

How can I support Heal the Bay’s efforts to make L.A. smarter about stormwater?

El Niño Checklist: Are You Ready? →