This trashcan tells quite a tale, discovered more than 2,500 miles away from our Santa Monica base on a Hawaiian beach.

Researchers found the intact plastic trashcan emblazoned with Heal the Bay stickers while they were surveying 2011 Japanese tsunami debris at Ki’i Dunes on Oahu.

Mallos and colleagues from the Japan Environmental Action Network, the Oceanic Wildlife Survey and the Japan Ministry of the Environment just completed the beach survey in Hawaii in search of tsunami debris. 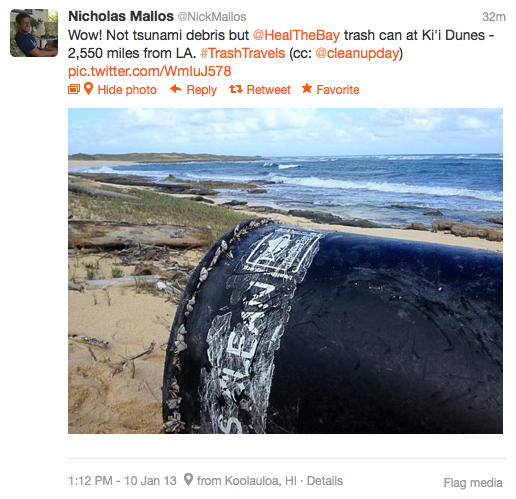 The Hawaii survey turned up masses of typical ocean garbage, including fishing nets and traps, Mallos said, noting the irony of also finding a “Heal the Bay” trashcan.

The problem of typical ocean trash is inextricably linked to the issue of tsunami debris, Mallos continued. Tsunamis aren’t preventable, but regular ocean litter is, he said. Apparently even trashcans can become part of the problem.

You can help reduce the problem of plastic in our oceans by ditching one-time use plastics and going reusable instead, from grocery bags to coffee mugs and water bottles.

UPDATE 1.22.13: A Hawaiian Islands Land Trust employee reported today that another Heal the Bay trashcan has washed up in the Aloha state; this time along the shoreline of Maui’s Waihee Refuge.

Become part of the plastic pollution solution: Join a cleanup effort, our Speakers Bureau or the many other ways we offer to get involved.