L.A. Kings Give Back to Their Kingdom 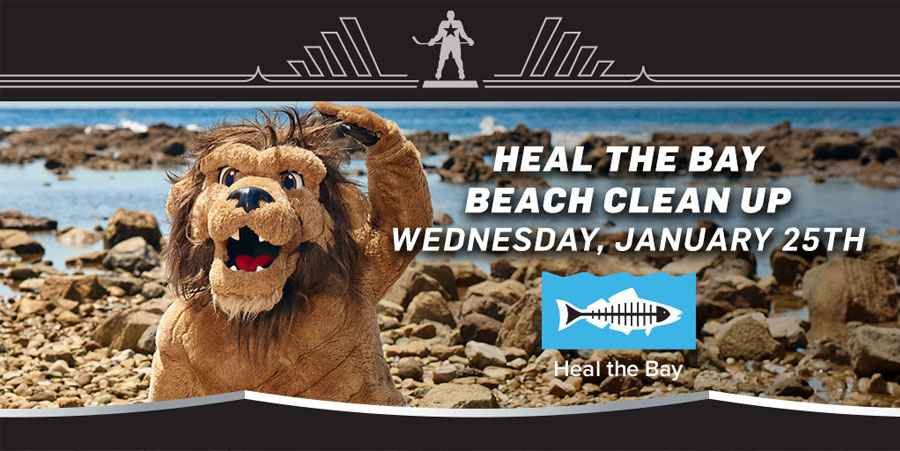 The L.A. Kings and Heal the Bay are lacing up their flip-flops for a multi-site beach cleanup on Jan. 25. Here, communications director Matthew King muses about sports stars on the sand.

OK, I’ll admit it. I’ve become a little jaded after participating in dozens of beach cleanups.

As a Heal the Bay staffer, I know exactly what we are going to find (a disheartening mix of chip bags, plastic bottles, and bits of Styrofoam). And I know exactly what participants’ reactions will be (“OMFG, look at all these disgusting cigarette butts!”).

I have another admission to make – like most Angelenos, I’m a bit star struck. You’d think after years of working as an editor at The Hollywood Reporter early in my career, I’d be more blasé about celebrity. But I still get a charge out of seeing stars out in the wild – especially at one of our events. I still proudly carry my green reusable bag signed by #4 Luke Walton, former forward and current coach of the Los Angeles Lakers, at our downtown rally in support of L.A.’s plastic bag ban.

Cleanups and celebs are an interesting mix. The stars usually come on their own time and out of their own volition, without makeup artists or publicists in tow. So out of respect, I’m not going to name names. But we’ve had several Oscar- and Emmy-winning performers roll up their sleeves with us and humbly mingle with the general public. I’m proud to say I haven’t seen an ounce of ego or attitude.

As a hopeless sports junkie, I’ve had the most fun working with L.A.’s professional sports teams. I’ve picked up trash with former Lakers center Andrew Bynum, probably the only time I’ve participated in a cleanup with someone taller than I am. (I’m 6’6” – Kobe Bryant size, as I like to say.) 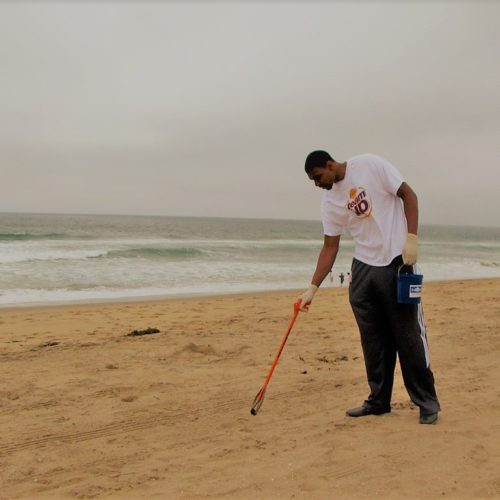 Ex-Laker center Andrew Bynum helps pick up trash off of the beach.

Former All-Star Dodgers outfielder Matt Kemp and I scoured for bottle caps beside the Santa Monica Pier. (I think he was dating Rihanna at the time, and I can tell you he is one handsome dude.) 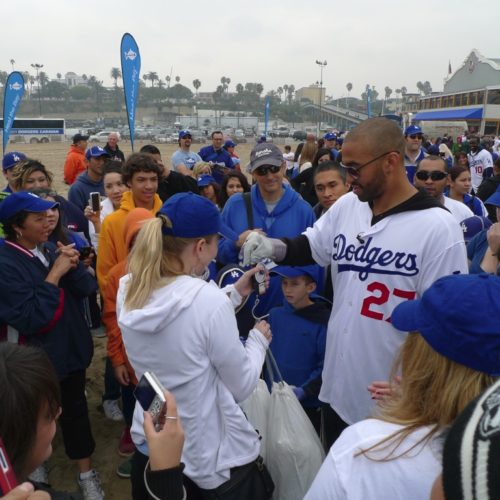 But my favorite cleanup of all time was with the L.A. Kings in 2008, the year I started working at Heal the Bay.

I even allowed my young teenage son to skip school that day and help out, just to show him that working at a nonprofit has a little bit of cool to it. Hockey is my favorite sport, but that isn’t what made the day so memorable.

When a sports team hosts an event with us, two or three athletes will typically attend. But at the Kings cleanup in Redondo Beach, every player on the roster, except one, participated. This was 10 a.m. in the morning following a tough game the night before at Staples Center! I don’t know if the Kings have a culture of strict discipline or genuine community connection, but seeing two dozen players happily canvassing the sand on a foggy morning really impressed me.

Since then the Kings have gone on to win two Stanley Cup® championships. (I was in the house when defensemen Alex Martinez tucked in a reflex rebound at Staples Center to secure their second Cup against the New York Rangers!)

They’ve also grown into a great partner with Heal the Bay and have been honored at our annual Bring Back the Beach gala for their community outreach programs. Check out the video below to learn more.

Defensemen Matt Greene lent his voice to one of our most important battles – last year’s successful coalition effort to reject a ballot measure that would have allowed oil drilling beneath the Hermosa Beach seafloor. And all the other Kings live along the South Bay shoreline, so it’s no surprise they care about our local beaches.

In advance of this year’s NHL All-Star Game at Staples Center, we are hosting a volunteer cleanup at three locations on Wednesday afternoon, January 25. You can register and get more details here. (You might have to play hooky from work, but we can have one of our two staff Ph.D.s write you a doctor’s note!)