No, it’s not the stuff of a sci-fi horror movie. Rather, it’s a troubling series of misfortunes befalling sea stars along the Pacific coast of North America. This winter, divers and tidepoolers are encountering numerous sea stars with white lesions that eventually decompose body tissue into a goo-like blob.

These keystone predators are victims of “sea star wasting disease,” a fast-moving infectious disease that has occurred along our coast for decades, but not at the recent widespread level. Reports of disintegrating sea stars have come from as far north as Anchorage, Alaska, to our shores along Palos Verdes, and down south to La Jolla.

Scientists first described the symptoms in 1978, and several outbreaks have occurred since. Warmer water temperatures led to massive sea star die-offs in Southern California in 1983-84 and again in 1997-98.

This year’s epidemic began in Washington in June; since then at least 12 different species of sea stars and even some purple sea urchins have been found as victims of the wasting disease. By September, the disease had become widespread along the Pacific coast. The progression of symptoms can be very rapid, with initial signs leading to death within a few days.

Sea stars, in particular ochre stars, are an important keystone species that have the potential to dramatically alter rocky intertidal community composition. Removal of this top predator from intertidal ecosystems can affect the whole food chain. After the 1983-84 wasting event, ochre stars were absent along Southern California’s shoreline for years.

Collaborative research teams are studying affected sea stars, keeping a close eye on any cascading on the food chain and local habitats. Scientists aren’t sure what is causing the disease. Suspected factors include warm water events, low oxygen levels, and ocean acidification. Past outbreaks on the West Coast were traced to bacteria, while a recent East Coast wasting disease was linked to a virus.

Scientists ask the public to keep an eye out for infected sea stars and urchins. If you see any possible infections while out in our local intertidal and subtidal seas, please report your findings to seastarwasting.org 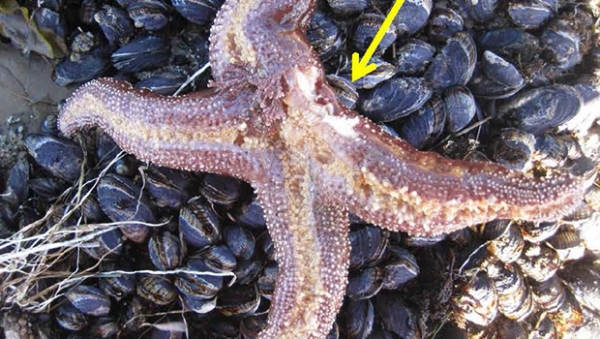 White lesions on the surface of sea stars are sure sign that wasting disease has taken root.

← The World in a Blade of Kelp

Mystery of the 'Disappearing' Pesticides →