Heal the Bay staff scientists Sarah Sikich and Dana Murray report on the latest efforts to save Malibu’s troubled Broad Beach from erosion and sea-level rise.

Ocean waves lapping against a golden sandy strand of beach in Malibu, low tides exposing rocky reefs full of tidepool animals in Lechuza Cove, and a healthy beach dune habitat providing homes for endangered snowy plovers and sand dune critters. Is this the Broad Beach of the past, or a vision of the future if environmentally sound restoration comes to this erosion-challenged shoreline?

Since a rock revetment was placed in front of homes in this well-to-do community four years ago, the beach has seriously eroded.  Faced with sea level rise and waves eating away at the beach in front of their properties, homeowners are proposing a combined rock revetment and sand nourishment project to restore the beach and protect their homes — a fate that the California Coastal Commission and State Lands Commission will ultimately decide.

If approved, the undertaking would be the largest beach nourishment project in the state. But the stakes are much greater than the fate of this one mile stretch of sand. What happens at Broad Beach is a bellwether for how California beachfront communities address climate change and sea level rise, stressors that are sure to increase in the coming decades.

After years of collaboration and research, a coalition of environmental nonprofits led by Heal the Bay and the Surfrider Foundation presented thoughtful recommendations to the California Coastal Commission at its December meeting on how to balance coastal habitat protection with home protection through the proposed Broad Beach restoration project. The good news is that we witnessed strong leadership and efforts to protect the environment from Coastal Commissioners, which resulted in the homeowners withdrawing their project proposal after a seven-hour discussion to make some refinements based on the recommendations provided at the hearing.

Although Heal the Bay supports the idea of a restored sand dune and beach system at Broad Beach, the project as proposed would bury tidepools and seagrass habitat in the adjacent marine protected area and threaten water quality along this popular stretch of coastline. We have been working with homeowners and agency staff to recommend a project that meets the needs of the homeowners, while protecting the unique habitats off Broad Beach.

Most Commissioners indicated support for many of our recommended changes to the project, such as limiting beach and dune nourishment activities to regions that would least impact the marine protected area and getting rid of septic systems along the beach. Great environmental leadership and direction were especially shown from Commissioners Bochco, Zimmer, Groom, and Shallenberger. Commissioner McClure chimed in on water quality and said: “The residents of Broad Beach need to fix their toilets. No. 1 issue. There needs to be an aggressive plan for septic systems.” She also emphasized the importance of marine life protection: “We need to protect our MPAs … We have some of the best protections in the world. … We can’t be putting hundreds of thousands of yards of sand in an MPA where we have important marine life.”

However, just as the Commission made a motion to vote to approve the project with many of our recommended improvements, the homeowners stepped up to the podium and withdrew their application. Realizing that the vote would likely require significant changes to their project, the homeowners elected to spend more time working together to refine the proposed project and resubmit their application to the Coastal Commission early next year. We hope to see more of the science-based recommendations we have been advocating for in the next version of the project.

Heal the Bay will continue to work to ensure that the biggest proposed beach nourishment project in California is the least environmentally damaging as possible, and sets a good precedence for adaptation to sea level rise. We will also advocate for strong monitoring of whatever project moves forward at Broad Beach, as there are many questions about coastal environmental impacts of such a large-scale project and the stability of a dune restoration atop a rock wall. 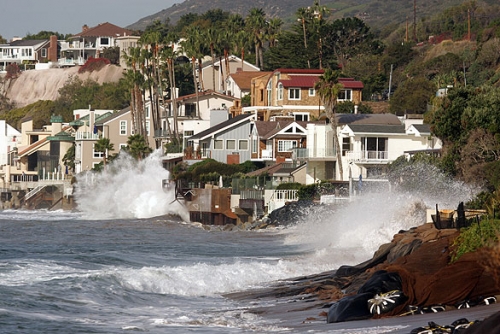 Sea level rise and erosion have taken their toll on Malibu’s Broad Beach.