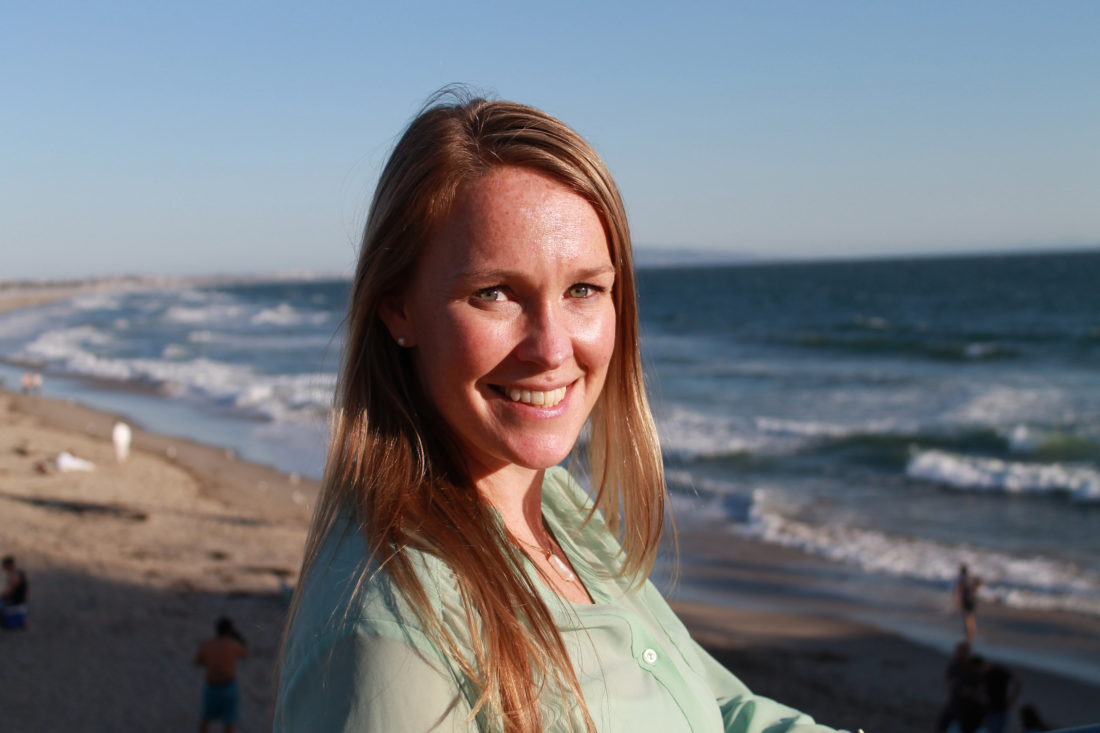 Vice president Sarah Sikich exits Heal the Bay this week after 13 amazing years of service to our coastline and inland waterways. She’s moving to Carpinteria with her husband and young daughter, taking on a new challenge as a Director of Development for Principal and Leadership Gifts at the University of California at Santa Barbara. She’ll stay connected to the ocean, helping strategize and fundraise for marine and environmental sciences, among other duties. Here she shares some thoughts about her accomplished career at HtB:

A friend and mentor, Paula Daniels, recently asked me what I was most proud of during my Heal the Bay tenure. Surprisingly, I found it an easy question to answer.

That’s not to diminish the other important work I’ve had the privilege to complete over the past 13 years. There’s just something about these three efforts that resonates with me. Personally, I’m proud of the inner tenacity I found to reach the finish line in each race – often in the face of stiff opposition. Professionally, it feels good to have helped lead initiatives that will provide environmental protection in California and beyond for decades to come.

The campaigns were all incredibly complex and protracted, and I only played a small part in making them happen. But, they each challenged me in ways that I couldn’t have imagined, and helped me learn a lot about myself and qualities necessary to succeed in the environmental arena. Here are some lessons learned: 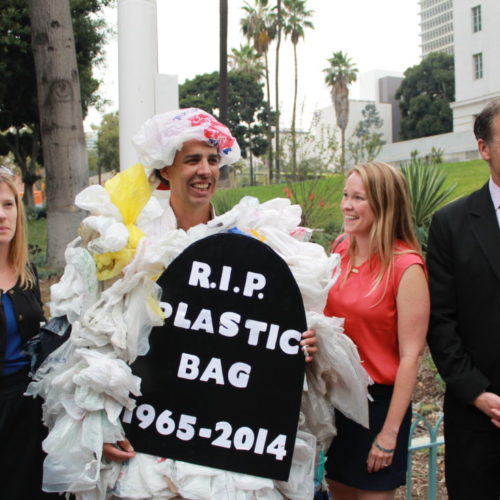 When Heal the Bay first started to work on statewide plastic pollution prevention legislation in 2007, we sponsored a flotilla of five bills collectively called “The Pacific Protection Initiative.” Each bill addressed a specific aspect of pervasive plastic pollution: pre-production plastic pellets or “nurdles,” lost fishing gear, polystyrene food containers, toxic plastic additives and plastic bags. The bills all supported actions called out in the Ocean Protection Council’s landmark 2007 resolution on marine debris. Naively, I thought the plastic bag ban had the best chance of passage because it seemed like a no-brainer. Society already had a readily available alternative to single-use carryout bags — reusable bags! Alas, only one bill passed though — AB 258, which prohibits pre-production pellet discharge at plastics facilities.

It took a full decade to go from concept to reality for California to become a plastic bag-free state, thanks to the voter passage of Proposition 67 in November 2016. No single person or entity can claim ownership of this victory – it required leadership from dozens of municipalities, environmental groups, community groups, scientists, agencies, businesses, and legislators. Some close friendships grew through this effort, with people I will carry forwards with me, including Angela Howe, Kirsten James and Meredith McCarthy. And, for me the statewide bag ban is the archetype for the wise words of my friend and mentor, Leslie Tamminen: “Policymaking is not a sprint, it’s a marathon.” Even with a practical alternative, it took California 10 years to enact its plastic bag ban. 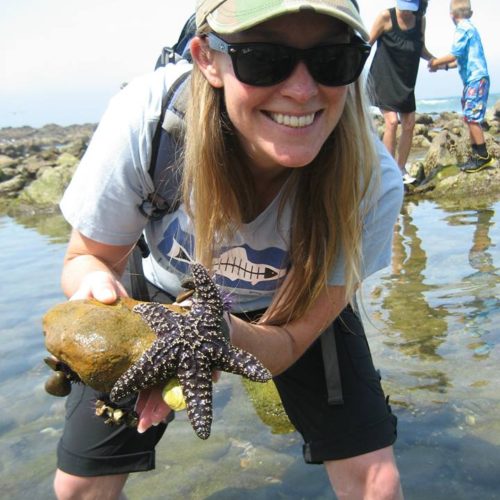 Designing Southern California’s network of marine protected areas (MPAs) required enormous amounts of diplomacy and compromise. On one hand, environmental groups felt very strongly we had to protect our most valuable ocean habitats from fishing pressures; on the other, the angling community felt very strongly that reduced fishing access placed an unreasonable burden on its members. As one of 64 people negotiating about where these underwater parks should be located, progress could not be made without building alliances and finding common ground. It was difficult to hone the diplomacy skills required to figure out the moments to give in and when to stay firm. Finding common ground often proved elusive, given the diverse set of stakeholders – from commercial and recreational fishermen to environmental groups and municipalities.

I had seen the mediation and science-based deliberation prowess of my colleagues to the north – Karen Garrison, Kate Wing, and Kaitilin Gaffney — who had gone through a similar process establishing MPAs off California’s Central Coast. And, I worked hard to channel their knowledge and approach. Still, in the toughest of times I found myself frustrated, exhausted, and in one moment overcome by tears.

I now realize that the strenuous process made me tougher and stronger. All that hard work means that I can take my young daughter kayaking, snorkeling, and tidepooling within MPAs that I helped design for Southern California. I can show her rich areas of life that are more abundant and diverse, and now protected, because of the work so many devoted people, including her Mama, did. It is a source of pride.  I will forever be grateful for the support of colleagues who became friends during the toughest moments of MPA design and adoption – Dana Murray, Jenn Eckerle, Samantha Murray, Marce Graudins, Phyllis Grifman, Lia Protopapadakis, Calla Allison, and others.  Even when it took a circuitous route, the compromises made throughout this process allowed for California to go from less than 1% to roughly 16% of our coastal waters safeguarded by MPAs. 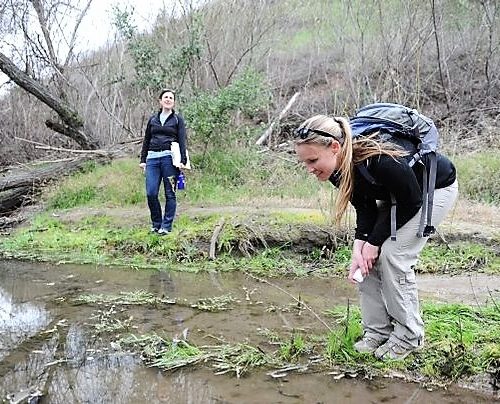 Heal the Bay’s niche in the water world is advocating for science-based solutions to environmental problems. Our methods vary, from making policy recommendations based on citizen science and scientific literature to partnering with university researchers to advance new studies to fill data gaps. Our recommendations often stir controversy – and downright anger. They often require behavior change and/or financial outlays that some opponents resist quite vigorously.

Heal the Bay’s effort to revitalize the Malibu Creek watershed marks one of the most involved and contentious projects on which I have ever worked. We evaluated over a decade of water quality and habitat data taken through our Stream Team citizen science program to inform a comprehensive report on the State of the Malibu Creek Watershed. The data compilation and analysis efforts required meticulous work by our entire scientific team, including Katherine Pease, Mark Gold, Shelley Luce, and Sarah Diringer. The final report included pages of recommendations, many of which have been realized. These include the restoration of Malibu Lagoon, certification of a strong Local Coastal Plan for the Santa Monica Mountains, and the current work of Las Virgenes Municipal Water District to greatly increase water recycling at its Tapia wastewater treatment facility. All these efforts will reduce pollution in the watershed and Santa Monica Bay, while protecting habitat and wildlife in one of L.A.’s most important natural areas. But as with many issues in the Malibu area, local residents dug in their heels to fight what they perceived as environmental overreach.

After we released the report and advocated for its policy recommendations, my colleagues and I experienced name-calling and bullying, and attempts to undermine our credibility from people who didn’t agree with its findings. I even had people viciously calling me out in the lineup at Malibu as I surfed the waves at First Point. At times it was tough to keep focus on the work and not feel deflated by all the personal attacks and distractions. But, the success of the report’s outcomes is a strong reminder that there is great value in taking the high road. It is incredibly rewarding see the positive results of projects with science on their side, like the Malibu Lagoon restoration that has greatly improved water quality and wildlife diversity in this important wetland habitat.

I feel great pride in the protections that I’ve helped advance for the vibrant coastal and ocean resources throughout Southern California. And, after over a decade of work at Heal the Bay, I realize that it’s not the natural resources that move me the deepest. It’s the dedicated people working so hard to protect what we love. I hold a particularly special place in my heart for the women water warriors that I’ve come to know through this work, as they are a powerful and impressive force of positive change-makers.

I had the treasured opportunity to work with Dorothy Green, Heal the Bay’s founding president, for a few years. In the brief time we shared, she taught me the importance of empowerment. She had an amazing ability to help people reflect on and find the individual value that they could bring to a cause, empowering them to take leadership in that area and be the change. She did that for me when I was fresh out of graduate school beginning work on my first project at Heal the Bay – ocean desalination.

By that time she had moved on from Heal the Bay, and I imagine that she had no idea who I was or what I could bring to the topic. But, she listened to me and made me feel valued, as if she knew I would provide meaningful contribution to the effort. I’ve carried that support with me throughout my time at Heal the Bay, and have tried to invest it back into Heal the Bay’s staff, interns, and volunteers as I’ve grown in my career. This type of empowerment made a huge difference for me, and I believe it is imperative to continue to cultivate in future leaders. We need to help smart young leaders grow and learn so they can be ready to conquer challenges yet to come.

As I wrap up my final days at Heal the Bay, it’s hard not to get lost in the check list of tasks to close out and set forth a path of transition. Of course that’s just the nature of work, but it’s also probably a bit of a coping tactic to avoid sitting with the deeper feelings of working at a place that has meant so much to me personally and professionally. Heal the Bay is such a big part of my heart and identity. Working on environmental issues about which I am deeply passionate, and around such amazingly bright and dedicated people has been a true gift that I will carry forward with me to new endeavors.

← BioBlitz in Malibu Lagoon with iNaturalist

Why We’re ‘Camera Trapping’ Along the L.A. River →