Statewide Bag Ban on the Horizon

Heal the Bay CEO Ruskin Hartley shares his thoughts on a very good day for the prospect of a statewide ban on plastic bags.

I came back to my desk on Wednesday to a pink Post-It note letting me know that state Sen. Kevin de León’s office had called. The note was simple: Please call back. It was “quite pressing.”  His staff wanted to invite Heal the Bay to speak at a press conference on Friday announcing that state legislative leaders had finally come together and forged a compromise on a new bill that would ban single-use plastic bags across the state.

After seven long years and several Heal the Bay campaigns, it appears that the end is in sight for single-use plastic grocery bags across the state. While SB 270 still needs to make its way through both houses and off the Governor’s desk, we are optimistic — now that  two of the Senate’s heaviest hitters are behind it. (Assemblymember Ricardo Lara also joined the conference, helping solidify the bloc of local Democrats who historically have had concerns with elements of past bag-ban proposals.)

If SB 270 moves forward, California will become the first state in the nation to pass a comprehensive ban on single-use plastic bags. 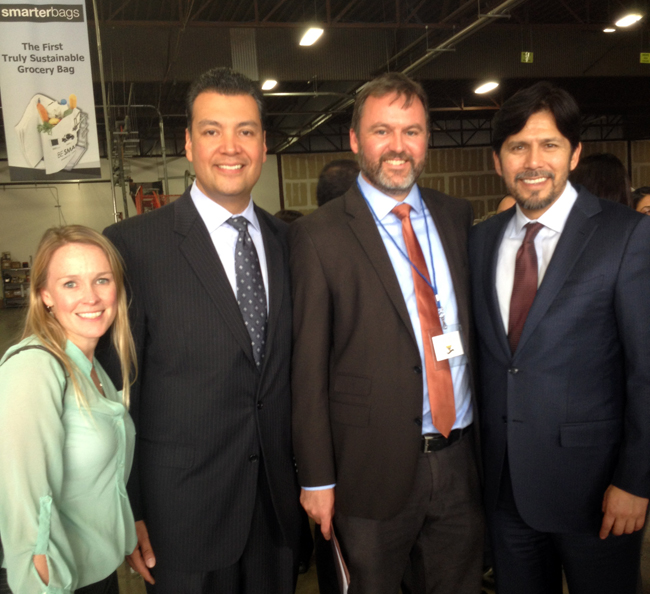 Yes, people will criticize it from both sides – as either going too far, or not far enough. But this afternoon at the press conference at a manufacturing plant in Vernon it was heartening to see voices from labor, manufacturers, community groups and the environment come together. Everyone can rally around a solution that shows that California continues to lead on issues that are good for the environment and business.

We started this campaign with our colleagues in the environmental community seven years ago. This issue would not even be on the radar screen of the Legislature were it not for the voices of our supporters and other concerned groups around the state.

Today, bag bans cover 90 municipalities in California, creating a regulatory hodgepodge and a patchwork of environmental protections. When the state acts comprehensively, we’ll have taken a big step forward that can serve as inspiration for the rest of the nation. We will help tackle the scourge of marine pollution and urban blight, and show that being green can also support our economy. Thank you!

High Flying, Adored: MPAs From Above →