Feb. 24, 2015 — Well, it looks like it may be time to bring back our Bag Monster. We thought we had put our symbol of Big Plastic out to pasture with last year’s passage of a statewide ban on single-use plastic bags. But the plastics industry has thrown millions of dollars into a voter referendum to halt the common-sense legislation.

The California Secretary of State announced today that the referendum sponsored by opponents of California’s single-use bag ban has qualified, which will put implementation of the bag law, SB 270, on hold. Voters will now decide whether or not the ban lives in the November 2016 election.

The plastic bag industry, primarily driven by out-of-state support, has sunk over $3.2 million into its campaign to repeal this landmark pollution prevention law. But, Heal the Bay, along with our partners in the California vs. Big Plastic coalition, are not backing down.

Thankfully, voters agree that it’s time to eliminate the single-use bags, which are a powerful symbol of our throw-away consumer culture. A poll by USC Dornslife/Los Angeles Times showed that about six in 10 California voters support the ban, while 34% would vote to overturn the law.

Removal of the plastic bag ban wouldn’t just harm the environment, it would be bad for the economy. California cities and counties spend an estimated $428 million annually to clean up litter and prevent plastic pollution. Flimsy, discarded bags are a blight to our communities, and harmful to aquatic life, like sea turtles and birds.

So what does this mean for shoppers throughout California? The 138 local plastic bag bans that were enacted prior to passage of the state law will remain in place, in areas like the city and county of Los Angeles, Santa Monica, and Long Beach. Referendum qualification will freeze implementation of SB 270, as originally scheduled, so retailers in communities without plastic bag bans may continue to distribute free plastic bags.

But, nothing is keeping individual municipalities from acting against the plastic sack scourge. Right now, nearly one in three Californians live in a municipality that has banned bags. Since implementation of the statewide law is on hold, members of California vs. Big Plastic will continue to advocate for the adoption of local bans.

It’s troubling to think that out-of-state plastic corporations can buy their way onto the ballot. Let’s stand up and show them we are proud to move past costly and polluting plastic bags.

Our science and policy team will continue to work with our partners to help uphold the ban. We’ll keep you posted on ways you can help in the months to come.

We always get questions about plastic bags. We recently assembled an FAQ that details many of the myths and facts about the mysterious bag. 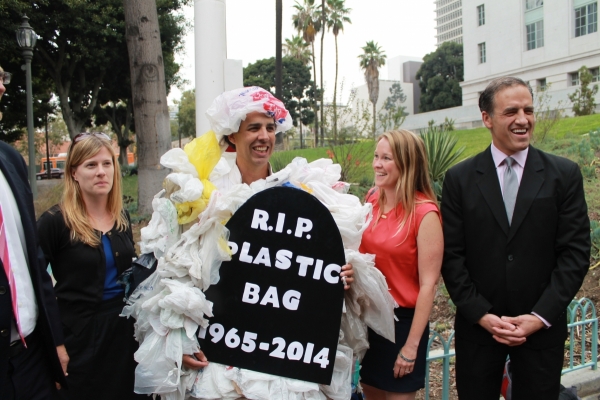 The Plastic Bag Monster has won a brief reprieve. But his days are numbered ….

← Staying Safe at the Beach