Swimming with Sharks: My Encounter with a Great White

But last weekend, I witnessed something in Santa Monica Bay that I’ll always remember.

My friend Geoff and I were in our customary Saturday morning surf spot, about 50 yards offshore in front of the smokestacks at the El Segundo/Manhattan Beach border. On flat days we spend a lot of time mindlessly bobbing, scanning the horizon for any kind of bump that might signal an oncoming wave. As we sat on our boards and stared out at the nearby oil tankers, a sinewy mass of flesh suddenly shot up from the sea, twisting and glistening in the early morning sun. It was like a mini torpedo launched from the depths, spiraling through the ocean surface. Straining briefly for the sky, the fish fell back to the sea with an alarming splash.

A 4-to-5-foot juvenile white shark had just breached a mere 20 feet away from us.

Stunned, we both gave each other one of those “Did-you-just-see-what-I-just-think-I-saw?” looks. We compared mental notes – the shape of the shark, the coloring, the size, the fins, the structure of the still-developing jaws. We knew we had indeed just seen the stuff of myths – a white shark in the wild.

I’m accustomed to seeing other kinds of small sharks at this spot. Connecting rides to the inside, I’ve had to dodge leopard sharks skittering in the clear, warm shallows south of the jetty. Looking for sand crabs, their mouths the size of a quarter, these sharks are completely harmless. But I still get the willies when my feet accidentally bump against their wriggly, squishy bodies.

But white sharks – no matter their size – are a different kettle of fish. When I tell friends about the sighting, many wonder why I didn’t get out of the water immediately. Seeing the pup, my mind and heart raced, but I had surprisingly little fear.

After all, I had heard reports on the news and from fellow surfers about shark sightings this summer in Santa Monica Bay. No one seemed that alarmed. (For a humorous or scary read, depending on your point of view, check out recent citizen-reported shark sightings off our coast on the Shark Research Committee website.) Manhattan Beach and Sunset Point in Pacific Palisades seem to be prime local real estate for the adolescent great whites. My surfboard shaper, Mark Brog, thinks the growing popularity of standup paddleboarding may be a reason for increased sightings the past few years. Circling up and down shorelines, SUPers have an ideal vantage point for spotting sharks.

At this point of their lives, the great whites scour our sandy bottoms in search of the smaller fish that make up their diet. As they grow, the sharks see their appetite switch to larger marine mammals and they migrate up the central and northern coasts, where more seals and sea lions can be found. Some theorize that any circling and jumping done by the juvenile sharks in local waters is their way of practicing for the hunt that will soon dominate their lives, like a puppy playing with a soup bone.

Maybe I’m whistling by the graveyard, but the juvenile sharks I’ve read about – and now seen – don’t seem big enough to pose a real threat to people. The shark we saw was about as wide as my thigh. Nonetheless, as my feet dangled in the water for the rest of the session, I couldn’t help but think that my toes might be tempting to our new friend.

After we got out, Geoff reported the sighting to a nearby lifeguard. I didn’t expect him to close the beach, but he seemed a bit blasé. He and his colleagues had been hearing similar stories for the past two weeks and now believe there are two juveniles patrolling the waters near the jetty. My co-workers were more excited to hear about my encounter, but Peter in our office planted some seeds of doubt by wondering if maybe we had seen a salmon shark instead of a great white. Hey, the two species do look alike, but at the end of the day, a shark’s a shark.

Geoff’s been doing too much reading since our encounter, and now says he won’t get back in the water in Manhattan Beach without a group. He even suggested we abandon our usual spot for a while and head up to County Line the next few weekends. But aggro teenagers aside, who knows what dangers lurk up there?

It’s a blessing to recreate in an ocean teeming with life. This summer, pods of dolphins have been commonplace in Southern California and the once-threatened brown pelicans are out in force. Enormous squid runs have come early and, in a highly unusual phenomenon, giant manta rays play off the coast near Dana Point.

However, great whites face tremendous pressure, despite the recent sightings. Some researchers estimate that there may only be a few hundred adult great whites in the Northeastern Pacific, from the Bering Sea to Baja. Pollution, incidental catch by net trawlers and other stressors may be limiting populations of a critical apex predator. The California Fish and Wildlife Department is now evaluating whether the white shark merits listing under the State Endangered Species Act. Given the importance of Santa Monica Bay to these animals, Heal the Bay’s science and policy team is following the process closely.

Before summer ends, get in the water. You’d be amazed at what you might find.

Got a favorite sea animal? Vote in our Santa Monica Pier Aquarium poll! 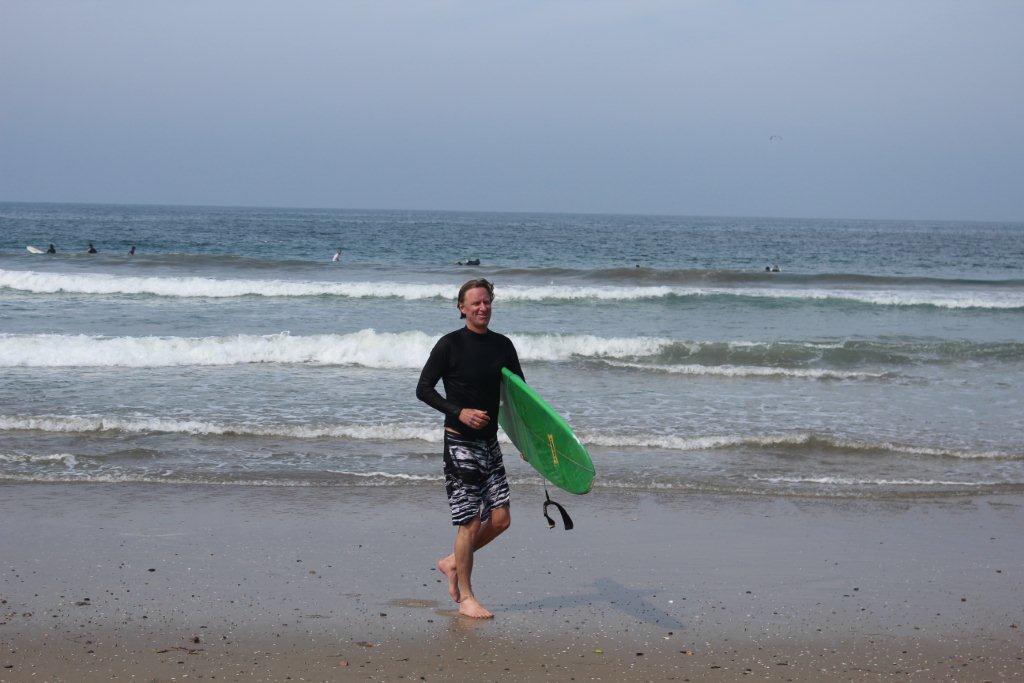 The author, safely on shore

← 10 Things to Know about Heal the Bay's New CEO