Training Day: Learning to Clean Up an Oil Spill

Heal the Bay’s Dana Murray is selected for special training to help clean up spilled oil in Santa Barbara. Here’s her first report:

May 29, 2015 — It’s not every day that you get trained to become a certified oil spill clean-up worker. But that’s what I did yesterday in Santa Barbara. I will return to remove oil from the seashore on Sunday.  About 75 people participated in the four-hour training, which the California Department of Fish and Wildlife (CDFW) conducted.

Many concerned citizens have been clamoring to roll up their sleeves and help with clean-up. But given the safety and health issues involved, it’s a bit more complicated than just showing up on the sand. The volunteer program is tightly managed.

My fellow volunteers ranged in age, hometowns and environmental experience. We got a crash course in the chemistry and physics of the spilled San Ardo crude, which comes from an area north of Paso Robles. We also received a drill-down on proper equipment, clothing, safety procedures and the personal decontamination process. Hazmat suit here I come!

After the training, I spoke with oil spill response coordinators about Heal the Bay partnering with any volunteer cleanup efforts in L.A. (so we are prepped to do that if needed/allowed). After several security checks, I was escorted through the Unified Command Central, which is the nerve center of spill response. The command post is a very impressive operation with hundreds of agency personnel on their computers and phones, studying maps and what-not.

I offered to help transport oiled wildlife down to San Pedro if needed, and the CDFW and Oiled Wildlife Care Network tasked me to transport animals to L.A. for treatment. Unfortunately, private security was so tight at Refugio and El Capitan, I wasn’t allowed to drive down to the beaches to do the wildlife pickup — even with permission from state agencies. No volunteers were being allowed any access yesterday, only staff with badges. Pretty frustrating.

Instead, I did a little reconnaissance of cleanup operations along the coast. Beach access points are all closed and privately guarded from Sands Beach/Isla Vista to north of Refugio. From afar I could see oil in the ocean, on the rocks, and a handful of boats and booms trying to skim the water. My day done, it was time to head back to the office in Santa Monica.

I’ll be back to help clean up in earnest on Sunday. I will report back soon. 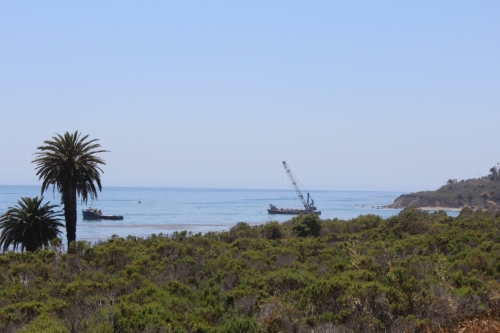 A 30th Gala to Remember: What You Missed →

A Letter from our CEO

“This has been a year of hardship and heartbreak. Many people are lamenting its losses and eager to get out of 2020 and into the new year. I have felt the deep pain of the pandemic, the wildfires, and the unpredictable politics of this unprecedented year. But I am seeing something else too: I see progress. I see change. I see a new future ahead of us…”