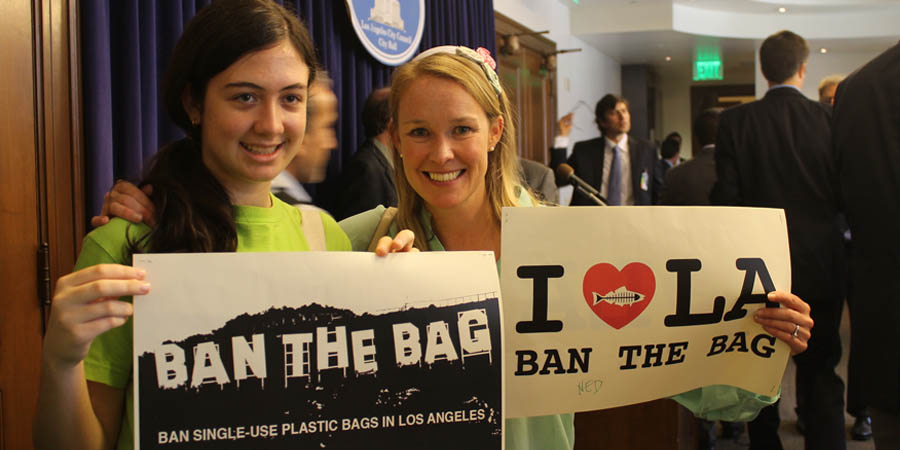 Mentoring is a powerful thing. Here we catch up with our former teen advocate Zola Berger-Schmitz, left, who has blossomed into a Georgia eco-warrior.

Heal the Bay is thrilled that our own volunteer and super healer, Zola Berger-Schmitz, will be honored this week at the influential 2017 Women in Green Forum with the Youth Trailblazer Award.

Zola came to us as a 12-year-old on a mission – she wanted to be involved directly in Heal the Bay’s work to make our oceans more vibrant and full of life. Instead of just coming out to a beach clean-up here and there, Zola dug in deep, got her friends and family involved, and even took her spring break to attend a Fish and Game Commission hearing and testify before the agency, requesting that Marine Protected Areas be established in L.A.

As her passion for environmental advocacy grew, Zola became involved in Heal the Bay’s efforts to prevent plastic pollution and build a youth brigade of high school clubs. Zola is now a junior at Emory University, where she is co-president of the Emory Climate Organization, an intern for the Atlanta Mayor’s Office of Sustainability, an intern with U.S. Sen. Kamala Harris and served as a youth delegate at the United Nations 2016 Climate Talks. As the premier venue to promote women’s leadership in sustainability in California and beyond, it is fitting that Zola is being honored at the Women in Green Forum this year.

Sarah Sikich: What sparked your interest in ocean conservation and environmental activism at such a young age?

Zola Berger-Schmitz: Shortly before I turned 12, my grandparents enrolled me in an oceanography camp at Scripps Institute of Oceanography in San Diego. I had always been interested in reading about marine life, but I hadn’t had much exposure to oceanographic research or to the field of marine biology as a whole.  What I learned at the camp absolutely blew my mind. I remember being fascinated by the notion that plankton could be bioluminescent, and enamored with the NOAA submersibles we toured that were used to conduct deep-sea research expeditions. That same summer, I had a sudden epiphany: “What if there were no more fish left in the ocean?” Later that year, I decided to visit Heal the Bay to learn more about ocean conservation and found out about a campaign you were working on to help adopt Marine Protected Areas (MPAs) along the Southern California coast. I was pretty shocked to discover that although we had national parks like Yosemite on land, there were no state parks underwater. At that moment, I knew that I had to do something to help, especially if I wanted to ensure that my children and grandchildren would still be able to see fish in the ocean one day.

SS: You’ve been involved in many campaigns and projects with Heal the Bay over the years. What was the most influential for you?

ZBS: The first campaign I worked on with Heal the Bay, the campaign to adopt Marine Protected Areas along the Southern California Coast, was probably also the most influential. I hadn’t had any experience with legislative advocacy and I had no idea how to get up in front of a group of stakeholders and give convincing testimony. Soon, several Heal the Bay staff members began mentoring me and through watching them in action, I learned how to write speeches that appealed not only to fellow environmental activists, but also to politicians who were more skeptical about the need to adopt MPAs. A few months later, you helped inspire me to produce a film with my entire middle school that focused on the importance of preserving the ocean for future generations. By the end of the campaign, I had grown from a shy 12-year-old into a poised teenager who felt prepared to present a film in front of the California Fish and Game Commission. When it was announced that Marine Protected Areas had been adopted along the Southern California coast, I was ecstatic and it was the first time that it fully occurred to me that anyone, myself included, could help have an impact on the public policy process. 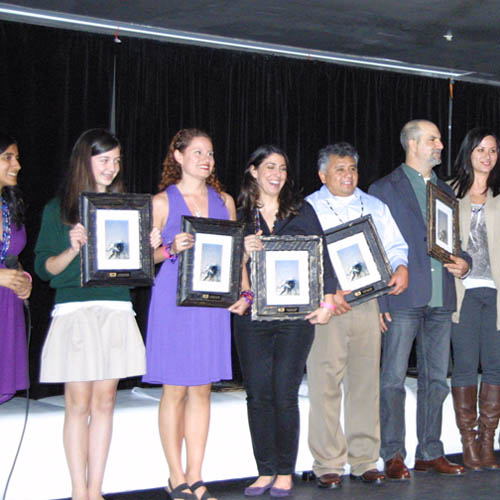 Zola, second from the left, at our 2010 volunteer party.

SS: What has been the biggest challenge you’ve faced in your environmental activism career thus far?

ZBS: When I was in my first year of college at Emory University, I decided to testify in front of the Georgia Public Service Commission in order to advocate for more renewable energy options in the Georgia Integrated Resource Plan prepared by Georgia Power. This IRP determines in large part what the Georgia energy landscape will look like over three year periods of time. Before the hearing, I was told that it would be unwise to use the term climate change when giving my testimony, because it could alienate climate-skeptic politicians. Instead, I had to learn how to make economic arguments about renewable energy and how to approach energy savings from the perspective of a cost-benefit analysis. It was quite frustrating at first to give a public testimony without including information about climate change and coal emissions. Over time, however, I learned how to adapt quickly to my environment, and I have become much better at gauging how to best appeal to different kinds of audiences.

SS: What is something you’ve learned during your time working with Heal the Bay that you will take with you for the rest of your life?

ZBS: One of most important things I learned at Heal the Bay is that you don’t have to be a scientist, politician, or policy expert to have an influence on public policy and to affect environmental change. You can be a middle-school student or even an elementary-school teacher. A lot of people are too intimidated to speak up for what they believe in because they are afraid that they will come across as inarticulate and uninformed. When I first got involved in environmental activism, I was in a similar boat. I didn’t have that much knowledge about the nuances of environmental legislation and knew very little about the science behind phenomena such as overfishing and sea-level rise.  What I did have, however, was the passion to make a difference. In college, a lot of my peers are surprised that I have the courage to testify in front of politicians or approach delegates at the United Nations Climate Talks. This is largely because Heal the Bay gave me the confidence to put myself out there, even in tough situations.

SS: How do you stay motivated in a field that’s faced with so many competing interests and obstacles?

ZBS: I always remind myself that change doesn’t happen overnight. Some of the most successful campaigns that I was involved in during my time at Heal the Bay, such as the campaign to ban plastic bags in the City of Los Angeles, were campaigns that took over 15 years to effectively implement. Persistence is key to staying motivated, even when things don’t look like they are going to work out. Often times, the most satisfying victories are the victories that were the hardest to achieve.

SS: What advice do you have for young women who are interested in pursuing a career in environmental conservation?

ZBS: I have a few really simple pieces of advice. First of all, try to find a mentor. It can feel daunting to think about pursuing a career in a field like environmental conservation, and it really helps to talk to someone who has already gone through some of the same hoops. Sarah, you are one of my biggest mentors at Heal the Bay and have continued to serve as an inspiration to me in college and beyond. Secondly, get as much practical experience as you can early on. The only way to learn about environmental activism is to participate in it directly, whether that means speaking at public hearings, starting an environmental club at your school, or simply signing up for a carbon footprint reduction challenge. The more and more opportunities you take advantage of, the more you learn about yourself as well as your strengths and weaknesses. And lastly, just go for it! You don’t need to be a seasoned environmental activist to have an opinion that matters.

Make it a Strawless Summer All Year →

While we may be physically distant at this time due to the COVID-19 Response, we want to stay connected with you. Follow @healthebay on social media for the latest news and resources.

Read our new blog posts to stay up to date on the latest environmental and public health issues.

Tune in to Heal the Bay Aquarium for Facebook Live videos.

Sign our petition to prevent federal EPA rollbacks from threatening environmental and public health in California.

Donate to Heal the Bay and support The Power of Water.