Answers to Questions About Possible Fukushima Radiation in California

Heal the Bay has received many questions from concerned residents in Southern California about potential health and environmental impacts along the California coast that may result from the Fukushima nuclear power plant disaster in Japan. Here is our perspective about possible radiation dangers, gleaned by consulting the scientific community:

What is the source of potential radiation?

On March 11, 2011, a massive 9.0 earthquake off the coast of Japan triggered a series of tsunami waves that crippled the Fukushima Daiichi Nuclear Power Plant located in Okuma, Fukushima. The emergency generators designed to cool the six onsite reactors and prevent nuclear meltdown were severely damaged during the disaster.

For the past two and a half years, the Tokyo Electric Power Company (Tepco) has been trying to cool the three reactors impacted by the tsunami. Japanese workers are constantly flushing the failing reactors with water and storing this now radioactive water onsite. Many of these onsite storage tanks have documented leaks; Tepco officials reported this month that as much as 300 metric tons of radioactive water is reaching Japanese waters through surface and subsurface flows on a daily basis. In addition to storage tank problems, groundwater contamination from building damage is predicted to reach the Pacific in the near future. The Japanese government has recently taken control of the cleanup, with a promise to stop groundwater from seeping into contaminated plants by sealing it off via a miles-long subterranean wall.

What are the concerns of some California residents?

Media reports have some people worried that a giant plume of radiated water will soon make its way to the California shoreline, exposing swimmers to radioactive water. Others are nervous that local diners might become contaminated by consuming imported fish caught off the Japanese coast. Some wonder if migratory predator fish will make their way from polluted waters in Japan and be caught in local waters, eventually winding up in the regional food supply chain.

Are those fears founded? Is it safe to swim in Southern California?

In terms of human health, the latest academic findings suggest that swimmers off the West Coast of North America face no radiation risks by entering the water. Radioactive concentrations harmful to humans quickly drop below World Health Organizations safety levels as soon as they leave Japanese waters, according to Dr. Erik Van Sebille, a physical oceanographer at the University of New South Wales. Open ocean currents, due to their strength and size, will dilute radioactive concentrations within four months of their release from Japan. Sebille and colleagues also conclude that It is estimated that radioactive material will take three years to travel from Japan to coastal areas along the eastern Pacific (United States, Canada, Mexico).

The bottom line, according to researchers: It is currently safe to swim along our local beaches. Experts also believe that beachgoers will not need to worry about radioactive contamination from the disaster in the future, due to dispersion currents in the open ocean.

Are fish that I get at the store or a local restaurant safe to eat?

It is important to understand the origin of the fish you consume. Much of the fishing that took place in and around Fukushima has stopped since the disaster. Even so, a recent study from the Woods Hole Institute found that the majority of marine species found in and around the Fukushima area do not contain radiation concentrations harmful for human consumption. But avoiding fish species caught in Japanese waters may be a good idea for those that have heightened concerns. We suggest that if you are worried about eating fish with elevated radioactivity, you should avoid fish coming from Japan. Fish caught off our local coastal waters as well as our northern and southern borders are safe to eat. Open ocean currents disperse radiation throughout the Pacific and will not impact local, non-migratory fish stocks. The Food and Drug Administration (FDA) is currently screening all imported goods from Japan for radiation and does not anticipate any public health effect on seafood safety.

Are fish species found in the Pacific Ocean now radioactive?

At the moment, it is difficult to make scientific conclusions about the radioactivity of fish in the Pacific. Large predatory species, such as Bluefin Tuna, and bottom-dwelling species can bioaccumulate contaminants more readily and may be more prone to having higher concentrations of radiation in their bodies when compared to other species. Also, fish species may test positive for radiation from sources other than Fukushima (e.g. nuclear weapons testing in the 1950s). Additionally, the Woods Hole study found that radioactive contamination levels have not declined in fish following the initial radiation release at Fukushima, suggesting radiation is still present near the disaster site.

Is it safe to pick up trash found on the beach? Could this trash have washed up from the Japanese tsunami?

Yes, trash on the beach is safe, according to federal officials. According to National Oceanic and Atmospheric Administration, the relatively few items of debris originating from the tsunami found on shorelines along the U.S. West Coast have been tested for radiation, and no contamination was found. Heal the Bay is involved with NOAA’s Marine Debris Monitoring Program, where we monitor areas in Southern California for marine debris accumulation along our coast, as well as scout for debris that may be from the Fukushima disaster. Since we began the program in 2012, we have not found any debris on our local beaches originating from the disaster. If you believe that marine debris has washed up on one of our local beaches from the Fukushima event, proceed with caution and contact DisasterDebris@noaa.gov. NOAA states that marine debris from the tsunami is unlikely to hold harmful levels of radiation and should not be of public concern.

Who is monitoring for radiation issues associated with the Fukushima disaster in the U.S.?

Three major federal agencies are currently monitoring the radiation from the Fukushima disaster: NOAA, the Food and Drug Administration and the Environmental Protection Agency. NOAA monitors marine debris and atmospheric dispersion of radioactive particles; the FDA tracks Japanese imports to insure food safety; while the EPA monitors air and water for radiation that is harmful to human health.

How can I stay updated on the latest developments?

Heal the Bay is keeping up to date on the most recent news and scientific studies on the Fukushima disaster in order to inform the public and best protect our coastal waters. We will provide updates on our website and social media channels (Facebook and Twitter) on the issue as more information becomes available.

Read Heal the Bay’s recommendations on how to stay healthy while swimming or fishing in Santa Monica Bay. 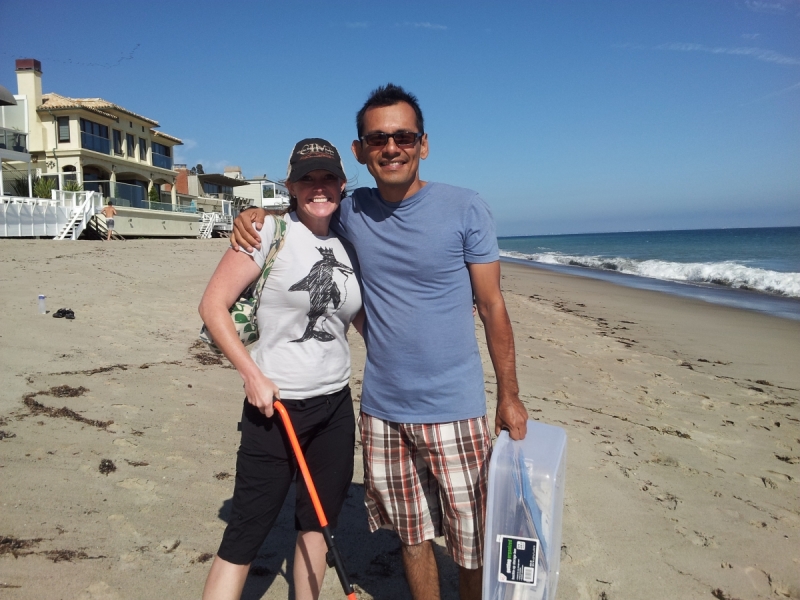 Heal the Bay staff monitoring for tsunami debris along our local beaches.

10 Things to Know about Heal the Bay's New CEO →