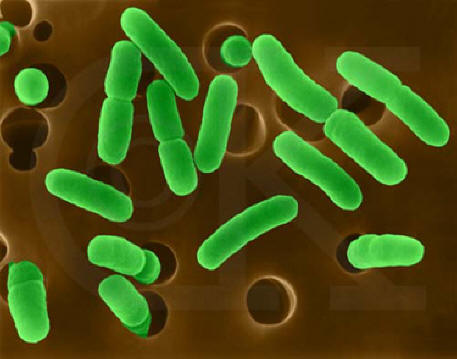 Staff scientist Ryan Searcy takes a closer look into the state’s decision not to drop fecal coliform regulations at California beaches. It’s an important example of our advocacy at work, and how collaboration with regulatory agencies can lead to better environmental policies.

Advocating for sound, science-based environmental policies is often both frustrating and rewarding. In California, we advocates are lucky that regulators generally share a similar goal of achieving a safe, healthy, and clean environment. However, we often find ourselves at disagreement on how to achieve that goal. In the end, when regulatory officials change policies or adopt a new regulation, our hope is that the best science guides the process. All relevant stakeholders should have their say, so that the policy or regulation serves the public and the environment to the highest benefit.

At the end of August we saw one example of this as the State Water Resources Control Board approved updates to the beach water quality standards provided in the California Ocean Plan. While it is true that Heal the Bay does not agree with all of the changes the State made to these standards, we want to particularly highlight a major success: that in the 11th hour, the State, along with Heal the Bay and other stakeholders, worked together to rewrite the standards to be more health protective by retaining fecal coliform. 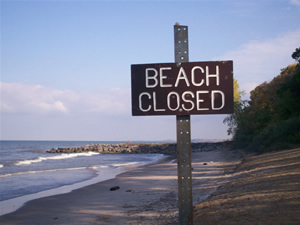 In any given sample of ocean water, you are likely to find a veritable zoo of algae, bacteria, viruses, parasites, and other organisms. Fecal coliform, along with total coliform and Enterococcus, are the three primary fecal indicator bacteria (FIB) monitored and regulated at California ocean beaches to help us determine if it’s safe to swim. FIB in the water do not necessarily get you sick themselves, but presence of these organisms may also indicate the presence of the organisms that do get you sick, such as Salmonella, Campylobacter, and Norovirus. Swimming in water with high levels of FIB is correlated with an increased risk of skin rash, eye and ear infections, and gastroenteritis. Because of this, the State protects beachgoers by setting and enforcing water quality standards for FIB.

Last year, the State began the process of updating the water quality standards in the Ocean Plan, something that hadn’t been done since the 1980s. Initially, both total coliform and fecal coliform were dropped from the ocean regulatory standards, while standards for Enterococcus only were retained. To support this decision, the State initially cited the EPA’s 2012 meta-analysis of 27 epidemiological studies that concluded, among other findings, that Enterococcus alone was the best predictor of illness from a day at the beach. However, EPA’s analysis is not the most recent nor relevant science on water quality at California beaches. Only two of those 27 studies were performed in marine waters in the United States, and only one was performed in California; both were completed before the year 2000.

Additional to its known correlation to health risk, fecal coliform levels have often exceeded California standards, even at times when Enterococcus does not. Heal the Bay maintains a large database of FIB samples taken by California beach agencies, and these data fuel our Beach Report Card and NowCast programs. Our analysis of over 328,000 historical FIB samples taken at over 700 sites in the summer seasons from 1998 through 2017 showed that nearly 23,000 (7%) of those samples exceeded state standards for at least one FIB. Of those exceedances, nearly 3 out of every 4 days in which a health standard was exceeded at a California beach, Enterococcus was partially or fully to blame. So Enterococcus is undeniably an important indicator at ocean beaches. 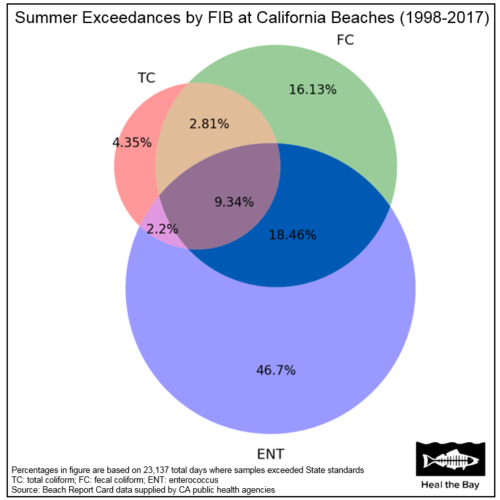 However, the remaining measured exceedances were not due to Enterococcus. Fecal coliform exceeded California standards alone (that is, when total coliform and Enterococcus did not) in more than 16% of all recorded exceedances, an amount that Heal the Bay argues is significant when considered with its known correlation to health risk. Looking deeper into the data, we saw that fecal coliform was the FIB in highest exceedance at a number of well-known beaches. Troubled beaches like Cowell Beach, Pismo Beach Pier, Santa Monica Pier, and La Jolla Cove (among others) may not have been prioritized for getting cleaned up if fecal coliform were dropped from regulation.

The State was set to adopt the revisions to the Ocean Plan, including the amendment that dropped fecal coliform standards from the regulations, at a public hearing in February of this year. Days before the adoption hearing, the lack of consideration of the relevant California science and the historical FIB data mentioned above were brought to the State’s attention, and the hearing was postponed in order to consider fecal coliform standards further.

After a meeting in the spring with a stakeholder group composed of Heal the Bay scientists; expert water quality scientists from Stanford, UCLA (including our former chief Mark Gold), and SCCWRP ; the California Coast Keeper Alliance; and representatives from some of the Regional Water Boards, the State went back and evaluated the relevant California-based science and the historical FIB sample data from California beaches, using them as evidence to rewrite the standards to retain fecal coliform. When the amendments to the water quality standards in the California Ocean Plan were finally adopted last month, the existing fecal coliform standards were retained, and the state agreed to continue to consider the relevant science and data in future updates of the Ocean Plan.

The clawback marked a huge win for California beaches and the people who visit them.

It was also a good example of a regulatory process that involves consideration of sound science and collaboration between a regulatory agency and its stakeholders. The task is not done, though. Heal the Bay looks forward to continuing the conversation with the State Water Board and other stakeholders as we continue to work towards water quality regulations that ensure our beaches are all available for Californians to safely enjoy.

You can read the State Water Board staff report that documents their full analysis here, starting on page 62.

Protecting What We Love – Sharks in Santa Monica Bay →