Sept. 17, 2016 — There are 8 million stories in the trashy city on Coastal Cleanup Day. Here is one of them from Heal the Bay’s communications director, Matthew King.

Heading down PCH to infamous Lunada Bay this morning, I really didn’t know what to expect.

To Southern California surfers, this idyllic cove in Palos Verdes Estates is infamous for being home to the Bay Boys, a group of largely middle-aged locals accused of using vigilante-like tactics to scare away visitors. These self-appointed regulators sit on the bluffs and regularly block access to the beach, according to a recently filed federal class-action lawsuit, all in the name of keeping some of L.A.’s best waves to themselves.

After years of hosting cleanups up and down the Palos Verdes Estates, Heal the Bay decided to host a site at Lunada Bay in concert with city staff for this year’s Coastal Cleanup Day. Leading up to the cleanup, I hadn’t given the site much thought. Then I received a few media enquiries asking about the Bay Boys and if we expected any trouble or were taking any safety precautions.

It all seemed a bit alarmist to me. But I do have some family history at Lunada Bay that gave me some pause. Last fall, my high school son and his friends – unbeknownst to me – decided to hike down to the cove to watch the sunset. They came back to find the tires slashed on their car.

Channeling the sage words of my colleague Meredith McCarthy, I assured the journalists that cleanups tend to bring out the best in people. We didn’t expect any trouble, I said (and hoped).

As usual, Meredith was right. 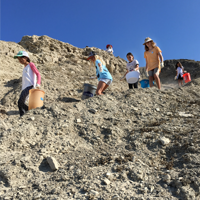 I spent a beautiful morning with about two dozen volunteers at Lunada. The only intimidation I felt this day was figuring out how to navigate the twisting, semi-treacherous path to the beach without falling on my butt. And the only locals I crossed paths with were an adorable group of girls volunteering from Lunada Bay Elementary School across the street. They weren’t too menacing.

The rocky shoreline is thankfully free of the micro-trash that plagues most Southland beaches: cigarette butts and whatnot. The biggest haul came from beer cans and plastic water bottles chucked carelessly from the bluffs. An intrepid group of Palos Verdes High students scurried up the cliffs like billy goats to retrieve trash, while their proud mothers beamed on the beach. The group was part of the Los Hermanos Black club, which organizes volunteer opportunities for mothers and their teen-aged sons.

Including the Lunada volunteers, the Cleanup Day crew in L.A. County totaled 9,556 people at 48 inland and coastal sites. Participants hauled in 29,635 pounds of ocean-bound debris. This year’s group collected nearly 30% more trash in L.A. County than last year’s volunteers. (You can view that as either a positive or negative, I suppose!) Among the items found: a switchblade knife, a flight-deck crew vest from an aircraft carrier, two old TVs, three syringes, nine shopping carts and one human-sized teddy bear on the sands of Long Beach.

On my way home, I detoured to another one of my favorite sites — Compton Creek, a largely forgotten gem in the necklace of green spaces along the L.A. River.

This tributary is one of the few soft-bottomed portions of the largely channelized L.A. River. A half-mile stretch of lush vegetation sits hard against the Crystal Hotel and Casino, surrounded by concrete and the 91 Freeway. The creek is choked with trash and polluted runoff fouls its waters, but life miraculously thrives here. Turtles scour the muddy bottom, while herons alight in the brush, looking for tiny morsels.

Nearly 100 volunteers donned gloves and trudged through the boggy waters, hauling out a depressing mix of fast-food wrappers, plastic bags and food packaging. To be honest, if I were a volunteer I would view collecting all that trash as a Sisyphean task. I’d wonder if I had made a dent. We could’ve sent 1,000 people to that spot today and we still wouldn’t have been able to remove all the annoying bits of chip bags and Styrofoam containers ground into the creek bank.

Yet participants remain so optimistic. A Filipino service fraternity called Alpha Phi Omega sent a squadron of volunteers to Compton this morning. One gentlemen, with a full bag of trash, smiled broadly as I approached him. Seeing my Heal the Bay T-shirt, he thanked me.

After participating in dozens of cleanups in my tenure here, it’s easy to get blasé sometimes. I wonder what in the world motivates people to get up on their Saturday off and pick up trash for nothing. I know we absolutely cannot function without our volunteers, but his smile reminded me that we give as much as we get by organizing Coastal Cleanup Day. Volunteers leave feeling hopeful, feeling good about themselves and their communities.

Check out the photos of Coastal Cleanup Day sites all over L.A. on our Flickr album.