Sept. 30, 2016 — This Saturday, October 1, marks the opening weekend of the recreational lobster fishing season in California, officially beginning at 12:01 a.m. This is one of the busiest weekends on the water in Southern California, and it’s important that people stay safe and know the rules. So, here’s Heal the Bay’s cheat sheet to the recreational lobster regulations.

On the resource side, the state Department of Fish and Wildlife recently adopted California’s spiny lobster fishery management plan (FMP) to ensure that the fishery is sustainable for both the commercial and recreational sectors, while keeping the Southern California lobster population healthy and thriving. New regulations associated with the FMP won’t take effect until next year’s 2017/2018 lobster season. Heal the Bay participated as the environmental stakeholder on the advisory committee for the management plan.

Spiny lobster play an important role in our kelp forest and rocky reef systems, keeping things balanced by feeding on sea urchins, mussels, and other invertebrates. And, it’s not just people that enjoy rich, sweet taste of lobster, California sheephead, cabezon, horn sharks, and other animals also eat lobster. The good news is that lobster populations are generally doing pretty well in Southern California, especially with the implementation of marine protected areas in 2012.

Because lobster are most active at night, recreational fishing also largely occurs in the dark. Conflicts between boats, divers, and hoop-netters are not uncommon during opening weekend. Here are a few tips to stay safe while lobster fishing, especially during the busy opening weekend:

And, here’s a recap of the CA Department of Fish and Wildlife’s (CDFW) recreational lobster fishing regulations. Check the DFW website or sport-fishing guide for detailed regulations:

Both commercial and recreational fishing are part of California’s coastal culture. And, charismatic lobster are also a favorite species to spot for non-consumptive divers, making great photo subjects as well. Be safe and have fun this lobster season!

More information is available on the Department of Fish and Wildlife website and through this tip-card. 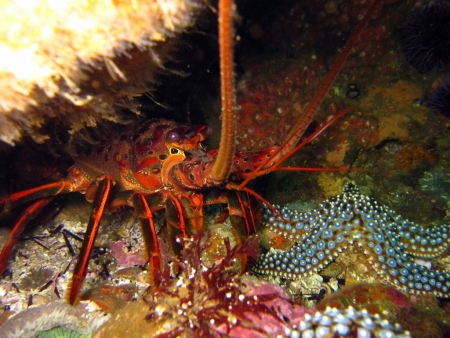 Spiny lobsters are most active night, posing some challenges for divers.

Heal the Bay Honors the Ocean With the Chumash →