After 11 years at Heal the Bay, Communications Director Matthew King is hanging up his keyboard. Before he heads off for a career sabbatical, he’ll offer a series of posts this week about his favorite moments and lessons learned.

Being the Communications Director for Heal the Bay is one of the easiest jobs in L.A. Our little nonprofit has brand-recognition and favorability ratings that would be the envy of any Fortune 500 company. We don’t have to spam people. Angelenos want to hear from our scientists and educators. I’ve tried to keep it pretty simple. People love the beach. Heal the Bay protects the beach. Therefore, if you love the beach, you should love Heal the Bay. It’s like that theorem in Geometry – A=B, B=C, so A=C.

Dorothy Green, Heal the Bay’s inspirational founding president, also kept things simple. She was a master communicator, who rightly noted: “Educating the populace is critically important. If politicians are going to lead, they need to already have an army of people in front of them in order to lead it.”

She shrewdly engaged media and local ad agencies to help spread the word in Heal the Bay’s first fight  in 1985 — stopping the Hyperion Plant from dumping partially treated sewage into the Bay. I’ve followed that blueprint during my tenure, helping secure some important victories. I’ve come to realize that as dysfunctional as government can be, it’s the key variable in a winning formula for healing the Bay. Cleanups are great, but it’s the heavy arm of the law that’s going to result in meaningful change – be it bans on single-use plastics, stiff fines for chronic polluters or injunctions against offshore drilling. My job has simply been to help recruit and mobilize the army that Dorothy envisioned.

So without further ado, here are my three favorite campaigns that I worked on here.

As we successfully fought for the statewide ban in 2016, I constantly got asked: “Don’t we have bigger things to worry about than plastic bags?” The short answer is “Yes.” But these urban tumbleweeds are a powerful symbol of our throwaway culture. Getting people to give up the “convenience” of plastic bags can act as a gateway drug, where they feel good about other new habits — be it eating less meat or taking public transit. With nearly 2 million YouTube views, our tongue-in-cheek, BBC-style nature mockumentary “The Majestic Plastic Bag” made people laugh and think. The Jeremy Irons-narrated film even made the rounds in the legislative offices in Sacramento, as well as running in official competition at Sundance Film Festival. I still get dozens of requests each year for permission to play the film in festivals and school districts around the world. Many marketers talk a big game about their campaign going viral only to see it fizzle. But it’s the greatest rush when your work actually does.

When I first heard about the prospect of Hermosa Beach allowing an energy company to drill underneath the ocean floor there, I thought it must be some kind of mistake. But a regulatory loophole and an odd legal settlement basically opened up a narrow window for voters to decide in 2015 if they would allow limited drilling in exchange for millions of dollars in “community benefits.” Knowing how trusted Heal the Bay is in the South Bay, some local business owners raised some funds for our organization and Surfrider Foundation to create a public awareness campaign to defeat the measure. We were outspent 10-to-1 by Big Oil but our community coalition – led adeptly by Keep Hermosa Hermosa and my former colleague Jose Bacallao – prevailed. We had a lot of fun with the creative campaign, which focused on the idea that “Big Oil is Slick. Don’t Trust It.” My former Comm colleague Nick Colin came up with a disruptive idea – the Spillage People, a singing/dancing crew of our staffers dressed in HazMat suits drenched in oil. Riffing off the Village People hit “YMCA,” these merry band of pranksters would flash-mob around town and sing an anti-drilling ditty to hoots and hollers. Simply brilliant. 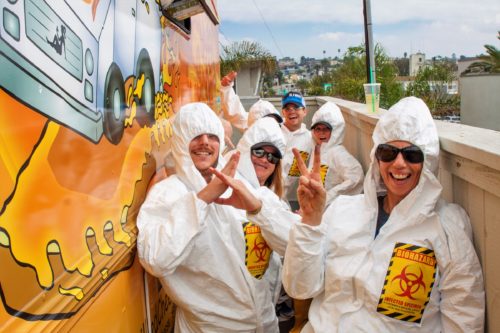 For the general public, thinking about water infrastructure is as exciting as talking about retirement planning. But last fall, we were handed a rare chance to start replacing our outdated water thinking/infrastructure with L.A. County’s Measure W. The initiative called for property owners to tax themselves to the tune of $200 million a year to start building a lattice of stormwater parks throughout L.A. that will capture and reuse stormwater and other runoff instead of sending it uselessly to the sea.  It was a VERY heavy lift. Who wants more taxes? And who in the general public really thinks or cares that much about where their water comes from? All the polling suggested the measure was truly a 50-50 tossup. It could go either way. But this one measure marked the single biggest action to decrease pollution in the Bay in the past decade. Thankfully,  president Shelley Luce committed the funds to come up with a creative campaign to try to win hearts and minds in the last few days leading up to the election. My longtime volunteer creative partner – Kevin McCarthy, an avid surfer and recovering ad exec – came up with the idea to turn the L.A. River into a canvass in support of Measure W. Heal the Bay and LA Waterkeeper snuck a crew onto the banks before sunrise and spelled out SAVE THE RAIN, SAVE L.A. in enormous chunks of sod along its cement channels. Green graffiti on concrete banks — the medium was the message! Local news trucks broadcast our stunt live and social influencers from Julia Louis Dreyfus to Zooey Deschanel shared our video far and wide. We can’t take all the credit, but I’m sure our stunt drove support for the measure, which squeaked by with the tiniest of margins.

Next: Three of my favorite “small moments” at HTB