Deconstructing the Sewage Spill in the L.A. River

July 22, 2016 — Science and policy director Rita Kampalath gets to the bottom of the massive sewage spill that made a mess of the L.A. River.

Perfect blue sky, 95 degrees outside … and the beaches are closed??

After years of hard work, Heal the Bay is thankful that the days of sewage fouling our waterways are largely behind us. But we got a bad flashback to the old days this week when an estimated 1.75 million gallons of raw sewage spilled into the L.A. River late Monday and early Tuesday. The spill itself was estimated at 2.5 million gallons, roughly 800,000 gallons of which were captured before they reached the river. A rupture in an aging sewer pipe in the Boyle Heights area had been identified as the likely culprit.

We’ve heard a lot about our nation’s crumbling infrastructure, and L.A. isn’t immune to these issues. But the City of Los Angeles’ decision to invest in sewer upgrades over the past few years has largely paid off.

An estimated investment of $200M per year has resulted in an 85% reduction of sanitary sewer overflows (i.e., sewage spills) since 2000. But when popular shorelines in Long Beach and Seal Beach are closed for days because of a spill, you know a major amount of waste must have been discharged and something had seriously gone wrong.

I wanted to find out more about what could have caused such a catastrophic failure of a major sewer line and what was being done to fix it. So Thursday morning, the City of L.A. Bureau of Sanitation staff graciously offered to give me an up-close-and-personal view of the rupture area. 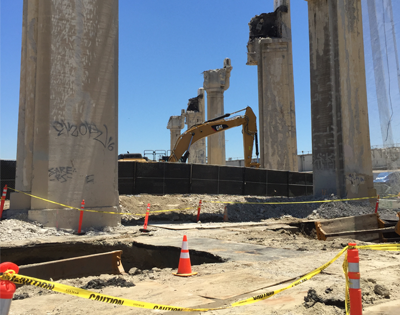 We pulled up to the site, located where active construction is already going on – the highly publicized demolition of the 6th Street Bridge in Boyle Heights. The immediate rupture area was now cleared of the heavy machinery ever-present during the months-long razing of the iconic bridge, but I could still hear demolition crews working nearby. I couldn’t help but wonder if all this heavy construction nearby might have played a role in the failure of the sewer line.

As we surveyed the damage, City staff explained that the spill was detected following sinkholes that had recently formed in the road, roughly at the intersection of Mission Road and 6th Street. These collapses and the associated debris ruptured and then clogged the massive 60-inch trunk line known as the North Outfall Sewer (NOS), causing a back-up of waste, which, given the volume flowing through the enormous pipe, quickly and unfortunately made it into the river.

With crews working around the clock, a diversion was ultimately put into place to direct sewage around the damaged pipe. Cleanup quickly commenced and is still ongoing.

In the early days after a troubling incident like this, we have at least as many questions as answers. We are urging the City to continue investigating the causes and impacts of the spill. What conditions underground led to the sinkholes? Did the months of construction and associated heavy machinery and demolition play a role? What safeguards were put into place to protect the relatively shallow sewer lines during the demolition? The top of the NOS is only 16 feet below ground.

What sort of controls will be put into place to avoid future spills along our key waterways? And, who will be held accountable for this spill? It is also a keen reminder that we need to continue to invest in our aging infrastructure to avoid incidents like this in the future.

When our region’s famously perfect weather starts to veer towards scorching, people want to take advantage of another enviable asset – our recreational waters. But they need to know a day at the beach isn’t going to make them sick. 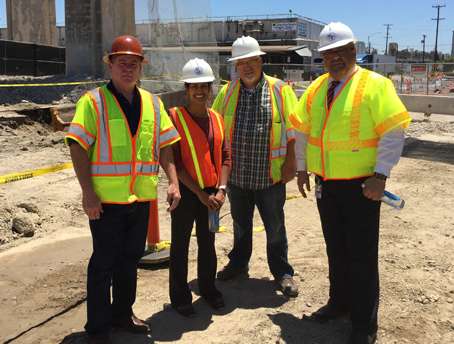 So we commend and thank the authorities in Long Beach and Orange County for making the wise decision to prioritize public health and close the beaches as soon as news of the sewage spill came out. But it’s a shame that on this hot weekend some of our best avenues for relief may be out of commission. As a watchdog of our local waterways, Heal the Bay will continue to track the investigation and follow-up on this massive spill, advocating for appropriate accountability measures and preventative actions to protect our vital rivers and beaches.

Spills are fortunately rare occurrences on the river. But chronic bacterial pollution still plagues some of its popular recreational zones. That’s not good news for the increasing number of people who are now kayaking, swimming and angling in its waters.

My colleague Katherine Pease and her team have been collecting and analyzing water samples along the river for harmful bacteria. Next week she will release the results of her study. Let’s just say that if you care about public health, you will be very interested in its findings. Stay tuned.

The Future of Freshwater

Heal the Bay just introduced NEW freshwater legislation alongside Asm. Bloom! Our goal is to protect public health at popular freshwater recreation areas. Speaking of water, watch our LA River Advocacy Training video on Facebook to learn more about the LA River Master Plan. Sign up for Volunteer Orientation to get involved and stay tuned for our Earth Day announcements coming soon.