Nov. 1, 2014 — After last night’s sporadic but intense rainfall, L.A. beachgoers this morning were treated to some spectacular sights – full, vibrant rainbows arcing to the sea.

Unfortunately, they were also treated to a less uplifting scene – trash-strewn shorelines.

Matthew King, our communications director, took a reconnaissance trip to Santa Monica’s Pico Kenter storm drain this morning near Bay Street. As the pictures below attest, there was no shortage of plastic bags, water bottle, fast food packaging, balloons and bits of Styrofoam to be found after the storm.

Trash and toxins that have been accumulating for months on sidewalks, roadways and riverbeds are being washed into the stormdrains as you read this. Exposure to this runoff can cause a variety of illnesses, most frequently stomach flu.

But not everyone has gotten the message apparently. During Matthew’s visit, two tourists staying at nearby hotels jumped into the ocean directly in front of the flowing Pico Kenter stormdrain. Yuck!

There’s another equally disturbing aspect to the runoff – it’s a huge waste of a precious resource.

Los Angeles imports costly and increasingly scarce water from Northern California and the Colorado River. The region now imports more than 80% of our water, using enormous amounts of energy and capital to do so.

Stormwater — if held, filtered and cleansed naturally in groundwater basins — could provide a safe, more secure and less costly source of drinking water. That 10 billion gallons of water from an average single storm in L.A. could fill nearly 120 Rose Bowls. That would provide enough water for a city the size of Santa Monica for more than three months.

“It’s depressing to see all the waste on our shorelines after First Flush,” said Alix Hobbs, president of Heal the Bay. “But it’s just as depressing to think about all that rainwater we are wasting. In a time of drought, we have to do a better job of using the water we already have.”

Heal the Bay’s science and policy team is now working closely with the city of Los Angeles to develop a funding mechanism to design and build large-scale, multi-benefit stormwater capture facilities.

During the rainy season, Heal the Bay reminds residents that they can take steps in their own home to take pressure off an already taxed stormdrain system. Among them: keeping trash out of gutters and stormdrains, disposing of animal waste and automotive fluids properly, and limiting runoff by curtailing such wasteful practices as hosing driveways and overwatering landscapes. 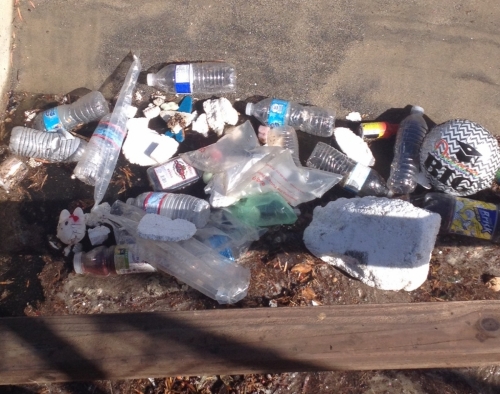 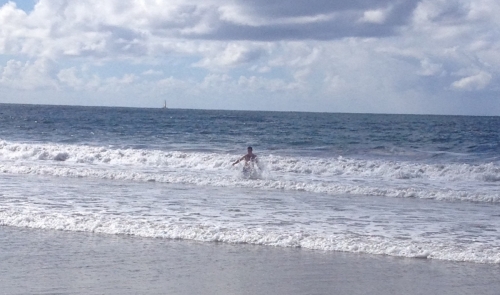 One unknowing or foolhardy swimmer takes a dip right in front of Pico stormdrain.