Hull of a Problem: Copper in Marina del Rey Harbor

Update: After a heated discussion that lasted over four hours, the Regional Water Board unanimously approved the amendments to the Marina del Rey Toxics TMDL at its Feb. 6 meeting that will require boat owners to remove copper-based paints from the hulls of their boats (see below for details). Although many boaters expressed concerns over the potential costs of repainting, Regional Board staff reiterated their intent to help secure some grant support. USEPA and others also discussed studies and research by the Department of Toxics Substance Control and others that identified cost-effective, non-toxic paint alternatives. Heal the Bay looks forward to working with the Regional Water Board, the County and the public to help find a sensible path forward for TMDL implementation.

Marina del Rey attracts hundreds of thousands of visitors each year with its breathtaking views and coastal amenities. Its harbor, the centerpiece of the community, is the largest man-made marina in the United States, with mooring space for more than 6,000 small vessels. It also serves as home to many coastal service industries, such as sport fishing, whale watching, and boat racing.

Before the U.S. Army Corp of Engineers created the Harbor in the 1950s, a vast salt marsh covered the area, providing habitat for many aquatic and terrestrial species. Despite the massive transformation of the area over the past 60 years, it remains home to many species that once occupied the wetland, such as sea lions, pelicans, and gulls.

Despite all this animal and human activity, there’s a reason to be concerned about the health of the Marina. Most visitors don’t know that in 2009 Cal EPA found the Harbor to be the most toxic metropolitan marina in the state. Bottom line: Many aquatic species can’t survive in these polluted waters, which also pose a health hazard to humans who regularly come in contact with the water. 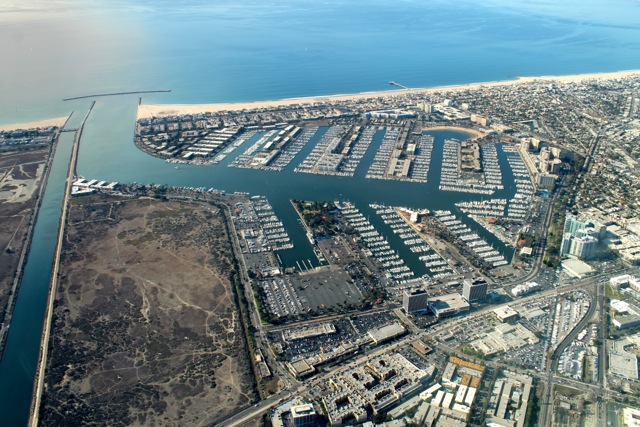 Marina del Rey is now on the Clean Water Act Section 303(d) list of impaired waterbodies for a variety of pollutants (chlordane, copper, lead, zinc, PCBs, DDT, dieldrin and sediment toxicity). Accordingly, many beneficial uses of the Harbor, such as water contact recreation, fishing and marine habitat, are negatively impacted.

In response, the Los Angeles Regional Water Quality Control Board established pollution limits in 2005 for the water body to help clean up the Harbor and protect the many uses of its waters. At its Feb. 6 hearing, the Regional Board will reconsider the pollution limits – also known as a TMDL – in order to incorporate the latest science.

The most controversial element of the proposed revision is a requirement for an 85% reduction in copper loading from boats into the water column. Unfortunately, many of the boats in the harbor have their hulls coated in paints that contain high levels of the metal. The copper is effective in keeping barnacles and other unwanted creatures off hulls, but it also can leach into surrounding waters and be a major contributor to overall toxicity.

The new rules would dictate that 85% of the boats now moored in the Harbor would need to refinish their hulls with an alternative product by March 2024. The San Diego Regional Water Quality Control Board recently adopted a similar requirement to reduce dissolved copper in the water column in the Shelter Island Yacht Basin Copper TMDL.

To help offset the high upfront costs of switching to non-copper based hull coatings, the Regional Board is exploring grant options for boat owners. The San Diego water board has pursued a similar path to help boat owners.

Marina del Rey is an iconic location in Los Angeles. In order to ensure future generations can fully enjoy this important coastal resource, it is critical that water quality is protected. Heal the Bay’s policy team has determined that updating the Marina del Rey Harbor Toxic Pollutants TMDL to address the copper issue will help protect this resource and the marine life that depends on it.

For more information on copper leaching from boat hulls, you can visit:

← High Flying, Adored: MPAs From Above