This fact sheet is presented in partnership with the Surfrider Foundation.

The City of Hermosa Beach has a moratorium in place that prohibits oil drilling. After years of legal battles, a settlement was reached between E&B Natural Resources and the City of Hermosa Beach that could potentially allow the community to be opened up to oil drilling by putting the moratorium up for reconsideration. Hermosa Beach residents will vote March 3, 2015, on a ballot measure to allow slant-drilling into the Bay. E&B Natural Resources wants to erect an 87-foot drilling rig and up to 34 wells on a 1.3-acre plot in a residential neighborhood, extracting up to 8,000 barrels of oil each day by slant-drilling under the seafloor and surrounding beach communities. E&B had an existing lease arrangement before the current moratorium was put in place.

MYTH: This is a relatively small project that only affects a small slice of the Bay and really is an issue for Hermosa Beach to decide.

FACT: Oil spills know no boundaries. With nearly 50 million annual visits to Santa Monica Bay beaches and a coastal economy worth over $10 billion, a spill off Hermosa Beach would be a financial and ecological nightmare for all of Los Angeles. 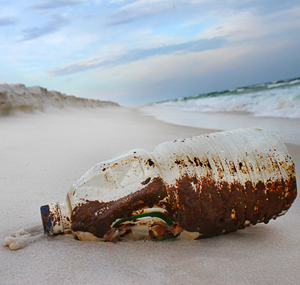 Slant-drilling into the Santa Monica Bay from Hermosa poses significant environmental and economic risks throughout Los Angeles County and the entire Bay. This project would also be precedent-setting: There are no drilling projects currently accessing oil under the Bay. Slant-drilling from onshore under offshore waters raises many of the same concerns as any other offshore oil drilling project, in terms of increasing the risk of a coastal oil spill, causing air and water pollution and contributing to global climate change. The proposed drilling operation is only six blocks from the beach. If a spill cannot be contained, oil will ultimately reach the Santa Monica Bay and surrounding communities.

FACT: A revised EIR (Environmental Impact Report) states that there is a 12% chance of an oil spill from the proposed project.

Oil spills have the potential to significantly impact marine life and habitats in the Bay and throughout the Southern California Bight because they can spread rapidly over great distances and can be difficult to detect and clean up. A 12% chance of a spill is simply not worth the risk. An oil spill that originated in El Segundo in the 1990s reached Malibu Lagoon, and the infamous 1969 Santa Barbara oil spill spread along the coast for more than 35 miles. Furthermore, any oil spill is likely to have an impact on tourism and the coastal economy. Our state and local community has made significant investments to protect and enhance marine and coastal habitats in the Bay, such as establishing marine protected areas in Malibu, Palos Verdes and Catalina Island; restoring Malibu Lagoon; Santa Monica Bay Restoration Commission’s National Estuary Program; and the planned restoration of Ballona Wetlands. An oil spill would directly undermine these long-term efforts.

FACT: The royalties proposed by E&B Oil may seem attractive in theory, but they are theoretical and wildly speculative.

The final cost benefit analysis (CBA) and supplement added in January 2015 show a significant drop from initial revenue estimates for Hermosa Beach from the proposed project. Projections state that only $25 million to $77 million could go toward the city’s general fund over the 35 year life of the project—less than $1 million per year. And that’s with the price of oil pegged up to $95 per barrel. With current oil prices at about $40-$45 per barrel, revenue to the city’s general fund may only equate to half that income. Additionally, should the project be approved, the CBA estimates that the project will cost the city $19 million to $26 million to relocate the City Yard where the operation would be sited, remove contaminated soil from the site and to displace a revenue-generating storage facility.

In addition to the substantial project costs cited above, the CBA predicts a 10% drop in property values for home near the drilling site should voters approve Measure O.

But there are no guarantees when it comes to oil exploration. No one can accurately predict the productivity of proposed wells. Furthermore, the use of royalty payments is highly restricted, given that the majority of the revenue will come from drilling in the Tidelands. State law blocks vast majority of funding on services like police and street improvements. Despite promises of the project being a boon for local schools, according to the updated supplement to the CBA reflecting current oil barrel prices, the Hermosa Beach City School District is only projected to receive net revenues of approximately $900,000 over the 35-year life of the project. That pencils out to be about $26,000 annually—enough to cover the education costs of less than five Hermosa students. This is a small benefit when weighed against the health risks associated with drilling in a residential area.

FACT: The city has already set aside $6 million for this purpose, and staff is researching other fiscally prudent ways to pay the remainder of the $17.5 million over time that would not put undue hardship on city budgets.

The city’s cost-benefit analysis estimates loan payments to be roughly $750,000 to $800,000 annually (over 30 years). That amount totals about 3% of the City’s annual budget – not an insignificant amount, but certainly not enough to cause severe financial stress. The study also estimates that if a payment plan was based on levying taxpayers, the average cost would be $150 a year on the average home price of $1 million—a modest insurance policy against the almost-incalculable financial burden of an oil spill. However, in a financial presentation provided by City of Hermosa Beach experts at the Hermosa City Council meeting on January 27, 2015, it was clearly stated that the City does not need to raise taxes to pay E&B if Measure O is defeated. In fact, there are compelling indications in the new supplement to the cost-benefit analysis that Measure O’s defeat would actually be less costly than its passage.

FACT: Noxious gasses released from the site may cause air pollution and odor issues, which have led to respiratory problems, eye and skin irritation, headaches and other ailments in communities where oil drilling already occurs. 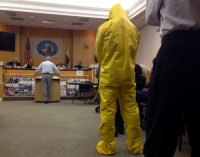 Hermosa Beach is the most densely populated coastal community in California, with about 13,670 people per square mile. It also attracts nearly 4 million visitors annually. The proposed project site lies in close proximity to schools, parks, neighborhoods, trails, businesses, and the beach. Thus, public health impacts are a major concern for Hermosa Beach residents and visitors alike. The Health Impact Report was finalized in September 2014, and other studies of the potential health risks posed by oil drilling operations elsewhere cite heightened rates of respiratory ailments and depression. The H.I.A. identifies a 28% increase in nitrogen dioxide, which is associated with asthma in children. Noise and other quality-of-life issues also pose a community health concern, as drilling operations are proposed to occur day and night. Seniors, children, and people with existing medical conditions represent the populations most vulnerable to these health threats.

FACT: Nearly half of Hermosa Beach residents live within a half mile of the proposed drilling site. The project would have significant negative impacts on safety, aesthetics, odors, wildlife, water quality and noise.

Drilling would occur within 100 feet of homes, businesses, and widely used greenspace, which raises serious health and safety concerns. For comparison’s sake, homes, businesses, and schools in Dallas are protected from oil drilling by a 1,500-foot setback requirement. Oil drilling operations can also be dangerous and have caused blowouts and hazardous spills in other communities. The Environmental Impact Report asserts that the project would have significant unavoidable impacts in 9 areas: aesthetics, air quality (odors), biological resources (wildlife), water quality (spills into subsurface soils/or ocean through storm drains), land use (open and residential spaces), noise, recreation, safety and risk of upset (e.g. blowout during drilling). The project also has the potential to threaten the municipal water supply, exacerbate seismic instability, and cause subsidence (caving in or sinking of land from drilling activities).

MYTH: The drilling operations will not affect the aesthetics and livability of surrounding neighborhoods

The oil project would occur within 10 feet of heavily trafficked Valley Drive, and less than 100 feet from homes, businesses, and the Hermosa Valley Greenbelt. The 87-foot drill rig and associated 110-foot work over rig will introduce a visually dominant, industrial feature to the community of Hermosa Beach. And, although they will not be permanent features, E&B proposes to use them for drilling and redrilling efforts over the 35-year lifespan of the project. A 35-foot wall will permanently surround the site in attempt to buffer noise impacts. Additionally, traffic is a major community concern. E&B estimates an additional 10,500 miles of heavy truck traffic during the first 10 months of construction alone, and 32 truck trips daily during subsequent phases of the project.

MYTH: Los Angeles County already has numerous oil wells, so there is precedent of safe drilling in the region.

FACT: Although there are many oil wells throughout Los Angeles County, safety remains a concern with all forms of oil drilling in densely populated regions. 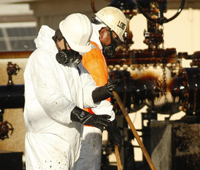 On May 15, 2014, 10,000 gallons of crude oil spilled in Atwater Village, Glendale, when an above-ground pipeline burst, sending a geyser 20 to 50 feet into the air. In March, Wilmington had crude oil running down its residential streets due to a ruptured pipe. Communities elsewhere along the California coast, like Goleta and Carpinteria, have successfully fought slant-drilling proposals. Most recently, the City of Carson rejected a bid by Occidental Petroleum to drill within city limits. The proposed operation in Hermosa Beach poses great risk to the economic, environmental and community health of the Santa Monica Bay and the greater Los Angeles region. Allowing drilling to take place underneath the seafloor in Hermosa Beach would set a terrible precedent for future protection of Santa Monica Bay. It opens the door for further exploitation of one of our region’s greatest natural resources and recreational havens.

What can you do to prevent oil drilling from taking place in Santa Monica Bay?

Check out our Hermosa Activist’s Toolkit.


← The Mystery of the Stranded Pups

Dodging a Bullet in Atwater Village →

Make a Splash on Giving Tuesday!

Give a donation to inspire 10,000 local students to become environmental stewards and protect our future from oil spills, plastic pollution, and the impacts of climate change.

Donate to Heal the Bay