No White Lie: She Loves Swimming With the Sharks

Sarah Munro-Kennedy, an intern at our Santa Monica Pier Aquarium, spent her summer swimming with the sharks in Africa. Big ones!

For as long as I can remember, I’ve loved sharks. Something about them has worked its way into my heart. I never knew what that something was until this summer. I’ve been diving with sharks numerous times before, but my dream had always been to see a white shark. This summer I was fortunate enough to travel to Gansbaai, South Africa to volunteer with an eco-tourism company called Marine Dynamics. I spent two weeks living a dream come true.

After arriving in Africa, my hosts took me to the chalets where all the volunteers stay. I claimed my bed and put my belongings down, grabbed my bikini, a towel, and my cameras.We were going straight to the boat to do our first dive! A quick 15-minute boat trip would take us from Kleinbaai harbor to Shark Alley.

The boat, called the Slashfin, was one of the fastest and most stable that I’ve ever been aboard. It’s named after a legendary nearly 15-foot male white that had severe damage to his dorsal fin. The secure diving cage on board had a perfectly sized slot to stick your underwater camera through, while also being small enough to protect the shark from getting trapped and possibly injured inside the opening.

When we reached Shark Alley, Kelly, the marine biologist  on board  told us about the different animals living on the islands on either side of Shark Alley. Dyer Island is located to one side, and is a protected bird sanctuary, home to 900 pair of endangered African penguins. On the other side is Geyser Rock, a  home to a colony of 60,000 Cape fur seals.

We continued on to a spot on the backside of Geyser Rock known as Wilfred’s Rock. The crew anchored Slashfin and dropped the cage in the water. They had everything ready on board: 7 mm hooded wetsuits, booties, masks, and a weight belt. I quickly got changed, grabbed my cameras and prepared myself to come face to face with one of the world’s oldest and most highly evolved apex predators.

As I climbed into the cage, the cold water chilled my bones.  I looked down and saw a shadow rising from the depths. Before I could fully submerge myself, a 12-foot  white shark surfaced inches from the cage, its dorsal fin gliding through the water like a hot knife through butter. It swam gracefully around, eyeing the cage, slowly looking at me and the other divers. The crew then tossed in a bait line and a wooden seal decoy that they use to draw the whites closer to the cage.

The shark disappeared but after a minute, two larger sharks appeared. One went straight for the bait, bumping it with its snout to see what it was. The other dropped down into the shadows. After a minute or two, the shark rose from the darkness. It lunged at the bait line, breaching, with its entire body out of the water. What an incredible sight.

Within an hour, I saw 17 whites. All of the sharks seemed highly curious, but not vicious, as they have been portrayed in numerous movies and stories. They never attacked the cage and never showed any aggression towards anything other than the bait and seal decoy. They were graceful, swift, and powerful.

For the next two weeks, I got to live my  dream of swimming with white sharks, over and over again. The trip marked one of the best experiences of my life, and I will definitely be returning next year for a much longer stay. 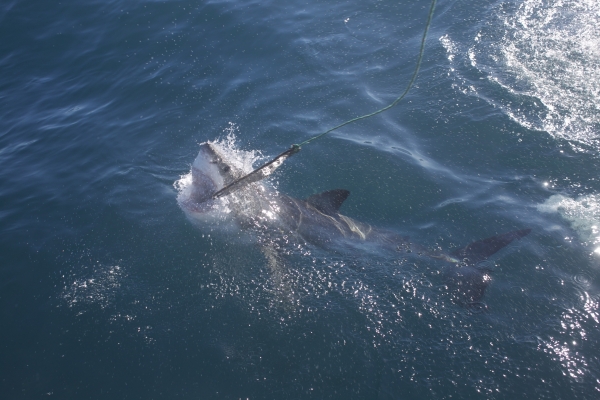 A white shark takes the bait in Shark Alley off the coast of South Africa. 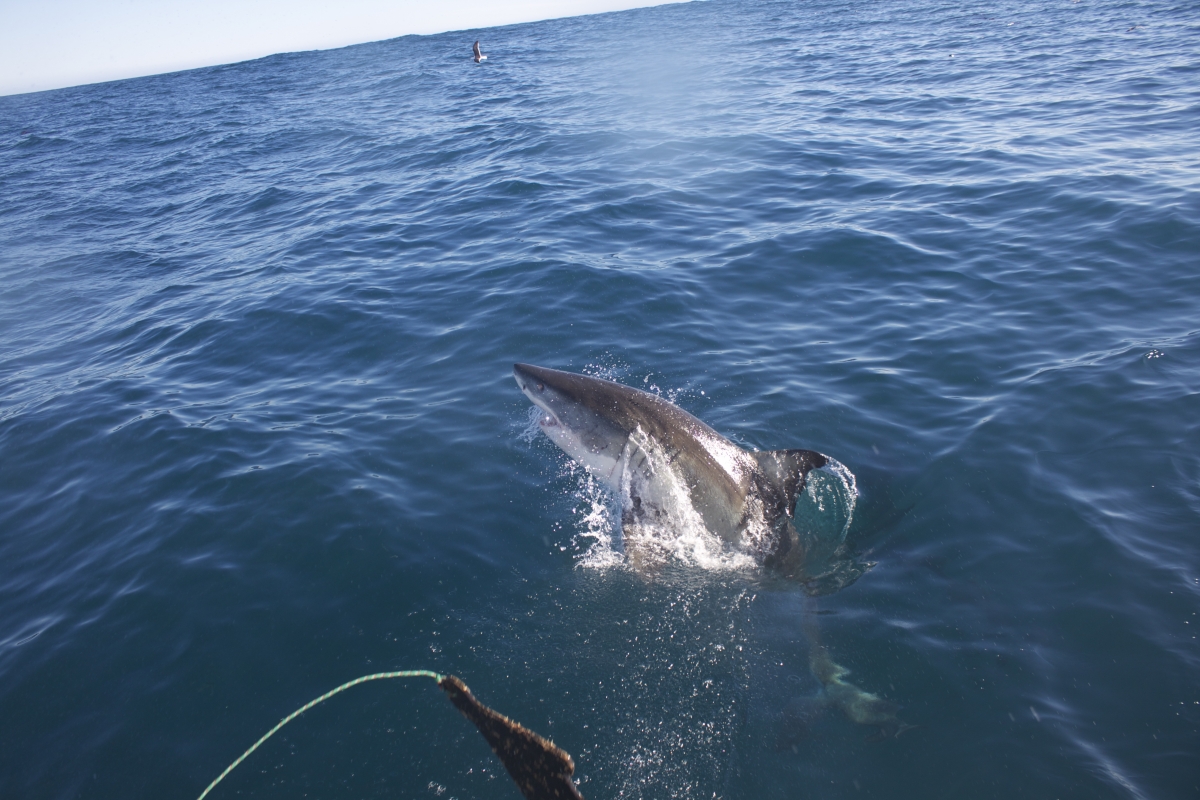 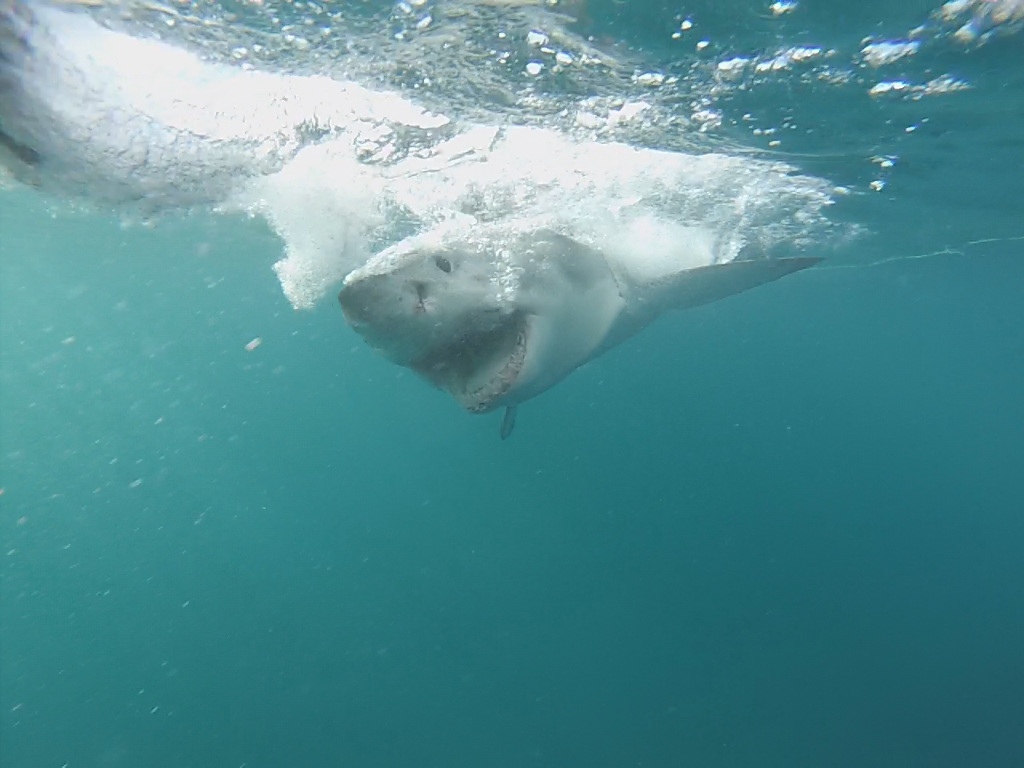 From inside the shark cage! 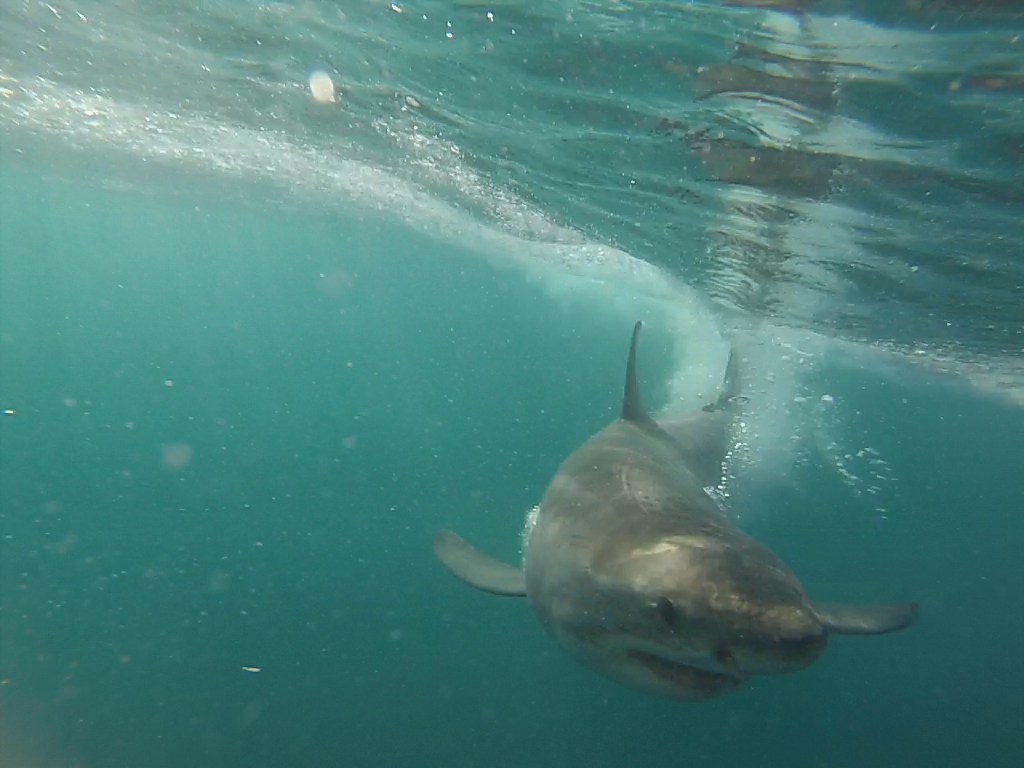 Still safely in the cage.

← Confessions of a Shark Kisser