Nosing Into Staph Infections at the Beach

Heal the Bay scientist Ryan Searcy explains why you may see people on the shore donating their body to science. 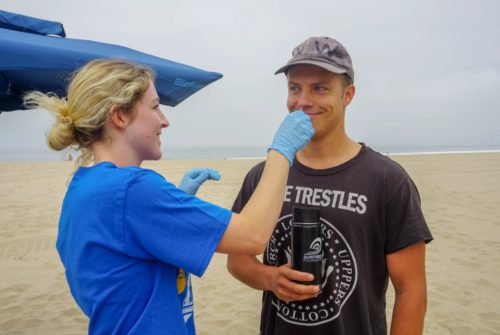 Heal the Bay knows a thing or two about water quality. We’ve provided water-quality tools to millions of California beachgoers, helping them make decisions about which beaches are safe to visit. The most important monitoring methods we have are those that determine the levels of so-called fecal-indicator bacteria, or FIB, at a given beach.

The NowCast system (in its 4th year) and the Beach Report Card (in its 29th year) provide a daily and long-term look, respectively, at FIB at California’s most popular beaches. FIB are linked to the presence of fecal-borne pathogens like Cryptosporidium and norovirus, and high levels of FIB are correlated with illnesses like skin rashes, ear infections, and gastroenteritis. So knowing how much FIB is present at your beach can help you stay healthy.

However, FIB are not always indicative of every human pathogen under the sun. For example, the presence of Staphylococcus aureus is not associated with FIB levels, and you can still catch a nasty staph infection on days where FIB levels are low. Staph gets into the ocean through stormwater runoff discharges from wastewater treatment facilities, and even human shedding at beaches.

A 2012 study of some Southern Californian beaches showed staph was present in 59% of seawater samples. Contracting staph can lead to severe skin and soft tissue infections, sepsis and hospitalization, and even death. And to make things worse, the authors of the study also found strains of staph that are resistant to antibiotic treatment (called methicillin resistant Staphylococcus aureus, or MRSA) in some of their samples.

If you are sufficiently freaked out by all this, I do have some good news.

Heal the Bay is partnering with a team of UCLA scientists, Surfrider Foundation, and USC Sea Grant to collect data on MRSA and how it affects those who frequent the ocean.

Megyn Rugh, a UCLA Ph.D. student who is leading this project, hopes to determine the ocean’s role in transmitting superbugs to humans.  It has been documented that antibiotic-resistant pathogens are frequently harbored by those who work in the meat processing industry or in hospitals. But Megyn suspects that they are also often present in frequent ocean-users, namely surfers.

Her past work has shown that there is MRSA present in the water at some of the region’s most popular surf spots. By collecting nasal swabs of surfers who paddle out at breaks in the Santa Monica Bay, Megyn hopes to prove that those with high environmental exposure to MRSA are more likely to harbor it in their bodies.

How is Megyn collecting this data, you might wonder? Well, here is a PSA on behalf of the Surfer Resistance Study:

From now through the end of the winter, Megyn and her team will be collecting samples at El Porto in Manhattan Beach every Tuesday and the Breakwater at Venice Beach every Wednesday.

If you’re heading out for dawn patrol, stop by her makeshift beach lab and get your nose swabbed. And if you’re not a surfer, for science’s sake you can still help! Megyn is taking swabs of non-oceangoers’ noses as a control, so stop by when you’re out running or walking your dog. (She’s pictured in the photo at top.) 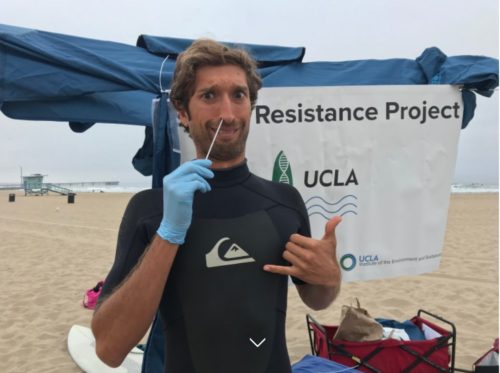 Heal the Bay has worked hard for many years to prevent MRSA and other superbugs from getting into our coastal waters in the first place.

We know that normal staph in seawater can evolve into MRSA through transfer of antibiotic-resistant genes that come from elevated levels of pharmaceuticals in ocean water. (And you thought Halloween was over.) In 2016, the County of LA failed to enact measures that would hold suppliers of these drugs responsible for taking back unused prescriptions so that they don’t end up in the water.

If UCLA’s study can show that surfers are more likely to get sick from MRSA they contract in the water, advocacy groups like Heal the Bay will have ammunition to get polices in place that improve water quality.

Until then, our advice (as always) is to stay out of the ocean for at least 3 days after a heavy rainfall, and to avoid swimming and surfing near stormdrain outlets.

If you are interested in learning more, or supporting this project with a donation, contact Megyn Rugh at megynrugh@ucla.edu

FAQ: How the Woolsey Fire Will Affect the Bay →