Heal the Bay staff scientist Dana Murray reports on the shelving of a poorly conceived desalination plant in Huntington Beach.

What is the future for ocean desalination in California?

There’s no debate that the Poseidon project is precedent-setting and will have long-term impacts on the future health of California’s ocean. A coalition of groups concerned about the devastating effects that open-ocean intakes can have on marine ecosystems, including NRDC, Surfrider, California Coastal Protection Network, Orange County Coastkeeper and Heal the Bay, has been monitoring the situation closely. If the proposed plan went forward, it would inform decision-making on several other plants now on the drawing boards up and down the coast.

I may have griped a bit about rising before dawn and driving more than five hours round-trip in traffic jams to the meeting in Huntington Beach, but today turned out to be a wonderful day for ocean advocates fighting for sustainable seas. It also reinforced my trust in Coastal Commission staff doing a thorough job and Commissioners’ exercising sound judgment.

Our communications department is always admonishing us to not “bury the lead.” So here it is: after hours of debate and staff presentations that made it clear that the current proposal wouldn’t pass muster, Poseidon pulled it off the table.

Huntington Beach residents clad in white holding “NO PO$EIDON” signs, union workers in construction helmets, staff from environmental NGOs that have been working on desalination issues for years and just about every past mayor of Huntington Beach all showed up today.

Four hours into the meeting, Commission chair Mary Shallenberger reported that staff had received so many public comment request cards that it would take 12 hours to hear everyone if we were each given two minutes to speak! An already long day had just gotten longer…

Heal the Bay supported Commission staff’s recommendations and stressed the precedent-setting nature of today’s decision, asking Commissioners:  “What do we want future desalination in California to look like? This outdated and environmentally destructive design?”

Heal the Bay and other NGOs urged  the Coastal Commission to set the desalination bar higher. Approving the proposed project today would set the bar far too low for environmental sustainability in California.

One of the critical areas of debate was whether Poseidon’s plan of using open ocean intakes versus environmentally preferred sub-surface intakes made sense. Open ocean intakes can pull in more than 100 million gallons of water each day and tens of millions of fish larvae, eggs and marine invertebrate.

Many public commenters, Commission staff, and Commissioners pointed to the superior technology of sub-surface intakes and stressed that the better technology is available. Poseidon refused to incorporate it, with numerous excuses about infeasibility, costs, and time.

Some elected officials and union workers testified in support of the proposal, but didn’t discuss the specific merits of the project or rebut challenges. Rather, they talked in a general way about how Southern California needs drinking water and desalination is a key way to ensure future supply.

However, not everyone is drinking what Poseidon has to offer. Commissioner Dayna Bochco summed it up: “Logic is against this project.”

Following five hours of public comment, deliberation began with Bochco, who is also a Heal the Bay board member, directly stating: “We must do [desalination] right and I do not believe this project is right.”

Bochco underscored the negative environmental impacts of the proposed plan, noting “this is an area surrounded by marine protected areas … and this intake and outflow will affect the MPA network connectivity … with potential for very severe marine life harm.”

After more than two hours of deliberation among Commissioners, and a couple of different motions, Poseidon ultimately withdrew its application for the project permit. Company officials indicated they plan to re-apply with a more complete application, and more feasibility studies.

Shallenberger advised Poseidon that the “best way to get a ‘yes’ is to work with staff … going forward, get all the studies done and bring it to us complete.”

Today, we helped stall a badly conceived proposal, but the general discussion about the feasibility of desal plants up and down the coast continues … and Heal the Bay will be part of it.

While we will keep a close eye on Poseidon’s reworked proposal in the near-term, the state needs to have long-term desalination policy that ensures we don’t suck the life out of the ocean to meet our never-ending thirst for water. Our science and policy team will continue to track the process and weigh in on the formulation of the upcoming statewide policy. 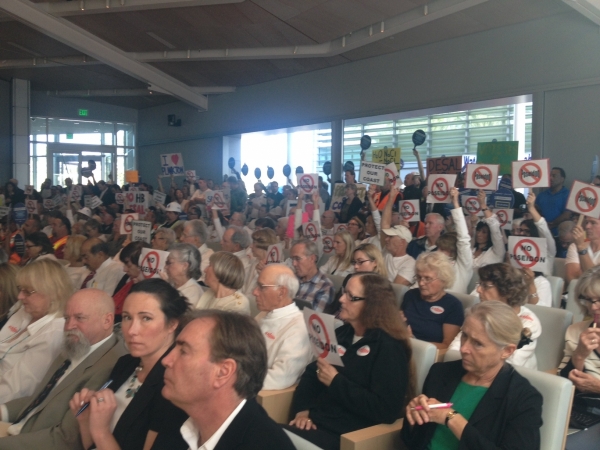 A packed house debated the future of desalination in California at  the November 13 Coastal Commission hearing.

← A Kangaroo in Compton?