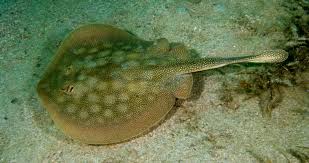 Apryl Boyle, our chief aquarist, celebrates a misunderstood species in our local waters.

If you’ve spent significant time in Santa Monica Bay during the summer, you’ve probably seen or bumped into a ray in the ocean shallows.

At times I’ll be surfing, look down, and see several swim by that are looking for their next meal. Their graceful stride reminds me of a bird in flight and is mesmerizing to watch. Among the animals you’ll see in the Bay: stingrays (Urolophus halleri), bat rays (Myliobatis californica), thornback rays (Platyrhinoidis triseriata), and the shovelnose guitarfish (Rhinobatos productus).

At the Huntington Beach Pier, I saw a man who had caught a very large shovelnose guitarfish and had it laying out in front of him. As the animal gasped for air, I attempted to kindly convince the man to release it back to the wild. The breeding-age animal surely deserved better treatment.  I tried to explain that larger fish keep our oceans healthy and in balance. He wasn’t having it. Some primordial fear had this man convinced he was doing the world a service by killing this creature. The incident continues to haunt me.

Rays are higher-level predators that hunt and consume mollusks, worms, crabs, and other small fishes. They are in the same group as sharks, as they have a skeleton made of cartilage rather than bone. They’re the most diverse of the cartilaginous fishes, with approximately 600 species around the world.

They range in size from a human adult’s hand to those with a nearly 20-foot wingspan, such as the manta ray pictured below. They can be found all over the world’s ocean, from Antarctica to tropical water (although they’re more abundant in warmer water). Because they have such a wide diversity and distribution, rays are critically important to nearly all marine ecosystems and have distinct niches where they live. 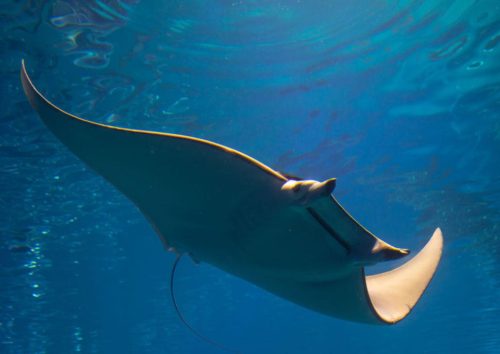 Fossil records indicate that stingrays existed as far back as 150 million years ago but over 100 species are threatened today. Humans pose a real threat to their existence through overfishing, habitat loss, and accelerating climate change.

Like sharks, they are feared and largely misunderstood. They’re not normally aggressive and I’ve had the pleasure of working with some that had amazing personalities and would greet me whenever I was near. Yes I had food for them, but they were always quite friendly.  I’ve even been “hugged” by rays.

But what about being stung?

Stingrays do not indiscriminately sting humans without provocation. Sometimes people accidentally step on a ray as they walk out into the ocean. The animal’s instinctual reaction is for the tail to come up as protection. The tail has a stinging mechanism, or barb. It is jagged and has a fish hook-type shape. If you try to take the barb out of your skin carelessly it will rip more of the flesh than when it entered. If you are stung, you need to immediately soak the area in water as hot as you can stand and seek immediate medical assistance.

How can you avoid being stung? Try shuffling. No, not the Super Bowl Shuffle of the 1980s, the timeless Stingray Shuffle.  Shimmy your feet as you enter the ocean. This creates a vibration that alerts rays you’re near and they need to move. Trust me, they don’t want to be stepped on. I surely wouldn’t want a creature exponentially larger than I am stepping on my back. I would definitely react defensively and that’s what they do.

Want to see a ray up close? Come visit the round stingrays at our Santa Monica Pier Aquarium.

← Garcetti’s Tips on How to Be an Effective Advocate