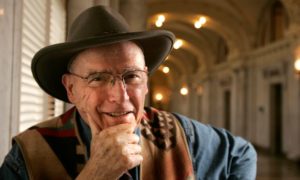 In a guest blog post, Mark Gold, our former president, reflects on the lasting legacy of the late jurist Harry Pregerson — a man who truly healed the Bay.

When one thinks about the esteemed and distinguished career of U.S. 9th Circuit Court of Appeals Judge Harry Pregerson, his leadership on environmental protection is not what first comes to mind. However, his Clean Water Act decisions were nothing less than transformative for the City of L.A. and the Santa Monica Bay.

In the mid-1980s, Judge Pregerson was the presiding judge on the groundbreaking Hyperion Sewage Treatment Plant case that led the City of L.A. to invest more than $4 billion into modernizing the treatment plant to meet the full secondary treatment requirements under the Clean Water Act. The resulting federal consent decree also required the replacement of significant portions of the city’s sewer system and the initiation of a stormwater pollution abatement program.

The highly contentious case was brought by the state and federal government and the newly formed environmental group Heal the Bay — a friend of the court on the case. Shortly after the settlement, I began volunteering for Heal the Bay and meeting with Judge Pregerson, the city, the state, and the U.S. EPA at semi-annual consent decree meetings. More than any other experience in my career, these meetings taught me how to affect successful environmental change, and Judge Pregerson was the reason why.

Judge Harry Pregerson, who passed away last week at the age of 94, was about the most unassuming person you have ever met. He was folksy and put everyone at ease, even when the animosity between the disputing parties was at its greatest point. By the late 1980s, he still was not an expert on sewage or even the Clean Water Act, but he was masterful in getting disparate parties to find common ground and even to develop mutual respect.

Subsequent to the Hyperion case, he was the key figure in litigation from the then Santa Monica Baykeeper over the city’s chronic sewage spills into L.A. waterways. The result: new investments amounting to more than $1.5 billion in sewage infrastructure and a seven-fold reduction in annual sewage spills.

Despite these extraordinary successes, I most admire Judge Pregerson for standing up to Mayor Richard Riordan’s administration in their attempts to get out of the Hyperion Consent Decree. The state was in a recession and upgrading Hyperion was deemed a waste of money by leaders in the administration. With no fanfare and no media, the sludge-judge shut down the effort. Ethics triumphed over cost cutting and the environment was the beneficiary.

Judge Pregerson was a highly ethical, humorous, and incredible human. As a result, he presided over one of the most successful urban environmental transformations in U.S. history. Foes became lifelong friends and the Santa Monica Bay went from having a dead zone, routine enormous sewage spills, and fish with tumors, to an unparalleled environmental success story. None of this would have happened without the quiet, unassuming leadership of Judge Pregerson.

It is hard to believe that Judge Pregerson is gone. We will still see his name on the 105 freeway, at the Harry Pregerson Child Care Center, and on the lab building at Hyperion. And, I’ll continue to think about all he has meant to Los Angeles’ environment when I look at my office bookshelf to see the commemorative cowboy-hat shaped hardhat so many of us received during the Hyperion Full Secondary celebration in 1998. He bettered the lives of so many and always fought for what was right. L.A. is a better place because of him.

You can read more of Mark’s thoughts about sustainable L.A. by following his blog posts.

← Imagine L.A. Without Our Favorite Places