Iceplant, the green succulent plant found flanking our freeways, is well-known to many Angelenos. It’s also highly invasive and problematic, now that it’s taken over significant areas of coastal habitat and dunes in California.

The California Invasive Plant Council classifies iceplant’s potential impact on native ecosystems as high and you can find it listed as one of the “Terrible 10” invasive plants of Southern California.

Iceplant has negative impacts by crowding out native plants, creating a monoculture that provides low-value habitat. The overall impact is a reduction in biodiversity in plants and animals.

A proposed project to remove iceplant on three acres of the Ballona Wetlands Ecological Reserve sought approval from the California Coastal Commission at a March 10 meeting. The California Department of Fish & Wildlife and the Bay Foundation created the plan, which calls for removing iceplant by placing tarps over the iceplant and having it killed by solarization.

It’s a tried-and-true method to remove invasive iceplant in a non-invasive way, ironically enough. It has been used in the Carpinteria Creek Mouth project in Carpinteria and in the Channel Islands Restoration Projects in Santa Cruz and Anacapa Islands. Further, any wildlife would easily be able to escape from underneath the tarps because ample space is left between the garden staples used to anchor the tarps down.

Heal the Bay supports this iceplant removal project, which will help to restore ecological function to the degraded wetlands.

The Ballona Wetlands are particularly important because they provide unique and increasingly rare open space and wetland habitat in urban Los Angeles and Southern California. The benefits that wetlands provide (such as wildlife habitat, water purification, buffering against flooding, and recreation) can only be achieved when they are healthy and functioning.

In areas like Southern California, which have faced unprecedented wetland loss (upwards of 95%), it is extremely important to protect and restore these valuable habitats. The remaining 600 acres that comprise the Ballona Wetlands Ecological Reserve have been highly altered and degraded.

Today, more than half of the reserve has been taken over by non-native invasive plants such as mustard and iceplant1, creating habitats with reduced ecological, social, and economic value. To restore function, projects like the removal of iceplant need to occur, along with larger-scale restoration efforts that are planned. Restored wetlands show marked signs of success, such as increased biodiversity, carbon sequestration, improved water circulation, and improved water quality2.

Last year, Heal the Bay joined forces with our partners at Friends of Ballona Wetlands, Surfrider, and Los Angeles Waterkeeper to craft the Nine Principles of Wetland Restoration, which outline practices of successful scientifically-based wetland restoration projects. A total of 13 respected environmental groups signed on in support of these Principles. Heal the Bay and our partners have been sharing the Principles with government agencies and elected officials to educate them on the importance of wetlands and the need for their restoration in a manner consistent with the Principles.

The proposed iceplant removal project follows the Principles of Wetland Restoration because it is based in scientific evidence, native plants and wildlife will be safeguarded, other alternatives were examined, and monitoring the site response to the restoration activities will occur.

Despite numerous scientific studies showing that the Ballona Wetlands are highly degraded and continue to deteriorate, the hearing for the proposed project met with some opposition, led by the Ballona Institute. (The plan also met with public support at the meeting from Friends of Ballona Wetlands and Team Marine from Santa Monica High School).

Sitting in the hearing, I could not believe that an argument was being made to keep invasive iceplant. I felt like I was in an alternate reality where up was down, native plants were bad, and iceplant was good.

Listening to the opponents’ testimony, I surmised that their evidence was not based in science as I understand it. Their arguments focused on the beliefs that iceplant provides important habitat for numerous native species and that animals (the Pacific chorus frog in particular) would be killed by the plastic tarps.

Photographs were shown as “evidence” that there were many native animals that depend on the iceplant as habitat. First, photographs are not scientific evidence, and there was no further evidence showing that native species rely solely on this habitat or really depend on it. Many species are adaptable and will use habitat that is less than ideal, but that doesn’t mean that they need it or that some other habitat with native plants and animals wouldn’t be better.

The Pacific chorus frog was touted as a species that depends on the iceplant habitat and would be “endangered” by the removal of iceplant. I studied this species of frog for my doctoral dissertation at UCLA. As I said in public testimony, I have a great fondness for this frog but I also am not worried about them and they are not a species of conservation concern. They are widespread and highly adaptable; among our local native amphibians, they are the most resilient to human disturbance. That doesn’t mean that we should be careless with them. The proposed project takes care to protect wildlife while tarping and these frogs move around easily, using a wide variety of habitats, and do not rely on iceplant habitat in any way.

Further, the opposition cited a recent New York Times article as “scientific evidence” that invasive species aren’t necessarily bad. Aside from taking issue with a New York Times article being called scientific evidence, I will also say that I had previously read this article and do agree that not all non-native species are equal and not all should be viewed as bad or assumed to have negative ecological impacts.

However, as the article states, “some alien species are undeniably harmful” and I would put iceplant in that category. Numerous scientific studies have documented iceplant’s negative impacts on soil chemistry, native species, and hydrology3.

The opponents of the project stated a belief in the principle of “first do no harm.” And strangely enough, I agree with them on that point but our conclusions differ: By doing nothing, we are doing harm.

The Ballona Wetlands have such great potential but desperately need restoration, whether it is in the removal of invasive iceplant, reconnecting the creek to the wetlands, or removing layers of fill.

Sometimes you need to act – smartly and with care – to protect something valuable. Letting nature “take its course” isn’t wise when manmade impacts are the very thing changing the course of events in our few remaining wetlands.

Thankfully, the Coastal Commission agreed that the proposed project is beneficial and approved the project. Overall, this is a small restoration project; bigger projects are to come and opposition will continue. Heal the Bay will be there, along with our partners, to support and fight for a healthy and functioning ecosystem at Ballona Wetlands.

The California Department of Fish & Wildlife, which oversees the Ballona Wetlands, expects to release its long-awaited Environmental Impact Report on its proposed restoration of the entire wetlands sometime this summer. 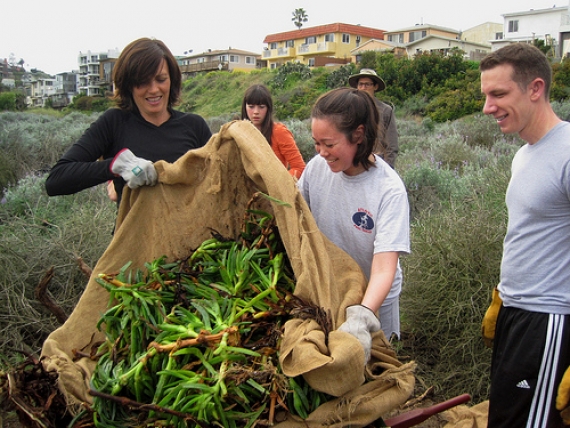 Friends of Ballona volunteers removing iceplant from the wetlands as part of a separate initiative.