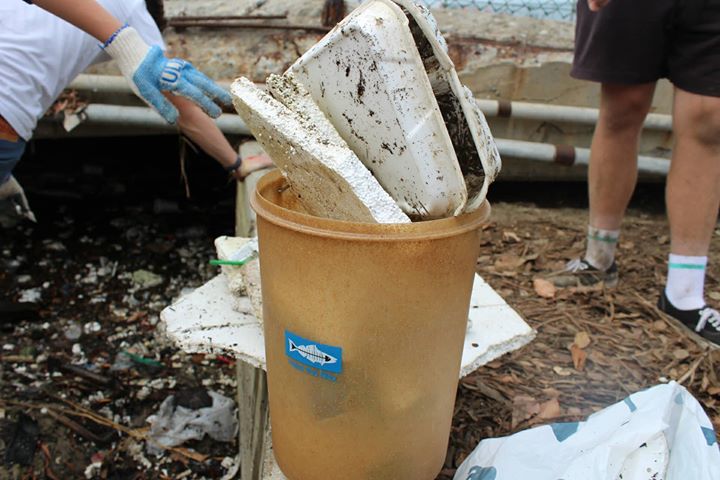 Santa Monica often sets the stage for the rest of Southern California when it comes to curbing consumer practices that trash our oceans and neighborhoods.

In 2007, the Santa Monica City Council passed its first ordinance regulating the use of polystyrene, the type of foam typically used in fast-food and drink packaging that has become such an eyesore on our local beaches and neighborhoods.

Today, 110 municipalities in California have passed some type of legislation on the use of polystyrene.  Progressive cities like San Francisco, Malibu and Manhattan Beach have comprehensive bans that include retail sales, coolers and ice chests. 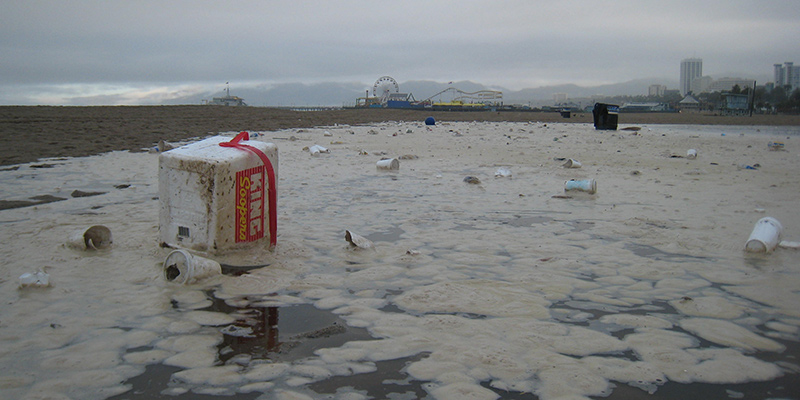 Last night, the City Council approved modifications to the City’s earlier ordinance on polystyrene, extending protections that will reduce blight and save marine life.

The new rules extend the existing polystyrene ban to include Food Service Ware (plates, bowls, utensils, cups, straws, and more) and prohibiting bio-plastic #7 and plastics #1-5. They also encourage alternatives such as paper, fiber, bagasse and wood for takeaway packaging.  They also require that takeaway straws and utensils only be made available to customers on a request-only basis, and that they be “marine degradable.”  There are exceptions for people with medical conditions for the use of straws.

These modifications are crucial if we are to systematically reduce plastic pollution in our communities and oceans.  In the last 18 years, Heal the Bay volunteers have removed over 736,000 pieces of plastic foam trash from L.A. beaches.  The harmful flow of single-use plastic foam is a constant threat to marine animals, wildlife and habitats.

And this pollution problem is only growing.  Of the more than 375,000 tons of polystyrene (plastic foam) produced in California each year, not even 1% gets recycled.  The rest ends up in our landfills, waterways and the ocean. 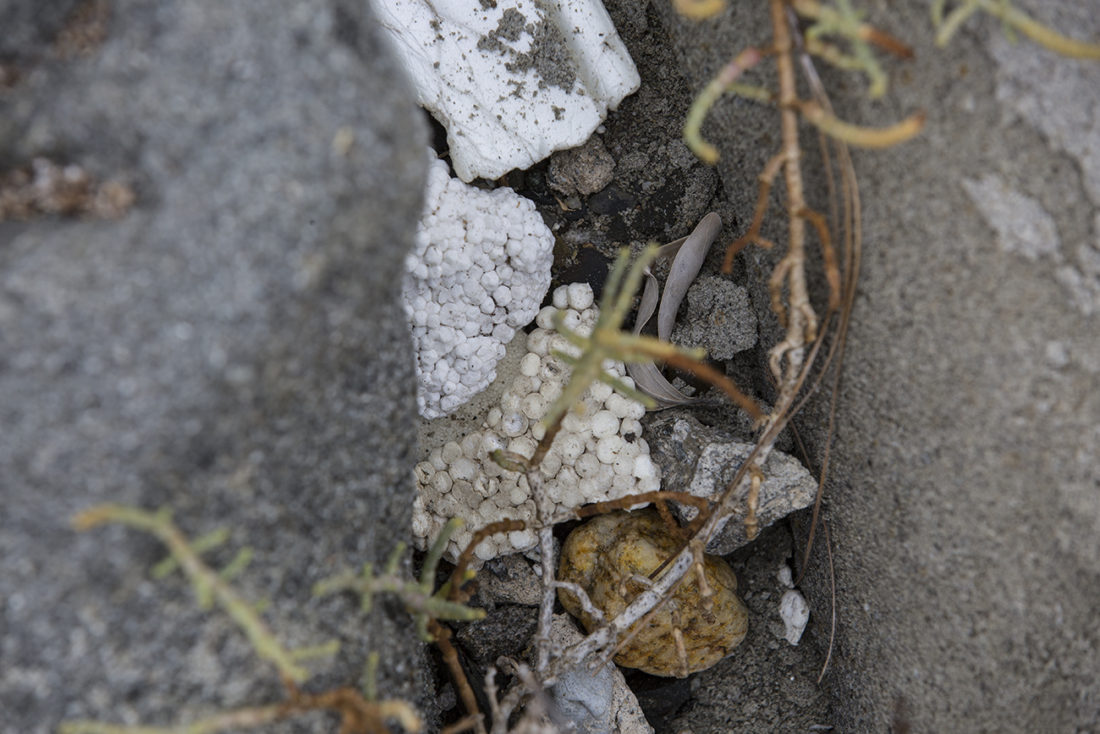 The new rules will help the city achieve its Zero Waste goals by 2030 — through diversion, composting, and recycling.

Nearly 30 people, ranging in age from 3 to 70 years old, spoke in support of the changes. Our policy leaders Katherine Pease and Mary Luna led the Heal the Bay contingent.  Councilmembers seemed enthusiastic during public testimony and wanted to learn more about how the City staff could work with businesses to facilitate transitioning polystyrene out of use. 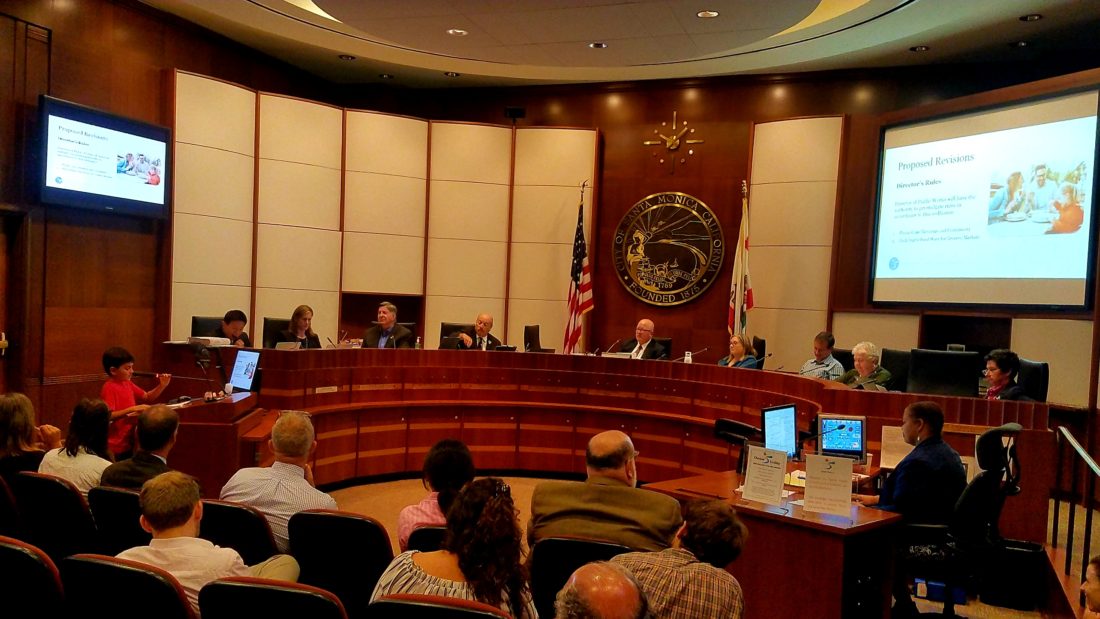 Beginning January 1, 2019, vendors are not allowed to provide containers made out of polystyrene #6, or from other plastics #1-5; all containers need to be made out of materials like paper, wood, and fiber that meet the definition of marine degradable.

After that date, any business in Santa Monica serving food or drinks in containers labeled #1-6 would not be in compliance with this polystyrene ordinance, and the public may choose to educate them about the ordinance, or to file a report with the City’s Code Enforcement division to ensure compliance.

The definition of marine degradable is included in the ordinance language, specifying that products must degrade completely in marine waters or marine sediments in fewer than 120 days. Products predominantly made with plastics, either petroleum or biologically based, are not considered marine degradable.

Heal the Bay staff and our partners asked the Council to strengthen the ordinance by adding polystyrene items to the prohibited list, such as retail sales (e.g. packing materials, foam coolers) and grocery items (e.g. food trays, egg cartons).  The Council did add beverage lids to the list of items that need to be marine degradable.

The Council expressed interest in including retail sales and grocery items, but ultimately said the new ordinance isn’t the place for action.  Members instead directed staff to look at prohibition of polystyrene retail sales and come back with recommendations.  They also directed staff to look into possible charges for take-away containers (like the 10-cent charge for single-use plastic bags), and incentives for businesses to move more quickly to sustainable packaging.

The Santa Monica City Council showed great leadership last night by adopting the ordinance and continuing the conversation about how to strengthen it further.  We commend the efforts of city staff and councilmembers and look forward to working with the public to implement and build upon this important action.