Ben Kay, a marine biology teacher at Santa Monica High School and longtime partner of Heal the Bay in the fight against plastic pollution, took a midnight run to Santa Monica’s Pico Kenter stormdrain this morning. Here’s his alarming report about the effect the season’s “Second Flush” had on our local shoreline:

Sorry, had to share another shocking video from my midnight run today: copious plastic pollution and mystery foam strike again. With much more rain, the second flush of the stormdrains this early morning turned out to be much worse than the first flush back on Oct. 9., spraying debris all along the beach. The sad thing is that this is totally preventable, yet my students and I have documented the same phenomenon six years in a row.

Unmistakable negative human impacts to oceanic and land habitats stem from our increasing reliance on disposable plastic goods. Each flush of Santa Monica’s Pico Kenter Storm Drain exacerbates the problem. Even in our affluent, progressive, and green-minded community of Santa Monica, a thick stream of plastic pollutants flows unfiltered into the sea, and nothing meaningful has been done to systematically combat this crisis in my eight years of examining the issue with students.

We clearly have both a litter problem and a plastic packaging problem, not just the former. Real solutions include:

If this report bothers you, consider joining our emergency Storm Response Team, a hardy group of volunteers that removes debris from our most impacted beaches following heavy rainfall. 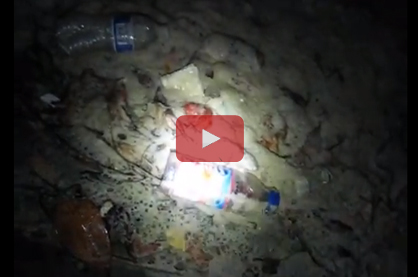 ← Our Cleanup Volunteers Break a Record