Some Truly Groundbreaking News From Malibu

June 29, 2016 — Heal the Bay celebrates a concrete win in the decades-long fight to clean up polluted beaches in Malibu.

Malibu is one of the most breathtaking and desirable places to live in Southern California, but it has a dirty little secret – septic systems in and around its cultural center have fouled nearby coastal waters for decades.

Malibu Creek, Malibu Lagoon, and the surrounding ocean, including Surfrider Beach, are critically polluted and numerous studies point to septic systems as a major contributor. Swimmers who recreate in these waters run the risk of all kinds of illnesses.

But today Heal the Bay staff and members celebrated an important milestone in what has been a long and protracted fight to reduce water pollution in Malibu – groundbreaking on a Civic Wastewater Treatment Facility.

For more than 15 years, Heal the Bay has called for the Malibu Civic Center’s septic systems to be replaced by a centralized wastewater treatment facility. It has been a long and bumpy road, with officials complaining about costs and some residents worried about the specter of development if sewers are put in. But our advocacy is finally starting to yield tangible results.

The Los Angeles Regional Water Quality Control Board adopted a Septic Prohibition in 2009 that required the phasing out by 2019 of all septic systems in the Malibu Civic Center Area (think Malibu Pier, Pepperdine, Malibu Bluffs Park). And in 2015 the Malibu City Council unanimously certified the Civic Center Wastewater Treatment Facility Final Environmental Impact Report and later secured funding for the facility.

Malibu City Councilmembers, along with members of the California State and Regional Water Control Board, were all in attendance today to put golden shovel to dirt.

“The facility will enable Malibu to protect the natural environment that we cherish, while meeting state mandates to end the use of septic systems in the Civic Center area and producing recycled water to reduce Malibu’s reliance on potable water,” said Laura Rosenthal, Malibu’s current mayor. 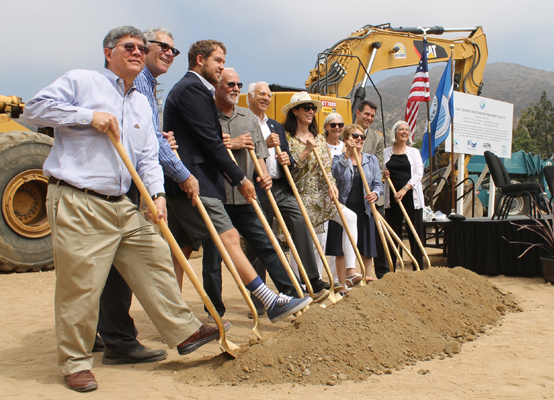 It was especially gratifying to see Mark Gold, past Heal the Bay president and current board member, in attendance. Amid often fierce opposition from city officials and some Malibu property owners, Gold led the charge to demand an end to septic tanks in the Civic Center area for many years. He helped broker an MOU between the city and the regional water board that phased out septic tanks and mandated the building of a more modern treatment facility. (You can read more about his war wounds in one of his blog posts here.)

While today’s groundbreaking is a big step, the journey to better water quality is far from complete. Septic tanks are still in the process of being phased out and water quality in Malibu Creek, Malibu Lagoon, and local beaches isn’t likely to show improvement until the facility actually begins to treat local wastewater.

The wastewater treatment site is located at the intersection of Civic Center Way and Vista Pacifica. The facility will treat wastewater from properties in and around the Civic Center, and use the recycled water produced by the facility for irrigation of local parks and landscaping.

As the construction advances, we promise to remain vigilant and keep you updated.