July 7, 2016 — Over the last ten months, citizen scientists of all ages helped our Santa Monica Pier Aquarium survey the humble Pacific Mole Crab (commonly known as the sand crab). More than 60 volunteers collected an immense amount of data about these sand crabs on the beach just outside the Aquarium’s doors – what did they learn?

Last year the Aquarium partnered with the Long-term Monitoring Program and Experiential Training for Students (LiMPETS). This statewide program activates people along the entire California coast to do real science through hands-on data collection – at the Santa Monica Pier we focused entirely on sand crabs, an indicator species useful for measuring the health of the entire ecosystem. We observed how rainfall, water temperature and tides affected the size, sex and abundance of sand crabs.

After consistently collecting data for almost a year we are beginning to see some trends. What is most exciting is the sheer number of sand crabs we’ve been seeing lately. In the winter, if we found two sand crabs we knew it was a good day. Now we’re consistently finding 15-25! What’s behind this drastic change? 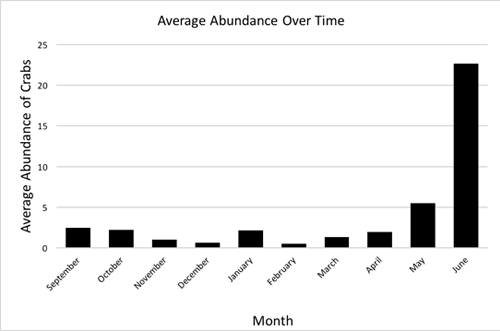 The answer has to do with the sand crab’s life cycle. Adult sand crabs have a mating season between November and February. Their eggs develop for 30 days, before hatching into planktonic larvae. These larvae float around in the ocean for a little over four months and go through six different life stages (which ensures that they become widely dispersed and colonize new areas)! They eventually settle onto shore as juveniles, or “recruits,” and about a month later become fully grown adults. This explains why we are currently finding so many sand crabs, especially many of the recruits that were laid in the early months of mating season, drifted as plankton for months, and have now made the Santa Monica beach their home. As they continue to feed and grow, they will soon start the process all over again.

So if you joined on a sand crab survey trek in the winter, be sure to come back and help us find, count, and measure all of the sand crabs we have been finding on the Santa Monica beach!

Taylor Spesak is the Aquarium’s public programs educator. Join him every Wednesday at 3pm for sand crab monitoring. The program is included with Aquarium admission.

← Some Truly Groundbreaking News From Malibu