Stand Up Against Neighborhood Drilling in LA 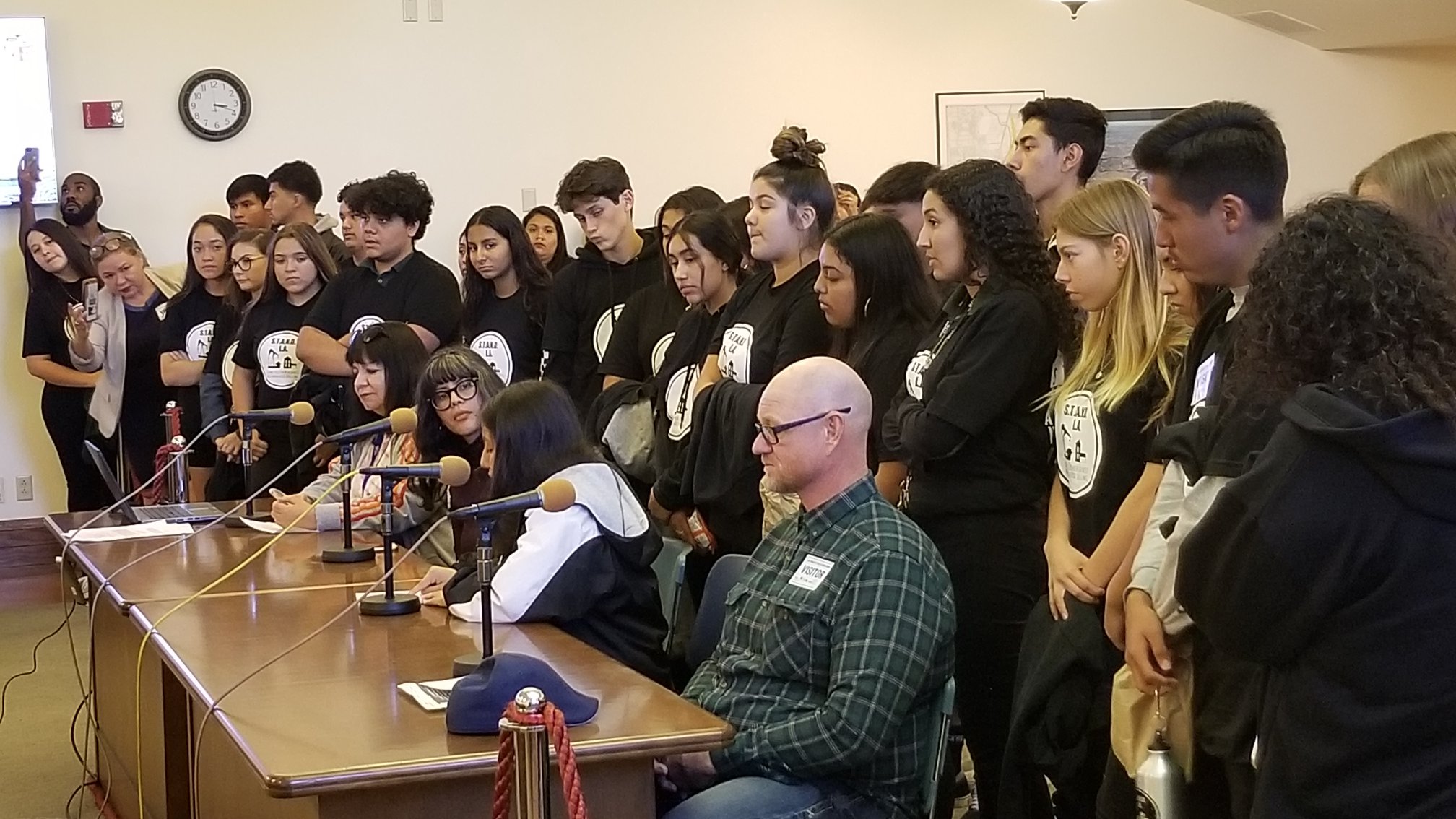 Meredith McCarthy, Operations Director at Heal the Bay, highlights the STAND-L.A. coalition and why the City of LA must take action now to protect public health and the environment, including investing in good green jobs, protecting our children’s health, buffering communities and phasing out fossil fuels.

The STAND-L.A. coalition is urging Los Angeles City Hall to take action by implementing public health protection measures, including a 2,500-foot setback between active oil wells and sensitive land uses, such as homes, schools, places of work and medical facilities. The coalition, led by Physicians for Social Responsibility and Communities for a Better Environment, seeks to phase out neighborhood drilling in order to protect the health and safety of Angelenos on the front lines of oil extraction. Low-income neighborhoods are exposed to disproportionate health and safety risks due to a history of abundant drilling within close proximity to where residents live, work and go about daily life.

Heal the Bay proudly stands in solidarity with STAND-L.A. Oil extraction is simply incompatible with healthy neighborhoods, thriving oceans and a sustainable future for our planet.

We know firsthand that fighting Big Oil is a heavy lift. Years ago, Heal the Bay helped lead a coalition that defeated a slant drilling oil project under the sea in Hermosa Beach. Now, we cannot sit back satisfied that we prevented an oil rig in the ocean only to see it turn up in a neighborhood.

We joined the STAND-L.A. coalition at City Hall on Tuesday, October 15 for the Energy, Climate Change, and Environmental Justice Committee hearing. The Committee reviewed the City’s Petroleum Administrator’s feasibility report on the proposed setbacks between oil sites and sensitive land uses. The report suggested a 600-foot setback for existing oil and gas wells and a 1,500-foot setback for new wells. Coalition members argued this doesn’t go far enough, and rightly so. 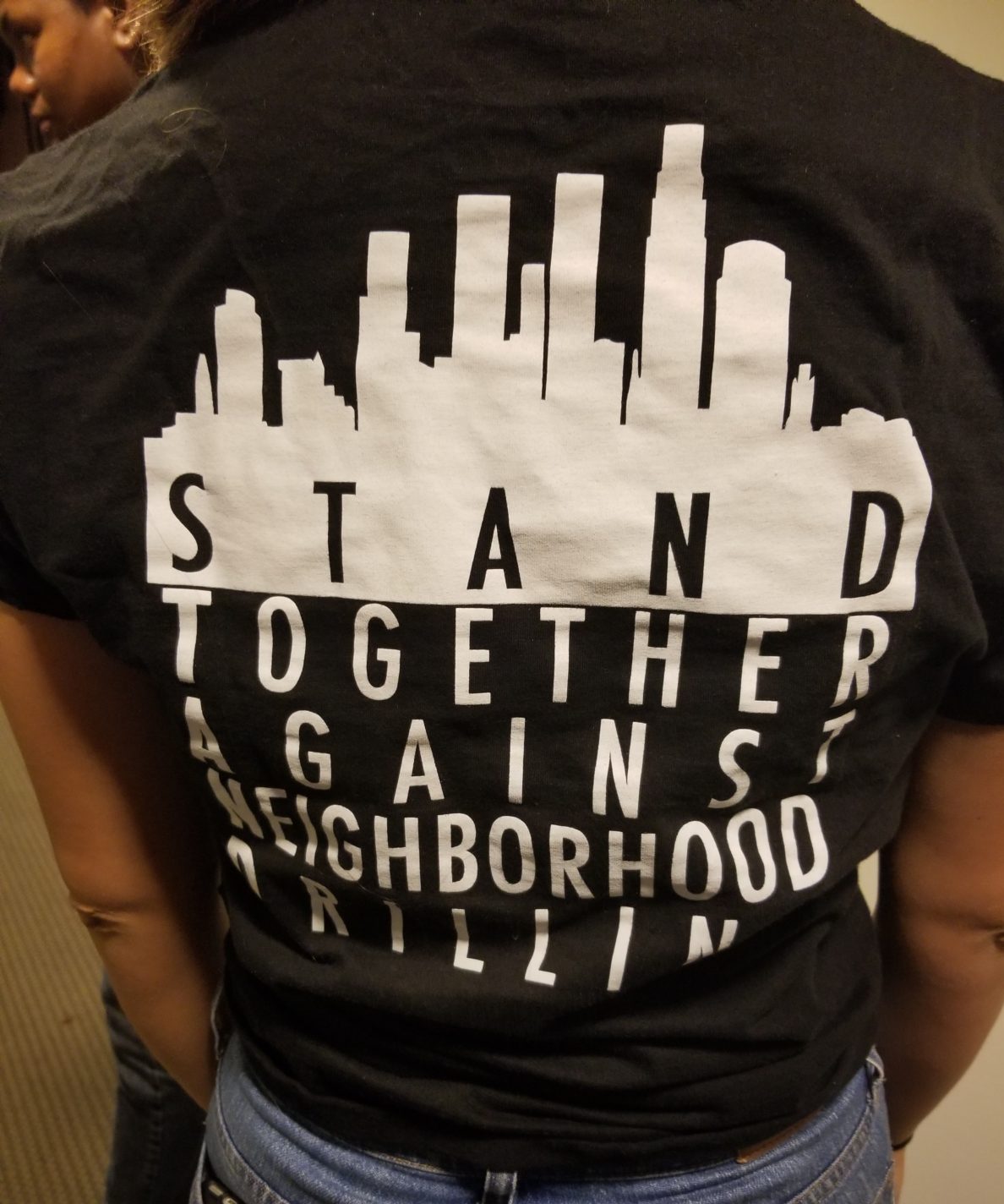 Having lived through many environmental policy campaigns—where industries claimed that our economy would collapse and jobs would be lost if we banned plastic bags, cleaned up stormwater or prevented sewage from dumping into the Bay—I expected a similar argument to justify continuing to drill. So I was not surprised as I listened to testimony at City Hall that the pressing issue of drilling in our neighborhoods, once again, was being framed as a binary debate between “good jobs” versus “healthy neighborhoods”.

The coalition argued that this foolish debate will never be won by prioritizing one issue over the other. Environmental and public health risks won’t be solved either. We can only make progress by thinking about the issue holistically – investing in good green jobs now weans us off our harmful addiction to oil. Protecting our children’s health now leads to a more equitable future. Buffering communities now builds a more resilient LA. Phasing out fossil fuels now creates new job and economic opportunities… and not to mention a more sustainable planet that’s facing increasingly severe impacts from climate change.

Time and time again, Los Angeles has made bold moves to protect public and environmental health. But, what happens when cities can’t afford to buy a healthy environment from oil drilling lease holders to protect its residents, or worse, cities choose to ignore the damage being done? This is the question that the City of LA is grappling with. Will we invest in long-term sustainability or will city leaders be tempted by temporary job gains and the promise of future revenue?

It’s important to make the connection to plastics here, too. What do plastics and fossil fuels have in common, you ask? The plastics industry uses as much oil as aviation. So when we think about oil drilling in neighborhoods, we must also think about why we are drilling there in the first place.

The more cheap energy and cheap plastic material we use, the more waste we generate and the greater the environmental costs. The search for profit has turned a blind eye to the burdens and costs of poor air and water quality that low-resourced neighborhoods must carry.

Plastics use is expected to quadruple by 2050. In 30 years, the weight of plastics is likely to outweigh that of fish in our ocean. Plastic waste is already having a profound impact on oceans and marine life. It is found inside animals throughout the ocean food chain, from mussels to sea turtles to whales, and is likely to end up in the human food chain. These are the conclusions from a new report released at Davos by the World Economics Forum, the Ellen MacArthur Foundation and consultancy firm McKinsey.

Environmental costs translate directly into economic costs. We can’t afford inaction and we can’t ignore the negative impacts on our communities, from blight to toxic air.

Please take a second to call or email your City Council representative and demand good jobs AND a healthy neighborhood. Insist that our region start working toward not just a new economy, but a new generative economy. A journey of a thousand miles begins with a single step and a 2,500-foot setback.

← Add Your Voice to the Safe, Clean Water Program

A Summer of Freshwater Sampling in LA →