H is for Humanity

Along the L.A. River, Heal the Bay’s communications director Matthew King comes face to face with our civic shame – our growing homeless population. Fortunately, a solution is at hand on the March 7th ballot in L.A. County: Measure H. #YesOnH

A stocky Latino man rubs the sleep from his eyes. Yawning deeply, he stretches and greets the dawn. Bending over his sink in central Los Angeles, he rubs water through his thick, coal-black hair. He brushes his teeth, gargling loudly as he rinses. He slips into black polyester pants and a starchy white shirt. Jumping onto a beat-up mountain bike, he wobbles off to work.

A ritual like this occurs in thousands of bathrooms each morning, as Los Angeles’ working class comes to life. But this scene unfolded before me in a much more disturbing spot – along the concrete bank of the Los Angeles River, below the intersection of the 5 and 110 freeways.

The man – one of L.A. County’s nearly 50,000 homeless individuals – had turned to the river for basic sanitation. The channelized waterway served as his sink, his latrine.

I watched all this last year, during a live TV news segment I arranged to promote Heal the Bay’s river cleanups. We had arrived at the underpass in darkness, but as morning broke I noticed makeshift shelters wedged between the freeway and the river embankments. A maze of tarp-and-plywood structures resembled a favela in Rio.

A small group of homeless men came to life at first light, scuttling down to the river, like crabs emerging from rocky crevices. After the initial shock, the sight stirred fear, disbelief, and then shame.

Working in the water-quality arena, I wanted to warn the men about washing in the bacteria-filled river. But an uneasy feeling of privilege and futility swept over me. I stayed quiet. It was clear: They simply had no other place to bathe.

Welcome to L.A. – the homeless capital of the United States. Clinging underneath highways, sleeping in underbrush, passed out on doorsteps, roaming parks and beaches, these largely forgotten souls haunt our public spaces and our civic conscience. 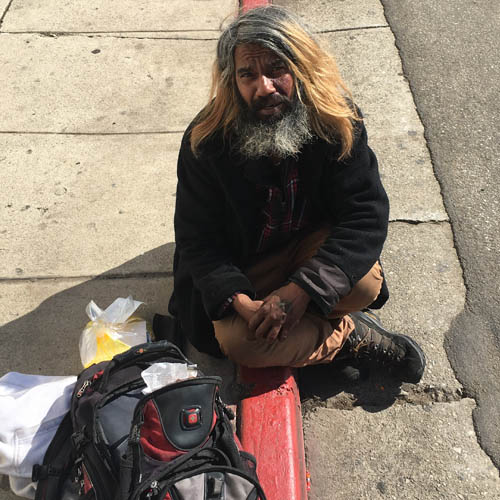 The face of homelessness in Santa Monica. Photo taken by permission.

The river camp is at odds with assumptions many hold about the homeless. Colleagues at fellow nonprofit Chrysalis tell me that many homeless individuals are employed. While some people living on the street are mentally ill or drug addicted, most are not. And most would willingly move into permanent housing if Los Angeles had enough resources to serve those in need.

And while many live in the shadows, most homeless hide in plain sight.

On the loading dock of our Santa Monica offices, I frequently see the destitute setting up for the night on cardboard pallets. In the morning, they’re gone, leaving behind a depressing wake of cigarette butts and human waste. During my lunch break, I’ve stepped around bedraggled people sleeping in the middle of a bustling sidewalk. I often hear the terrifying shriek of homeless schizophrenics from my office, shouting senseless profanities to no one and everyone. 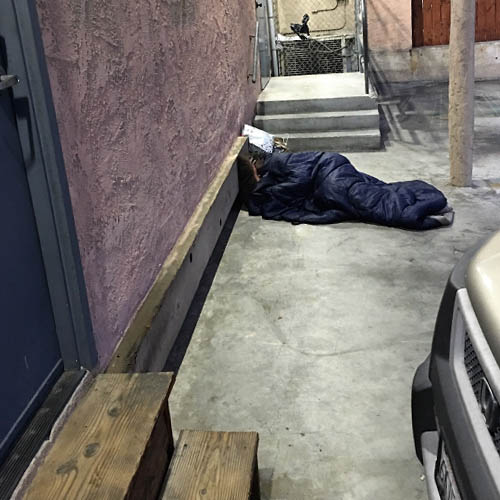 The loading dock at Heal the Bay’s offices. Photo taken by permission.

I’ve become calloused to these sights and sounds. Many Angelenos also feel numbed by habituation and helplessness. But the crisis is growing, with a nearly 20% increase in homelessness in L.A. County over the past three years. L.A.’s Skid Row continues to fester into a national disgrace. Did you know Skid Row only represents about 10% of the homeless population in L.A. County? As an L.A. local or tourist will tell you, homelessness is everywhere in L.A. County from San Pedro to San Fernando Valley, and, from Venice Beach to Griffith Park. 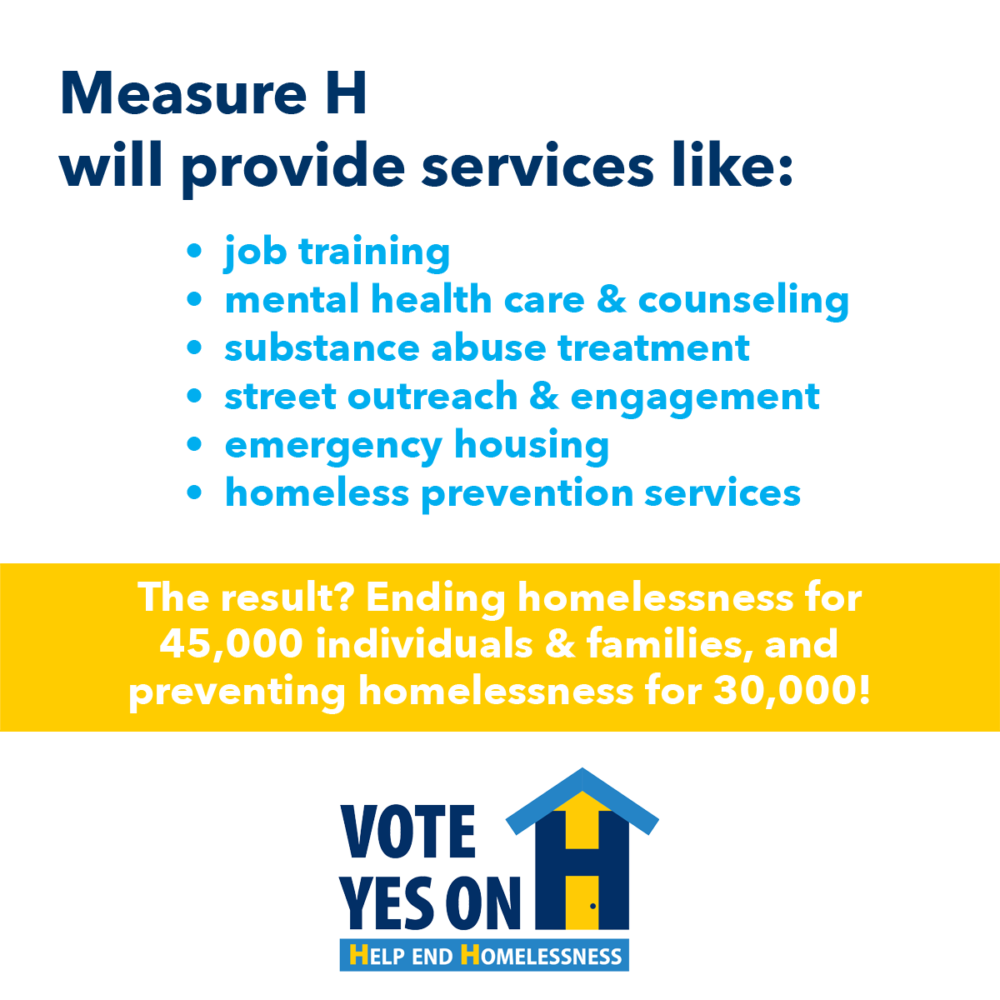 Unlike previous fragmented initiatives, Measure H is driven by 47 specific recommendations housed in an integrated, cross-departmental plan. The county’s housing, public health and mental health units are unified in a manner atypical of the county’s often byzantine bureaucracy. Instead of just dangling keys, this 10-year campaign offers comprehensive services and support to get the destitute off the street. A citizens committee will perform annual audits to ensure money is spent wisely and real-world results are achieved.

Yes, there’s concern about taxpayer fatigue, with Angelenos recently voting to support separate transportation and open-space initiatives via Measure M and Measure A.

Trains and parks are critical, but now it’s time to invest in people.

A spirit of resolve is palpable among the community and business groups supporting the initiative, which includes Heal the Bay. I felt it in the packed, cheering room when the Board of Supervisors unanimously approved the ballot measure late last year. A wide swath of the county’s elite, from LACMA chief Michael Govan to billionaire philanthropist Eli Broad, voiced their support.

Homelessness is foremost a moral issue for Heal the Bay. To be clear, water quality suffers in our ocean and rivers when the homeless lack access to basic sanitation. But our focus is ensuring basic human dignity and access to clean water for all.

Now is the time for everyday citizens to uplift our region’s most vulnerable populations. We can’t wait any longer. It’s easy to get lost in the alphabet soup of initiatives on crowded ballots. But this measure is easy to remember and hard to ignore – H is for humanity.

Measure H can only be implemented if enough people vote Yes on the March 7th ballot.

Will you help us make waves by spreading the word about #YesOnH? It’s simple:

How You Can Help A Weakened US EPA →

2,735 volunteers joined us on Saturday, Sept. 18 at 35 beach, river & inland sites in Los Angeles County, California for our 32nd Annual #CoastalCleanupDay. From 9 am til Noon, volunteers covered 50+ miles of area on land & underwater—removing 5,051 pounds of trash & 156 pounds of recyclables!

THANK YOU VOLUNTEERS, DONORS AND PARTNERS FOR MAKING COASTAL CLEANUP MONTH A BIG SUCCESS SO FAR!

Make a donation to Heal the Bay and now through September 30 your donation will be matched 100% up to $20,000 thanks to generous Heal the Bay Board Members.