Yes On W in L.A.: Some True Grass-Roots Marketing

All political ads and posts are paid for by Heal the Bay and L.A. Waterkeeper.

It hasn’t been easy rallying the electorate for Measure W, the countywide initiative to raise $300 million for increased stormwater capture in greater L.A. Voters will decide on the measure on Tuesday.

Building a lattice of nature-based facilities across the Southland could reap billions of gallons of runoff for reuse each year. Engineers think they can harvest enough runoff to meet the water needs of 2.5 million Angelenos. That’s about a quarter of L.A. County’s population.

It’s a critical first step in ditching our outdated Mulholland-era system of water management, in which we import 70% of our water and then send much of it uselessly to the sea each day.

But let’s face it, most voters tune out when you mention the word stormwater. Infrastructure isn’t sexy.

And Heal the Bay can’t compete with industry lobbyists who spend millions to jam airwaves with ads for narrowly focused initiatives. (Is paying for dialysis really the most pressing  issue in California today?)

So what’s an earnest nonprofit to do when it wants to cut through all the clutter? 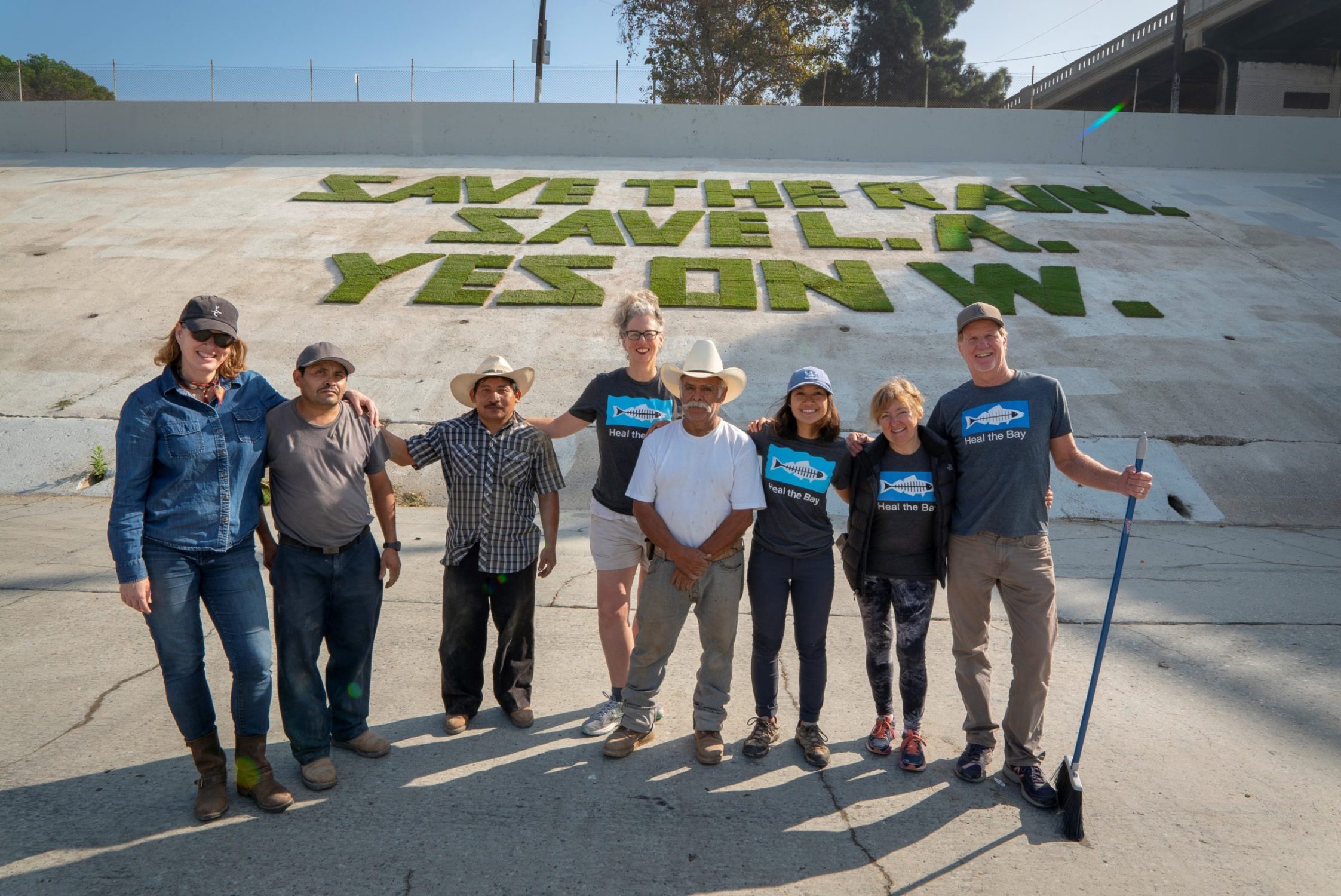 Heal the Bay has tapped an amazing cadre of talent over the years at L.A.’s leading advertising, marketing, communications and design companies. With hat in hand, we’ve wheedled great work out of great minds. (Did you know that Chiat Day designed our now famous fishbones logo for free?)

Our strategy has been to find the surfers at an agency. It’s not hard to do – why do you think there are so many aspirational commercials these days of bearded hipsters loading their boards into their hybrid cars?

So when tasked by a coalition of L.A.’s leading environmental, labor and social justice groups to raise Measure W’s voice amid the mid-term noise, I turned to my neighbor and Bay Street surf buddy – Kevin McCarthy.

A longtime creative director, Kevin is the force behind such Heal the Bay hits as the “Drains to the Ocean” stencils spray-painted across L.A. sidewalks. He and his team also assembled the Jeremy Irons-narrated mockumentary “The Majestic Plastic Bag,” a viral hit that has been seen 2.5 million times and helped spur the statewide ban on single-use bags.

For Measure W, he assembled a creative coalition-of-the-willing to develop “sticky” public engagements, such as a “Haunted Storm Drain” tour during Halloween festivities at our Santa Monica Pier Aquarium and a makeshift “parklet” that popped-up on a busy DTLA street during lunchtime.

But he saved his best trick for last: doing some grass-roots marketing along the L.A. River.

Last month, Kevin sent me a mock-up of a stunt to use live sod to spell out SAVE THE RAIN, SAVE L.A., VOTE YES ON W along the banks of the L.A. River.

The idea is brilliant in its simplicity and audacity. The L.A. River is the poster child for how we waste water. Each day its concrete channels funnel millions of gallons of usable water into the Pacific.

The River is also the perfect canvas for L.A.’s graffiti crews, whose work gets maximum visibility from car and train traffic that goes by its banks. Instead of spray paint, we’d use Mother Nature to spread the word. With our grass graffiti, we’d embody the very spirit of Measure W – turning concrete into green space. The medium would be the message!

Last week we quietly secured the necessary permits from FilmLA, which cut red-tape among the entities that claim jurisdiction over the River.

The installation took place Monday morning near the intersections of the 110 and 5 freeways. The site afford views for morning commuters over nearby bridges, as well as for Metro and Amtrak train riders.

As dawn broke, our stunt crew drove down a hidden driveway onto the river floor and set up camp. As a landscape designer, my wife Erin had secured beds of sod at a discounted rate. Crack landscape contractor Robert Herrera and his crew measured, cut and placed the grass in stencils laid out by Kevin and a few of our staff.

After two hours of hauling the heavy sod up the steep banks, our tired team stood on the edge of the river to examine our handiwork. Passers-by on the trains waved to us, filling us with satisfaction.

While the stunt paid off in real-time, we knew the real dividends would come with media coverage and social-sharing.

I know I’m biased, but the videos are stunning.

Lindsey and Will — a professional and domestic couple — assembled these evocative mini-films. Lindsey works for sister org and sometimes competitor Los Angeles Waterkeeper. She twisted Will’s arm to pitch in during a break from his regular professional work (“Survivor”). It’s been fun to collaborate with such passionate and committed creatives.

One post-script: No grass was harmed in the filming of this movie! My wife found a youth center to pick up the sod letters at the end of the day. The grass has a new home and is being put to good use in a recreational area.

After all, plant-life  – like water – is a terrible thing to waste.

Matthew King serves as communications director for Heal the Bay.

Political Disclosure: Heal the Bay and L.A. Waterkeeper paid for all materials and staff time for installation and filming.