After months of thorough reading, analysis and discussion, Heal the Bay and our fellow Wetlands Coalition members this week submitted formal written comments on the Ballona Wetlands restoration project. Heal the Bay strongly supports Alternative 1, a plan that would reconnect land and sea, create the most wetland habitats and provide ample trails and overlooks for all to use.

You might remember that back in September, the state Department of Fish & Wildlife and the U.S. Army Corps of Engineers released much anticipated (and long delayed) plans for the restoration of the beleaguered Ballona Wetlands, the nearly 600-acre ecological reserve near Playa del Rey.

The Ballona Wetlands are the largest remaining wetlands in L.A. County and have suffered decades of neglect and abuse. The restoration plans presented three options (along with a no-project or do-nothing alternative) to improve the damaged and degraded wetlands.

The restoration proposals focus on a few major desired outcomes: reconnecting the wetlands to the sea, enhancing habitat for wildlife and creating more public access.

To do this, the options ranged from taking out nearly all concrete channels from the reserve and removing millions of cubic yards of dumped fill (related to the building of nearby Marina del Rey decades ago), to leaving concrete flood channels in place and making smaller changes.

When the agencies released the draft Environmental Impact Report/Study, interested stakeholders and the public had 60 days to review the plans and submit comments on them in writing and in person at a Nov. 8 public hearing.  The lead agencies wisely extended the review period to Feb. 5. The move gave the public more time to understand and digest the lengthy and technical document, which provided a thorough, science-based analysis of current conditions and potential projects.

So, that brings us to this past Monday when the public comment period ended and we hit the send button, crystallizing months of hard work in a single moment.

Heal the Bay enthusiastically supports Alternative 1, the option that best achieves the goals set forth by the state of California, which include among others: 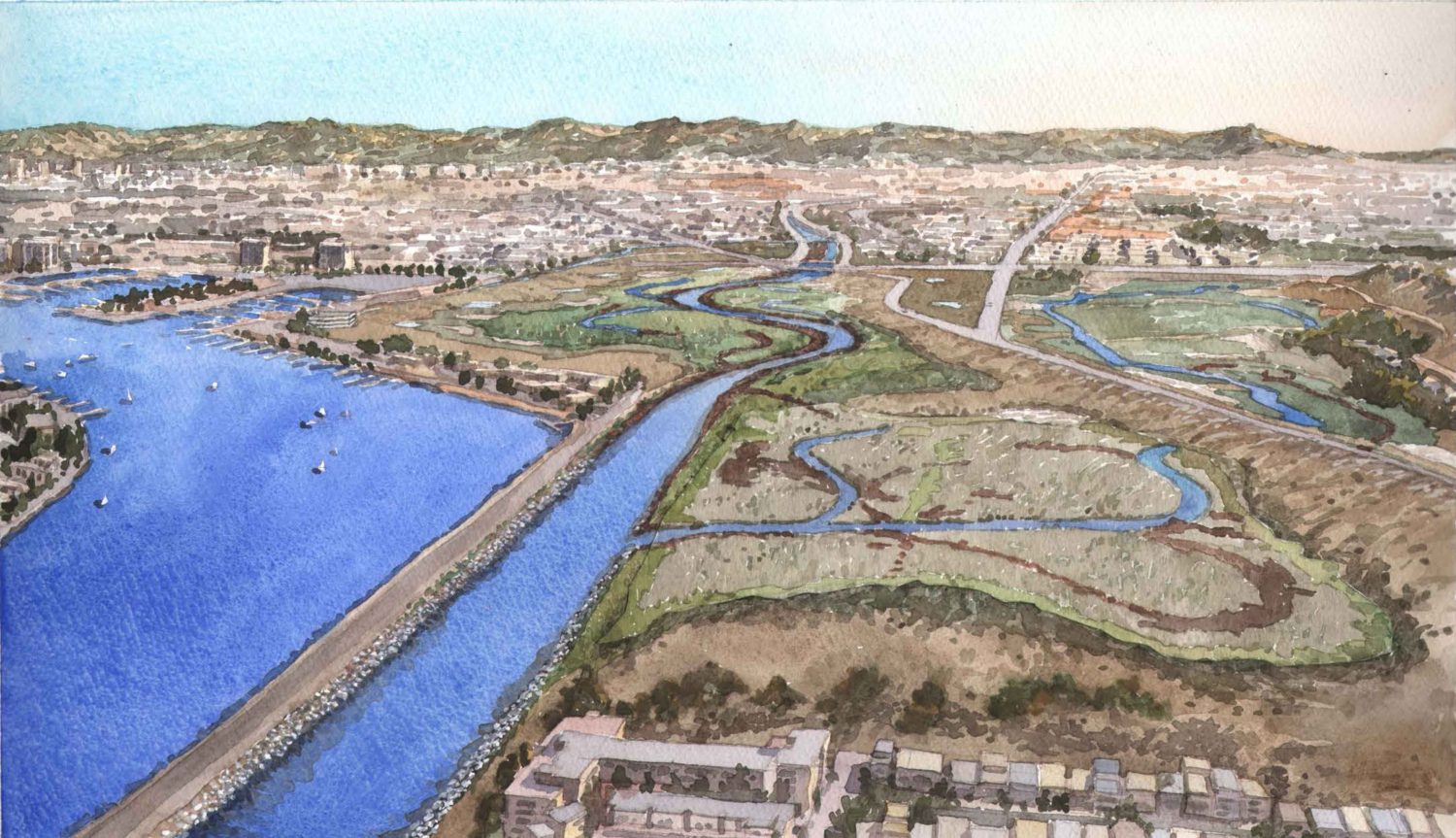 Source: ballonarestoration.org – This Alternative 1 rendering may not be representative of the final plans.

Alternative 1 best addresses the degradation that the Wetlands have suffered by removing the most fill, removing the most concrete along Ballona Creek, and by restoring, creating, and enhancing the greatest amount of tidal salt marsh habitat.

Alternative 1 is composed of two phases. The first phase will create a naturalized creek. The second phase establishes even more natural tidal flow and connections between the land and sea. These proposed restoration activities will result in wetlands that are the most self-sustaining and require the least amount of on-going maintenance, providing benefits for wildlife and people.

We submitted comments individually and also with our Coalition Steering Committee (made up of Friends of Ballona Wetlands, L.A. Waterkeeper, Surfrider Foundation South Bay Chapter, and the Trust for Public Land).

Our Coalition Steering Committee came to a consensus to support Phase 1 of this plan with some modifications. The group wants to see that the state-endangered Belding’s savannah sparrow bird is protected, that public access paths be increased in certain areas and restricted in sensitive areas, and that additional information about proposed parking lots be included in the final document.

We came to this consensus through many meetings filled with hard work, technical analysis, and long discussions over the last four months. It was not always easy and we didn’t agree on every small detail but our overarching positions were always aligned. We followed our nine Principles of Wetland Restoration, which prioritize ecosystem function, scientific basis, resiliency, appropriate scale, and ecological balance.

Heal the Bay and L.A. Waterkeeper also supported Phase 2 of Alternative 1, which removes more concrete and tide gates along the Creek.

Now, the lead agencies have the task of reviewing and responding to all the comments they have received. The comments and responses will be made public through the Final EIR/S, which we hope to see within a year’s time.

The Final EIR/S will have a chosen Alternative and at that point, funding and permits can be obtained and the project can get started at long last. We still have a lot of work ahead of us and we are committed to advocating and fighting for the robust restoration of Ballona Wetlands so they are healthy, functioning and open to all Angelenos.

THANK YOU to all who joined us AND our partners at the Ballona Wetlands over the last four months and who have engaged and advocated for the restoration of this unique and precious resource. Stay tuned for ways to get involved and ensure that the wetlands get the help they need.