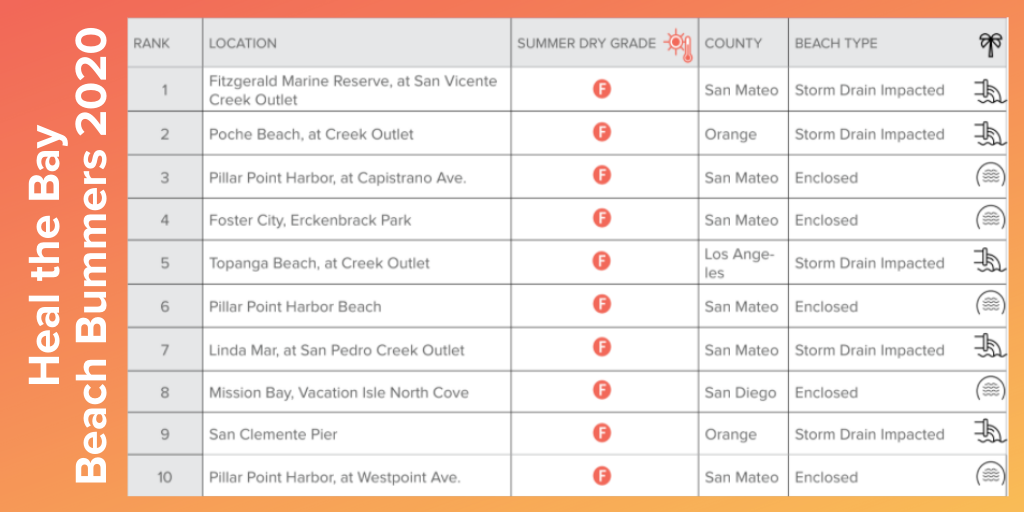 Every year, Heal the Bay staff scientists assign A-to-F letter grades to beaches all along the California coast. These grades are based on bacteria pollution and help inform public health. This year, 92% of 500 California beaches received an A or B grade for the busy summer season. However, several beaches are on our list of no-goes.

We’re announcing our 2019-2020 Beach Bummers List, a ranking of the ten most polluted beaches in the state based on levels of harmful bacteria. This year, six of the ten Beach Bummers are from San Mateo County and the remaining four are in Southern California.

For a detailed look at beach results by location, why some beaches are more vulnerable to higher levels of pollution, and more information about the Beach Bummers (pages 16-18), refer to our complete annual Beach Report Card 2019-20.

Polluted ocean waters are a significant health risk to beachgoers. We encourage all beachgoers to check the Beach Report Card when planning a trip to the ocean! Because a day at the beach shouldn’t make anyone sick.

Coming into contact with beach water that has a grade of C or lower greatly increases the risk of contracting illnesses such as stomach flu, ear infections, upper respiratory infections, and rashes.