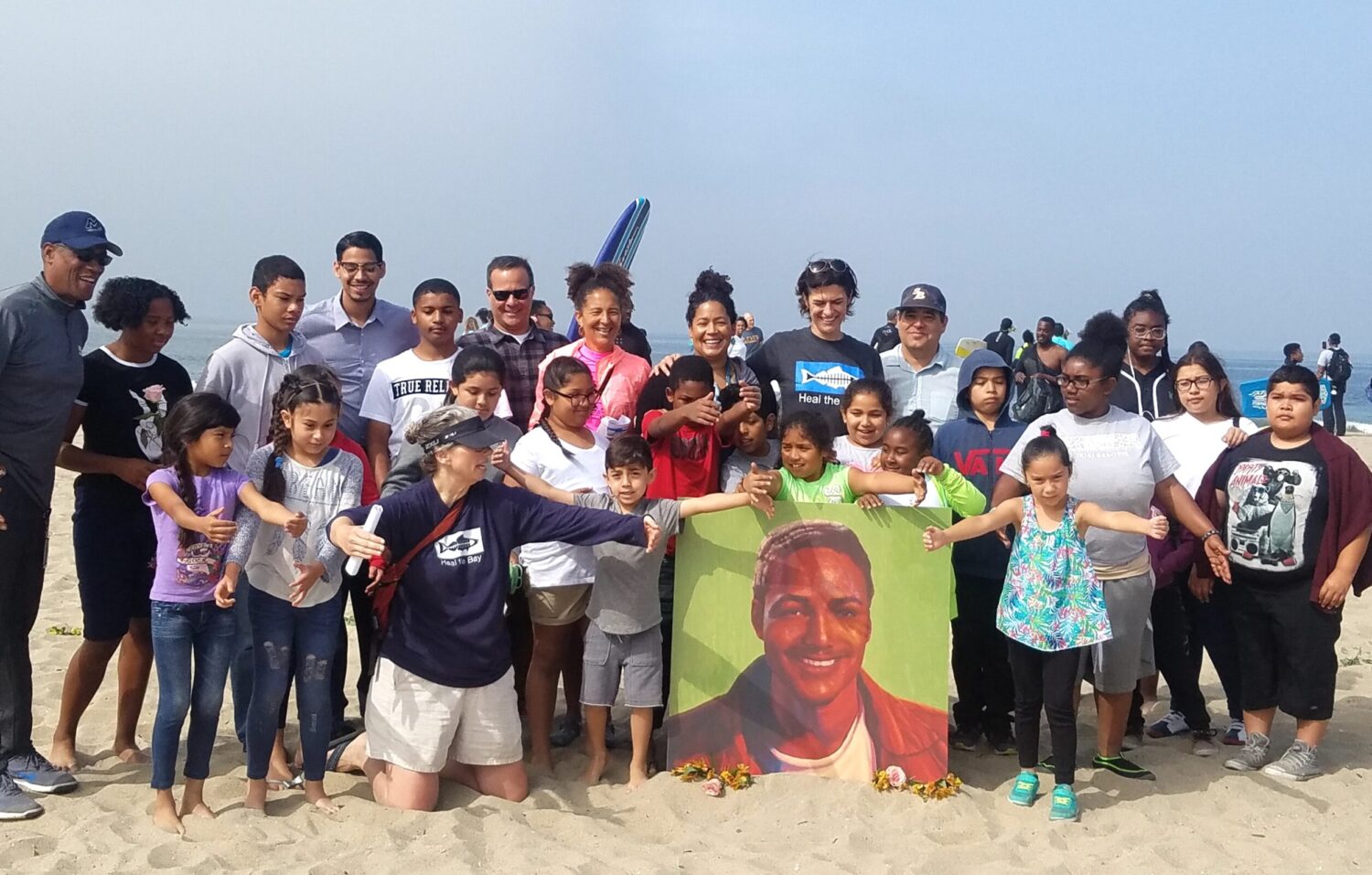 Join the celebration to honor Nick Gabaldón and his legacy as the quintessential California surfer.

Nick Gabaldón Day introduces communities across Los Angeles County to the magic of the coast through free surf and ocean safety lessons, beach ecology exploration, and a history lesson about an individual who followed his passion against all odds.

As a result of the COVID-19 response, this year we partnered with World Surf League and the California Coastal Conservancy to create a virtual Nick Gabaldón Day with a series of online panels to dive deeper into past and current issues of justice, equity, and access on our coast.

The recent civil unrest has laid bare the desperate need to address racism and racial injustice across all sectors. Our coast is no exception. Let’s dive into some local history and why we honor Nick Gabaldón’s legacy as an early surfer of color in Los Angeles.

Who was Nick Gabaldón?

Nick Gabaldón (1927-1951) was a pioneering surfer of African American and Mexican American descent. He was a Santa Monica local and the first documented surfer of color in the Santa Monica Bay. As an accomplished board rider, he smashed stereotypes surfing the Bay during the 1940s and 50s. Gabaldón would sometimes paddle 12 miles from Santa Monica to the fabled break at Malibu. The grueling trip showed true commitment and passion for ocean sports. Tragically, Gabaldón would lose his life during a huge swell at Surfrider Beach in 1951, crashing into the pilings as he tried to pull off a dangerous maneuver called “shooting the pier”.

Gabaldón reminds us of a time when beaches suffered from de facto segregation. The shoreline and waters at Bay Street Beach in Santa Monica were an active hub of African American beach life during the Jim Crow era. This beach was popular in the 1900s to early 1960s among African Americans, who sought to avoid hostile and racial discrimination they might experience at other southland beaches. Racial discrimination and restrictive covenants prevented African Americans from buying property throughout the Los Angeles region, but the community’s presence and agency sustained their oceanfront usage in Santa Monica.

Gabaldón overcame overt and tacit racism and became a role model for communities of color. Taking his rightful place in a lineup with such legends as Ricky Grigg and Matt Kivlin, Gabaldón helped integrate what largely was an all-white sport. In 2008 the City of Santa Monica officially recognized Bay Street and Nick Gabaldón with a landmark monument at Bay Street and the Oceanfront Walk. Today, Gabaldón is an enduring symbol that our beaches are recreational havens for all people. 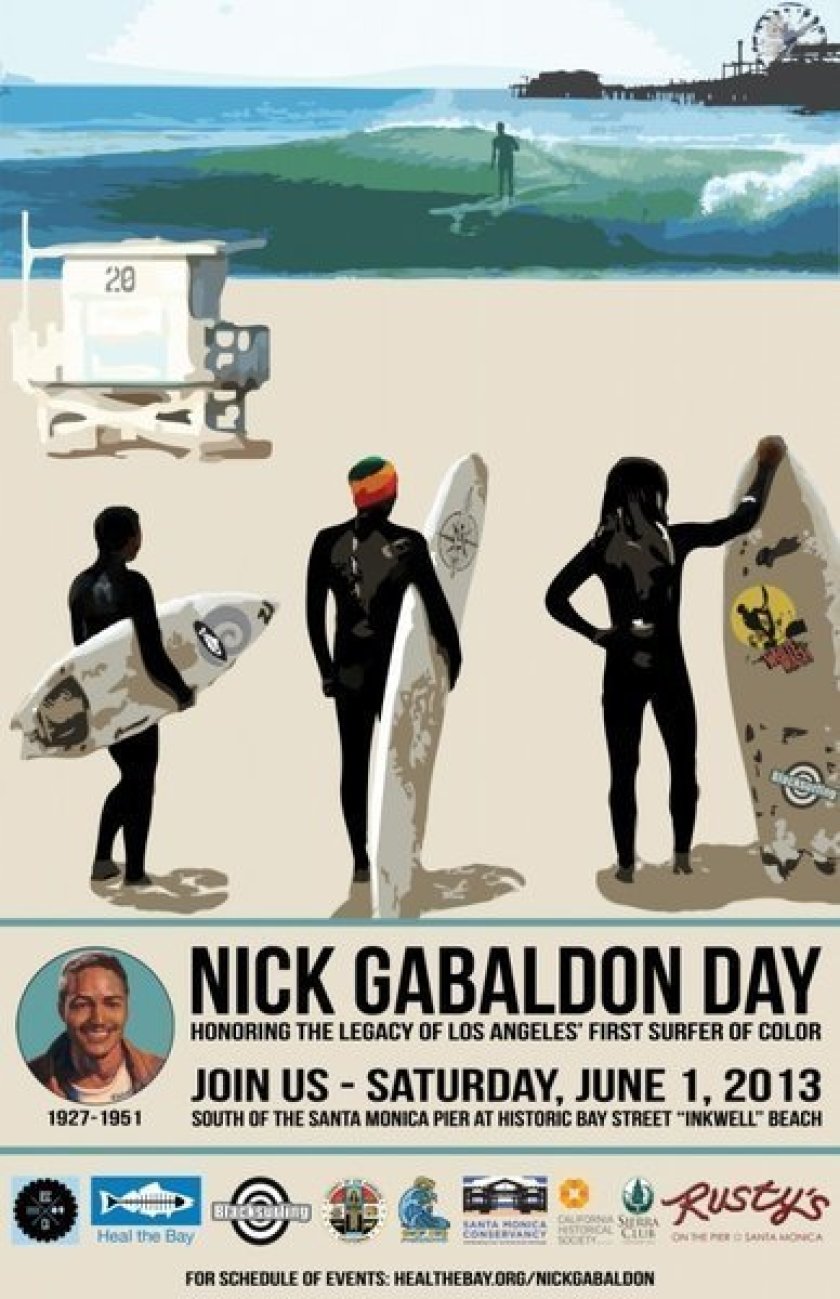 What is Nick Gabaldón Day?

To honor his pioneering spirit, Nick Gabaldón Day is celebrated during the first week of June with community partners, including Heal the Bay, the Black Surfers Collective, the Surf Bus Foundation, and the Santa Monica Conservancy.

In past years, we have hosted nearly 150 African American and Latinx youth from Pacoima to Compton for a day of ocean exploration and cultural reflection at Bay Street Beach. Many youth who particpate are learning to surf for the first time. Usually, we celebrate with a paddle out, free surf lessons, and free Heal the Bay Aquarium admission.

In 2020, World Surf League and the California Coastal Conservancy joined our efforts as well.

What was “The Ink Well”?

“The Ink Well” is a derogatory name that was used for a stretch of beachfront near Bay Street and Ocean Avenue in Santa Monica, which was a safe haven for African American beach-lovers during the Jim Crow era. This area became a sanctuary of sorts for Gabaldón. He learned to surf at the gentle beach break about a half mile south of the Santa Monica Pier. 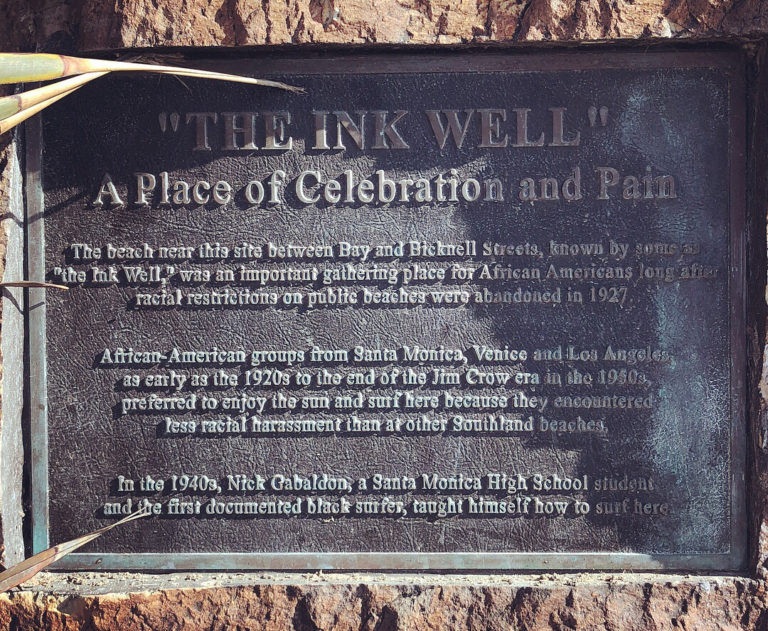 How can I support?

Please consider making a donation to these organizations creating opportunities to advance equity:

Save the Date: Nick Gabaldón Day 2021

The Black Surfers Collective, Heal the Bay, Surf Bus Foundation, Santa Monica Conservancy, and more organizations will be back for the next Nick Gabaldón Day on October 9, 2021. Together, our goal is to continue to reach families in underserved communities and help build personal and shared cultural, historical, and nature heritage as well as civic engagement, which makes up the foundation of stewardship for the next generation of leaders. 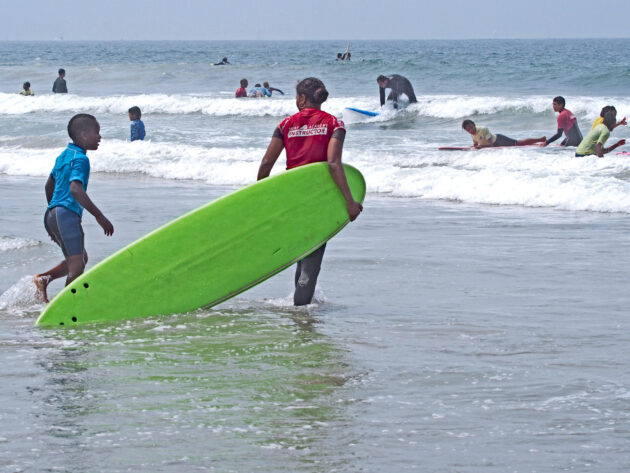 Photos from past #NickGabaldónDay events

#tbt to Nick Gabaldón Day – a celebration every June for the first recorded surfer of African-American and Mexican-American descent in California. Thanks to support this year from @ca_coastal and @cbmla_, Joshua was able to find his first wave!

This lil' gromlette was our youngest surfer today for #NickGabaldonDay in #santamonica! We partnered up with @healthebay and @blacksurferscollective to offer free surf lessons all day long in honor of the first documented surfer of color in LA County.

Tracy Quinn is joining Heal the Bay as our new CEO! Read our press release about why this big news upholds our commitment to science-based advocacy. View a farewell letter from Shelley Luce. Share this news with your networks via LinkedIn, Twitter, Instagram, and Facebook.