Toxic Fish? How to Safely Eat Fish Caught in LA 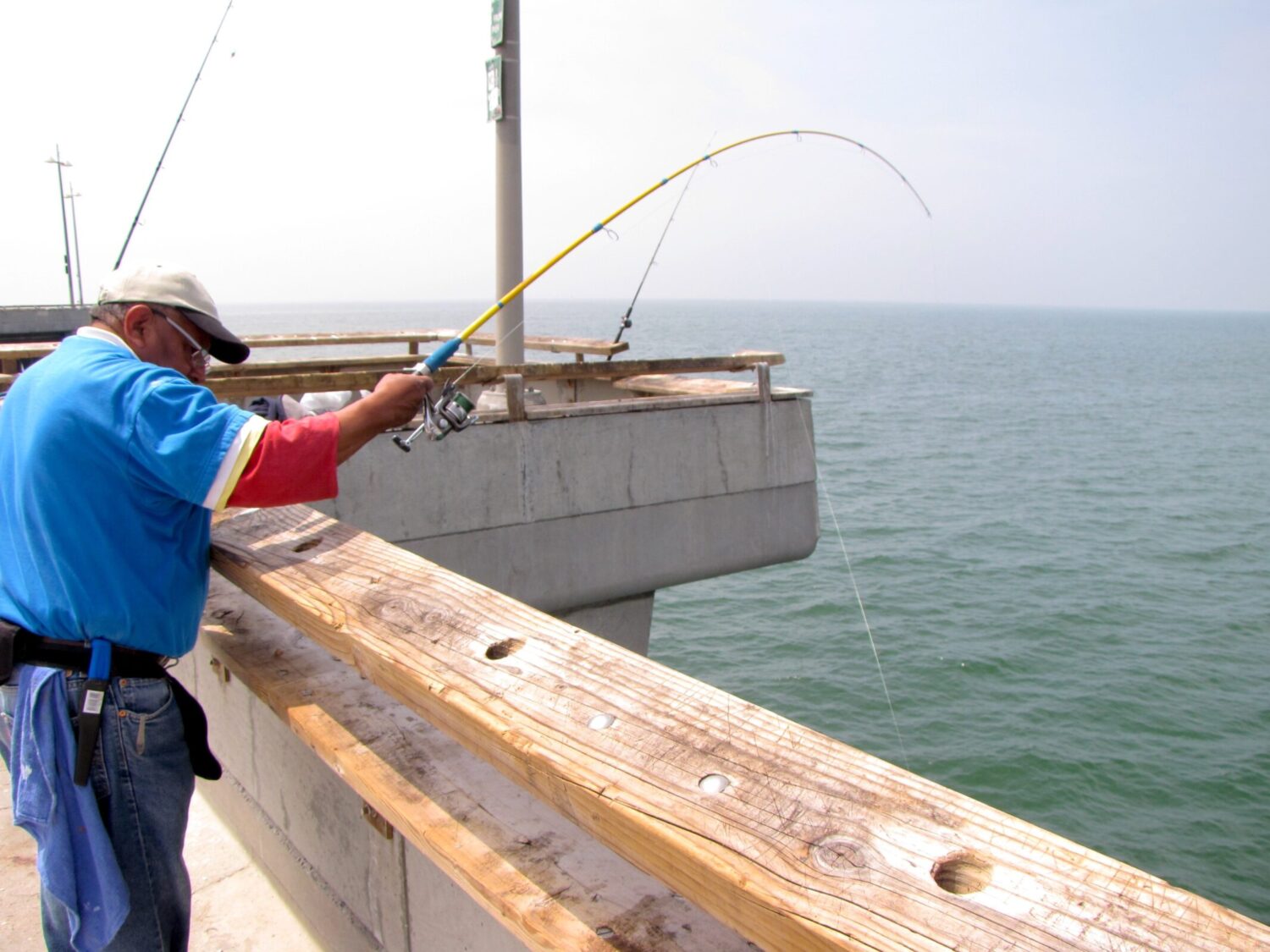 Heal the Bay’s MPA Watch and Outreach Associate, Forest Leigh Curtis, breaks down the science behind pollution bioaccumulation in marine ecosystems, and how local anglers can safely consume fish.

The first time that I was told that the skin of fish caught near Los Angeles could be toxic to eat, the scientist in me was intrigued. Because it is said that fish’s skin can become a “reservoir for toxins,” I wondered if that were additionally true for human skin and I wanted to know what biological mechanisms allowed fish skin to perform this weird function. Perhaps toxins in the water absorb and accumulate in the fish skin? Let’s dive in and investigate.

The toxins in question here are various molecules known as persistent organic pollutants (POPs), which include the chemicals (DDT) and (PCBs). DDT is an industrial pesticide, and is no longer allowed in the US. PCBs can be found in today’s electrical equipment, but used to be very common and found in insulation, coolants, adhesives, ink, pesticides, and other products. POPs are known for their long-term resistance to decomposition, also known as persistence, as well as their organic nature that allows them to accumulate in the bodies of plants and animals.

There are many well-documented health and cultural benefits for eating fish, and POPs do not prevent locally–caught fish from being beneficial, but their presence means that local anglers need to be mindful with the types of fish they eat and how they prepare them. Los Angeles is home to many subsistence anglers who rely on fishing for their main source of protein, and these communities are the most vulnerable to POPs. 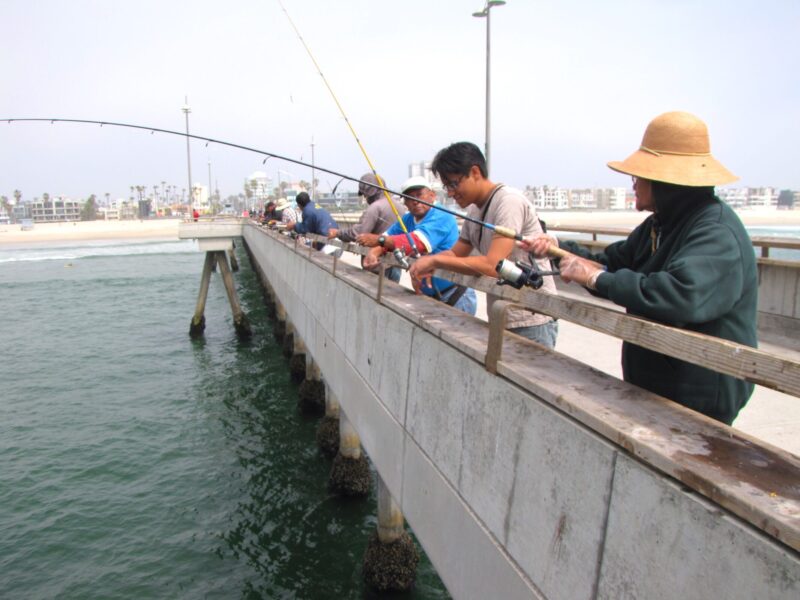 It is unfair to ask anglers to change their behavior to protect themselves from pollution that they had no part in creating, and this is a direct example of an environmental justice issue. Where pollution goes is a calculated decision corporations and lawmakers make, and those decision-makers are fully aware of the impacts of those decisions. While POPs are a global concern, it is clear that the majority of public health impacts from this pollution, including cancer and reproductive disorders, are disproportionately experienced by frontline communities, which are comprised largely of BIPOC and people of lower socio-economic status.

So, how did these pollutants get in the environment in the first place?

POPs are a result of local contamination of LA’s sediment, soil, and groundwater. The largest example in LA County was caused by the Montrose Chemical Corporation, near Torrance. From the 1940s to the 1970s, this factory manufactured DDT and disposed of its waste, including DDT and PCBs, into the sewer system for 28 years, which at the time, released directly into the ocean without treatment. Hundreds of tons of DDT and PCBs were released into the ocean off the Palos Verdes Peninsula. While the manufacturing and untreated disposal of DDT has been banned in the United States, the molecule itself still persists in our local water and seafood.

Now, back to the question about fish skin. POPs are a particular threat in fish because marine and freshwater ecosystems are significant reservoirs for persistent pollutants. POPs are brought to aquatic locations by runoff, wind, or other means, and they stay in those ecosystems sequestered in organic sediments. These sediments are sometimes known as “sinks” because they can harbor POPs for hundreds of years.

These POPs are brought into the food chain by bottom feeding fish. Pollutants accumulate up the food chain, concentrating to levels that can be thousands of times higher than in the water around them, otherwise known as bioaccumulation. In addition, plastic pollution is widespread, and further exacerbates the issue. If microplastics are present in the water, POPs adhere to the plastic, concentrate further, and lead to the risk of even higher concentrations of POPs entering the food chain.

Fish mainly absorb POPs from sediment. Bottom feeding fish stir up sediment to find food, absorbing POPs through their food and digestive tracts as well as their gills. Once inside the body, POPs dissolve into the fish’s fat for long-term storage. Normal fat stores in fish (and in humans) are located in the liver and the subcutaneous fat, which is the layer of fat directly under the skin. That said, it’s not technically the skin of the fish that stores the pollutants, but the layer of fat just below the skin. When eating potentially contaminated fish, removing the fish skin also removes this layer of fat where the POPs are stored. And that’s why it is recommended to skin certain types of fish caught in LA before eating.

How does this relate to Heal the Bay?

Heal the Bay’s Angler Outreach Program educates pier and shore anglers in Los Angeles and Orange County about the risks of consuming fish contaminated with DDT and PCBs. Created in 2003, the program is a component of the Fish Contamination Education Collaboration (FCEC) and managed by the US Environmental Protection Agency (EPA) as part of a far-reaching public education and outreach program. 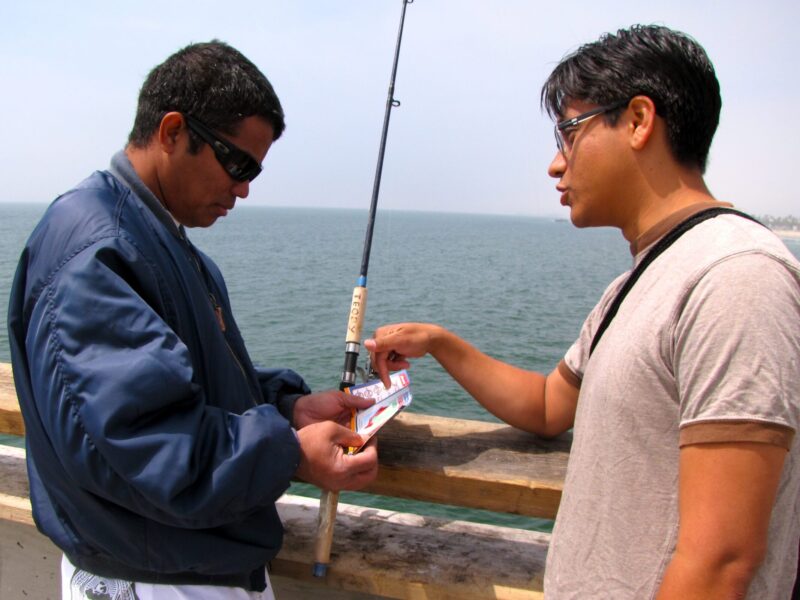 What can we do about this pollution?

Los Angeles is taking measures to reduce pollution. It’s nearly impossible to remove POPs from our environment and wildlife, so the goal is to stop any more from entering. The next storm drain permit, also known as the municipal sperate storm sewer system (MS4) permit, could be strong enough to enforce and reduce local pollution via the regulation of industrial discharge of wastewater into storm drains. A recent supreme court decision  reinforced MS4 permit regulatory standards.

Individually, the best first step is to educate yourself on which fish are safe to catch and eat   in Los Angeles and how to prepare them safely. To advoate for clean water, you can contact your local water board and share your support for a simple, transparent, measurable, and enforceable MS4 permit that reduces the amount of new pollutants that enter our environment. Read our recent blog on the MS4 permit to learn more and sign up to stay updated on MS4 calls to action.