What This Election Means For the Bay

While California waits for the last 3 million mail-in votes to be counted, it is projected by a number of influential media outlets that Proposition 67 will PASS! Once the Secretary of State declares the results official, the plastic bag ban will go into effect immediately. This makes California the first state to pass a comprehensive ban on single use plastic bags. As the nation looks to California as a progressive environmental leader, we hope that our hard-fought, grassroots-led victory inspires other states to enact a bag ban of their own.

We’re grateful for the passionate, powerful coalition of environmental groups, community leaders, and dedicated volunteers, without whom this victory simply wouldn’t have been possible.

For the latest Prop 67 results coverage, check out the Sacramento Bee and New York Times.

Nov. 9, 2016 — Tova Handelman, Heal the Bay’s Coastal Resources Coordinator, dives into the election results and finds some treasures worth celebrating.

So much has happened in the last 24 hours. The dust has yet to settle from the presidential and state elections. Through the haze, it can be hard to see the long, grueling path that led us here. Even more uncertain is what the road ahead looks like for the country, and its environmental progress.

Well before the primaries and up until yesterday, Heal the Bay – alongside our incredible partner organizations, and fueled by dedicated members like you – led efforts to enact some real environmental change locally and across California during this election season. We advocated for several propositions and city measures before, and are truly proud to see the results of our efforts this time. This campaign season has given us a lot of firsts–some good and some downright puzzling. But we are proud to say that this is the first time we’ve seen such across-the-board success for the environmental measures we worked so hard to endorse.

Let’s take a look at some key environmental measures on the ballot–and what will happen next: 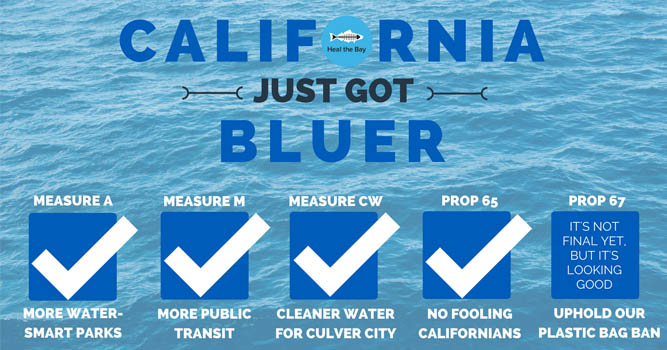 A big victory with a huge margin, Measure A passed with 73.5% of the Los Angeles vote. This means that an annual parcel tax of 1.5 cents per square foot of development will generate approximately $94 million per year. This money will go directly to local communities to protect, enhance, and maintain our local parks, beaches, and open spaces.

Sick and tired of traffic and its effect on air quality in Los Angeles? You’re not alone: Measure M passed overwhelmingly with nearly 70% of the vote – well over the two-thirds share it needed to pass. Measure M adds a half-cent sales tax and extends the existing half-cent increase passed in 2008 with Measure R. This tax will generate $120 billion over 40 years to fund major extensions to subway lines, including a line under the Sepulveda Pass to connect the San Fernando Valley to West Los Angeles.

Residents of Culver City voted to create a dedicated funding source in the form of a parcel tax to pay for water quality programs that will prevent pollution in our waterways, beaches, and the Ballona Creek Estuary. The tax is expected to generate $2 million per year, and all money will be used in Culver City to reduce water pollution. This will ultimately help to improve water quality in Santa Monica Bay!

Try as they might, the plastic bag manufacturing companies behind Prop 65 couldn’t trick us into undoing California’s plastic bag ban. This proposition was intentionally vague to confuse voters by thinking they were voting for an environmental fund, when the fine print actually said the bag ban would be overturned should Prop 65 pass. Thanks to our tireless volunteers and incredible efforts from partner organizations, we were able to get the word out and educate voters on the issue. Looks like Californians do their homework, because we are now one step closer to banning plastic bags from grocery stores statewide.

Proposition 67: NOT FINAL YET, BUT IT’S LOOKING GOOD!

Heal the Bay has been working for years to eliminate plastic pollution from our waterways and beaches. Two years ago, we rejoiced when SB270 passed, making California the first state to ban plastic grocery bags. The plastic bag manufacturers didn’t take the news well, however, and spent over $6 million to get the bill back on the ballot as a referendum in the form of Prop 67. Our volunteers spent long days at tabling events and long nights phone banking to encourage voters to uphold our statewide plastic bag ban, and it seems like their efforts paid off. The polls are too close to call just yet, but the projections are promising. Once the final verdict is called, the plastic bag ban will go into effect immediately at grocery stores, pharmacies, and liquor stores across the state. Paper bags will still be available for 10 cents. Over 660 ocean species have been found to ingest or become entangled in plastic pollution, so a statewide ban is a HUGE victory for the environment–and ocean animals.

Though it is unclear what will play out nationally, there is one thing you can certainly count on: Heal the Bay will continue to fight to protect what you love. Supported by thousands of ocean-loving Angelenos and guided by sound science, we will press on to advance local, regional, and statewide environmental policies and educate the next generation of ocean advocates.

Thanks to you, we won so much yesterday. And with your help, we will continue fighting, stronger than ever, for a cleaner, healthier, bluer Los Angeles.